The trial of the unbankable Ukrainian oligarchs: Pinchuk, Kolomoisky and Bogolyubov forced to settle out of court

By John Helmer, published on his website Dances With Bears, Monday, Jan 25, 2016

MOSCOW – Gennady Bogolyubov, Victor Pinchuk, and Igor Kolomoisky (lead image, left to right), the three Ukrainian oligarchs who settled their business differences last Friday, were afraid to risk their bank credit lines if a High Court trial, scheduled to commence this week, went ahead. Sources close to the three men say it proved easier for them to agree on a secret money deal between themselves than to trust a British judge to assess their deal-making record in public. 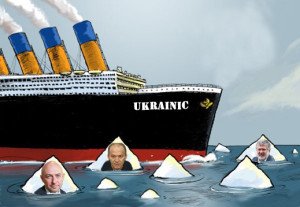 ‘The Ukrainic’ (image by John Helmer)

“MAD, Mutually Assured Destruction – that was the outcome if the three oligarchs went into court against each other”, says one source. The sources confirm a report circulating in Kiev and another in Davos that Kolomoisky and Bogolyubov have agreed to pay Pinchuk $500 million in installments over several years. The money may come from assets jointly owned by Kolomoisky and Bogolyubov; these include Privat Bank, the Nikopol ferroalloy refinery, or the Krivoy Rog iron-ore combine, which has been the focus of the most recent dispute. Pinchuk’s public relations agent in London, William Clutterbuck, released the settlement announcement in a brief email. Lawyers and associates of Kolomoisky and Bogolyubov refuse to speak.

“The fact that this was settled at all,” comments one of Pinchuk’s creditors, “suggests Pinchuk’s case had some merit after all; that he was not about to run out of funding for his legal fees; and the defendants found the allegations about to be aired [in court] unduly embarrassing. This was a fist-fight in the ballroom of a sinking Titanic. Both sides have finally agreed to abandon their primary pursuit and head for the rescue vessels instead. They might even be sharing one.”

Pinchuk opened the UK High Court proceeding in May 2013 with a claim for $2 billion in compensation for his stake in the Krivorozhskiy Zhelezorudnyy Kombinat (KZhRK, Krivoy Rog iron-ore plant). In his court papers, Pinchuk claimed he had paid $143 million for shares her didn’t receive. For details, read this. Based in the Dniepropetrovsk region of eastern Ukraine, the iron-ore plant reported net income for 2014 of 1.3 billion hryvnia ($63 million). Since then, as global demand for iron-ore has dwindled and export prices have dived, along with trading conditions in the Ukraine, production at KZhRK reportedly dropped by 2% in 2015, and sales revenue by more, discounting the asset value which Pinchuk has been claiming in London.

Kolomoisky, who lives in Geneva and works between Ukraine and Switzerland, and Bogolyubov who lives in London and directs his businesses from there, argued in their court papers that Pinchuk and his father-in law, then-Ukrainian president Leonid Kuchma, corruptly manipulated the privatization of KZhRK for their personal gain, and attempted to cheat them with terms of agreement they hadn’t signed. According to pleadings filed separately in court, the evidence was lacking for Pinchuk’s version of the KZhRK deal. The duo said there had been meetings in various places and at various times, some of which Bogolyubov didn’t attend at all. Pinchuk’s version of the oral record was disputed by witnesses who include a well-known rabbi. According to Kolomoisky, such documents as were negotiated between the duo and Pinchuk concerned other assets engaged in the production of manganese and ferroalloys, not iron-ore. For more, read this. 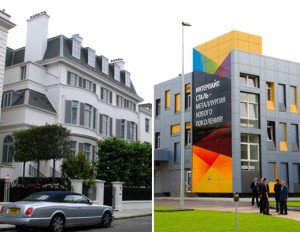 Pinchuk has a home and headquarters for his EastOne asset holding in London.

Pinchuk’s steel and pipemaking company in Dniepropetrovsk, Interpipe, has been under pressure from bank and bond creditors since it defaulted in November 2013 on $1 billion of debt, including $200 million worth of bonds. The $500 million he has won from Kolomoisky and Bogolyubov may now be shared with the banks and bondholders, although lawyers involved suspect the settlement deal he has struck may shield him from the legal obligation to do so. Pinchuk’s Ukrainian bank, Credit Dnepr, has also been under pressure from the International Monetary Fund (IMF) and the National Bank of Ukraine to obtain fresh cash liquidity from Pinchuk as its control shareholder to meet new solvency targets.

A source following Pinchuk’s arrangements with his creditors speculates that with a $500 million payout from Kolomoisky and Bogolyubov, “this sort of money would then be more than sufficient to repay the $200 million in bonds owed by Interpipe, of which Pinchuk might control 60% plus. On the other hand, prior to and anticipating the settlement, Pinchuk might have further increased the percentage of bonds he controls on the cheap, and bought up other receivables prior to the settlement announcement.”

Ukrainian and Russian media reports, echoing Reuters, the Wall Street Journal, and Fox News, claim that Pinchuk has been under pressure not to allow the High Court case to go ahead because of the evidence that might be forced into the open. Pinchuk is reported in the US to be under investigation by the Federal Bureau of Investigation (FBI) for $13 million in donations he has made to the Clinton Foundation. The money, according to Russian investigations, came in part from theft and fraud involving $210 million at the Rossiya insurance company, which Pinchuk owned in Moscow and which he looted, according to Russian prosecutors and Moscow insurance regulators.

US media reports claim the FBI is investigating the relationship between Pinchuk, Hillary Clinton, her daughter Chelsea, her son-in-law, and the Clinton Foundation to determine “whether donors benefited from their contacts inside the administration.” Details of Pinchuk’s connexions to Clinton and his business benefits have been reluctantly disclosed by US reporters. For more on Pinchuk’s lobbying of US officials to obtain steel trade concessions, read this.

US media have been keen to attack the Democratic Party’s front-running candidate for president, but reticent to expose secret US assistance to Pinchuk and other Ukrainian supporters of the war against Russia. The newly released archive of Hillary Clinton’s personal emails can be searched here. There are several references to Pinchuk; none to Kolomoisky or Bogolyubov.

According to the US Ambassador to Ukraine, John Tefft, on January 24, 2012, “Chelsea Clinton is in Kyiv with her husband, Marc, at the invitation of oligarch, Viktor Pinchuk. She spoke this afternoon before 300 young university and graduate level students; Mariella and I were there along with a huge media presence. Chelsea was really effective… She is going to speak at a Pinchuk seminar at Davos as well this week. ”

An email of June 12, 2012, to Hillary Clinton from Melanne Verveer, a Ukrainian-born protégé of Clinton’s, says: “I had breakfast with Pinchuk. He will see you at the Brookings lunch.” Pinchuk was paying a US lobbyist $40,000 per month to arrange these meetings; he was also paying $200,000 per annum to Brookings for a seat on its council, and to employ an ex-US ambassador to Ukraine, Steven Pifer. For more details, read on.

An email from Clinton’s chief of staff Cheryl Mills to her boss, dated October 10, 2012, reveals that Pinchuk was helping the US Embassy in Kiev run what it called a “TechCamp” . The political propaganda objectives were explained in the email this way: “[Ukrainian] Civil society leaders received hands-on training in a variety of areas including using Facebook for social media engagement, increasing outreach through online collaborative learning, filming low cost video for outreach and engagement, creating effective websites for NG0s, making use of mapping data to advocate for change, and encouraging transparent governance to improve education.”

Kolomoisky has been under investigation in the US in several civil court cases involving real estate, steelmills, and other alleged business misconduct; see this. His role in diverting IMF funding for PrivatBank is also under international scrutiny.

Bogolyubov has avoided adverse attention from the Ukrainian media since the replacement of the Yanukovich administration in February of 2014. In May 2014, his Australian and African mining company, Consolidated Minerals, successfully refinanced $400 million in bonds held by US investors, and due for repayment in 2016; the new obligations do not fall due for repayment until 2020. Most of Bogolyubov’s metals and mining business is now outside the Ukraine and outside the US. 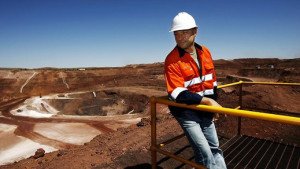 Bogolyubov at the Greensnake mining pit in Western Australia (The Australian)

Much of Bogolyubov’s real estate assets is concentrated in London. He avoided further disclosure of those when he settled another High Court lawsuit, alleging he had failed to pay commission and profit share on several of his deals.

Three sources familiar with last week’s settlement negotiations say they succeeded because each of the parties wanted to avoid testifying under cross-examination, and “the risk of Boris Berezovsky’s fate.” For more details on the Berezovsky case and the final judgement, see this.

According to one of the sources before the Pinchuk settlement was announced last week, “the UK court proceeding adds to the bank financing risk for all three. The court may rule that one or more of the parties has acted and testified dishonestly. Therefore, there may be a seriously negative international court judgement against one or all of the parties, which currently does not exist. Or the process may be protracted for years, casting uncertainty over the bankable reputations of the three businessmen. From the bank refinancing point of view, the optimum solution is a confidential settlement as soon as possible.”

The sources report that if the High Court had commenced hearing the case this week, there was the risk the judge would condemn the plaintiff as well as the two defendants. “Judges in the [UK] Court of Appeal have been less reluctant [than High Court judges] to call Russian-type [sic] litigants liars and crooks,” one of the sources said. “And because the higher judges are calling these litigants liars, the lower court judges are following suit.”

In Kolomoisky’s case in particular, one of the sources warned he could not avoid testifying under cross-examination, which he has managed to do in his US court cases. In his case, “there is the risk of theatrics. In the Berezovsky proceeding, [Roman] Abramovich was able to respond more effectively to coaching by his team on how to present himself in the witness box; Berezovsky refused to follow his team’s coaching, and was easy to provoke, with disastrous effects. In the [Mikhail] Chernoy proceeding, both Chernoy and [Oleg] Deripaska underwent two years of special coaching, but both ended up afraid of what would happen when they came under cross-examination by a skilled QC.”

Deripaska agreed to settle Chernoy’s High Court claim in September 2012, after the trial had started but before it reached cross-examination or judgement. The confidential settlement obtained by Chernoy was $500 million in instalments over 5 years, , part paid by Deripaska, and part by Iskander Makhmudov. “If Pinchuk gets $500 million from Kolomoisky and Bogolyubov”, calculates a UK High Court specialist, “it will match the record for Russian and Ukrainian litigation in London.” From his defeat of Berezovsky, Abramovich won only his costs of £35 million.