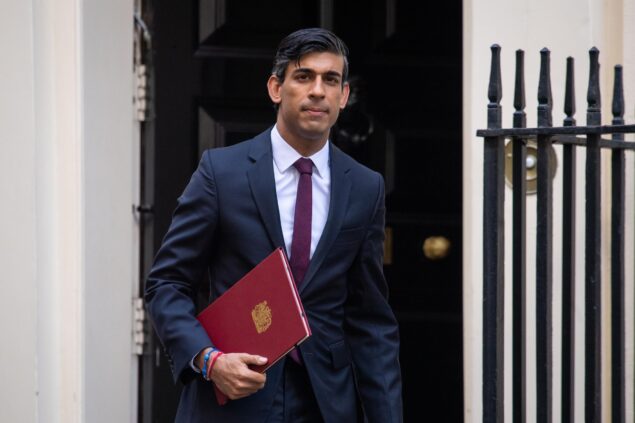 Since class warfare is being waged, anyone who preaches social peace now is simply making it harder for the working class and its allies to defend themselves against a major defeat.

Recently the Chancellor Rishi Sunak won widespread plaudits for altering the terms of his financial support for workers whose jobs are under threat because of the restrictions introduced in response to the pandemic.  The furlough scheme is back, leaving the workers affected with just 80% of their wages, rather than 67%.

This was simply a tactical retreat.  The government has clearly signalled it is conducting a ferocious attack on living standards but has had to recalibrate what it can impose right now.

It should be clear that the scale of this attack on the living standards of the working class and poor, is much more ruthless than the austerity of 2010 or in some respects even than Thatcher in the 1980s.  As a result, it should be equally clear that success for the government would be a decisive shift in favour of big business and the rich, at the expense of workers and the poor.

Since class warfare is being waged, anyone who preaches social peace now is simply making it harder for the working class and its allies to defend themselves against a major defeat.

Ratcheting down, not levelling up

The claims that the Boris Johnson government is engaged in ‘levelling up’ poorer areas of the country belong with the falsehoods that he is ‘implementing Corbyn’s policies’, is ‘spending like a socialist’, has ‘abandoned austerity’.  They are all pure hokum. They are proposed by those wishing to blunt any opposition to the government, and repeated by those who clearly do not understand what is going on around them.

All these claims fall apart as soon as the government meets any resistance, as the excellent campaign for free school meals by Marcus Rashford and others shows.  Donating £12 billion to SERCO, Deloitte’s and other private sector companies, most of whom are intimately connected to the Tory Party, while they for long refused £120 million for free school meals is not levelling up, implementing Corbyn’s policies or socialist spending or any other of the spurious claims.

Austerity is properly understood as a transfer of incomes and wealth from poor to rich, from labour to capital. So, in the very first austerity Budget by Osborne and Cameron there were £12 billion in cuts to social security while business taxes were cut by almost exactly the same amount.  Clearly, even in simple accounting terms (leaving aside any economic effects) this had nothing to do with reducing the deficit, as was claimed.  But it did transfer government spending from the poor to the rich. Austerity has continued in the same vein, with varying intensity ever since. Previously, Thatcherism used the cloak of monetarism in order to effect exactly the same type of transfer, largely through an assault on the unions and tax breaks for the rich.

In the same fashion, the overwhelming bulk of every package announced in the current crisis is to benefit big business.  So, of the initial £330 billion emergency package that was finally announced after the March Budget, £300 billion was in the form of loan guarantees to the banks to avoid losses on their business lending.   In contrast, just £1.6 billion is for local authorities who are under enormous pressure both from reduced revenues and much higher outlays to meet the mounting effects of the crisis caused by the pandemic.

The attack on the working class

The centrepiece of the class warfare being waged by big business and their government is on wages, hours and employment.  Here, the ratchet down effect is the most wide-ranging in its effects.

This is easy to demonstrate.  Before the crisis began, however low wages were for workers across many sectors, they did at least receive 100% of those wages.  Under furlough conditions, where work was supposed to be suspended, this has been reduced to 80%.  At the same time, and completely against the rules, many companies committed fraud by forcing staff into work for no additional pay. Up to a third of all employees were asked or forced to come in, according to one estimate.

In addition, a large number of firms are in the process of making that reduction permanent.  Three high profile employers, British Gas, British Airways and the BBC have all launched fire and rehire schemes to reduce wages and conditions.  Many others are following suit but are less well known.  As the end of the previous furlough scheme approached, the government tried to enforce a reduction to 67% of wages for some topped up by 5% from employers, and no support at all for those caught in the spurious ‘Tier 2’ restrictions.  The fear over the probable immediate collapse in jobs forced a tactical retreat.

Now that furlough is back, there has been a return to 80%, at least for the time being. But even if this is the full extent of the reduction, it still represents an enormous and dramatic shift from labour to capital.  Nothing on this scale was achieved under austerity.

The intention of the ruling class and the Tory government is as far as possible to make this reduction permanent.

Mainstream economists have long studied the issue of the determinants of wages for obvious reasons.  There is a whole literature devoted to what they describe as the problem of rigidities that lead to ‘sticky’ wages, that is the difficulty in driving down nominal wages (here is just one example pdf, there are innumerable others).

This ‘stickiness’ of wage growth is shown in Chart 1 below.  The annual growth in wages in nominal terms is shown in orange, the growth in wage in real terms (after adjusting for inflation) is shown in blue.  Nominal wage growth hardly fell at all in the last recession.  The brief dip in wages occurred in the first few months of 2009 and began to recover very slowly in later months.  It was only the simultaneous fall in the value of the pound, which drove up prices in an economic slump, which caused real wages to fall over a more prolonged period, from mid-2008 to the end of 2009.  But even wages in these terms began to recover in early 2010.

Real wages for public and private sector workers fell after the June 2010 ‘emergency Budget’ all the way through to October 2014.  This was a result of government policy.  Only as the Coalition government geared up for an election the following year by loosening government spending did real wages start to crawl higher.  The austerity policy was highly successful in cutting real wages, as it was designed to do. 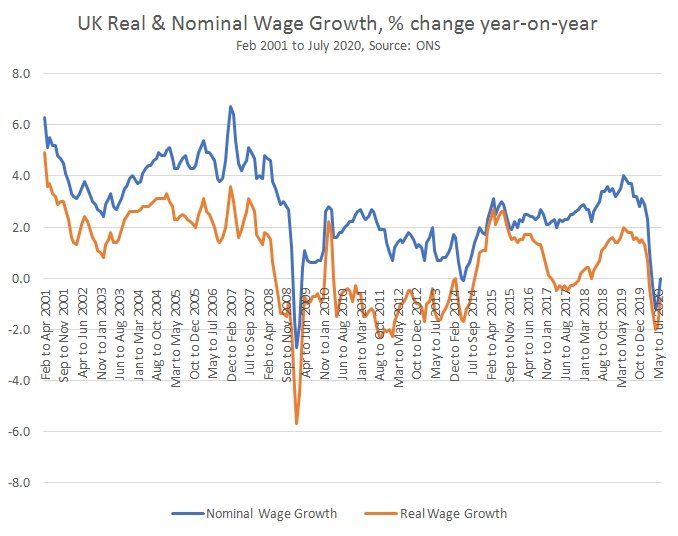 If everything else is unaltered, the combination of economic weakness, rising import prices and rising real wages from 2010 onwards was bound to damage profits severely. The centrepiece of the austerity policy was to combat this profits-damaging combination of factors.

The chosen method was a public sector pay freeze.  Not only did this have the direct impact of cutting real wages (as well as cuts to pensions) for approximately 1 in 6 UK workers (over 5 million of them) in the public sector where union densities are highest, but it also had a ‘demonstration effect’ (pdf), of setting a nominal wage freeze or similar in the private sector as well. With prices still rising because of the effects of the weakness of the currency, real wages for workers started to fall once more.

However, as appealing as it may be to employers to cut wages if they can, this does not by itself resolve the issue of profitability especially if the overall business conditions are characterised by sluggish growth and rising import prices. The austerity policy of driving down wages was only successful in raising the level of misery. It was not successful in its overall aim of raising profits.

Worse, from the perspective of the architects and supporters of austerity, nominal wage growth continued to rise at a very modest pace after 2014 and continued to rise until the current pandemic began.  Real wage growth was more erratic, undercut by rising inflation once more in 2017.  But even so, no blow had been struck which cut wages sufficiently to raise profits on an enduring basis.

This trend in profits is shown in chart 2 below.  Initially, profits fell as they tend to during a recession.  Sales were falling and as noted above wages remain ‘sticky’.  (The ONS data shown is actually a measure of the rate of return on capital, not strictly profits, but it is a useful guide to profitability).  Subsequently profitability did recover but only moderately.

Yet profitability continues to remain below 2008 levels. And, as regular readers of SEB will know, profitability never rose sufficiently to spark an upturn in private sector investment. From the perspective of the capitalist class as a whole, there is no incentive to raise investment, which means adding to the productive capacity of the economy, if the rate of return on existing investments is depressed below usual levels. 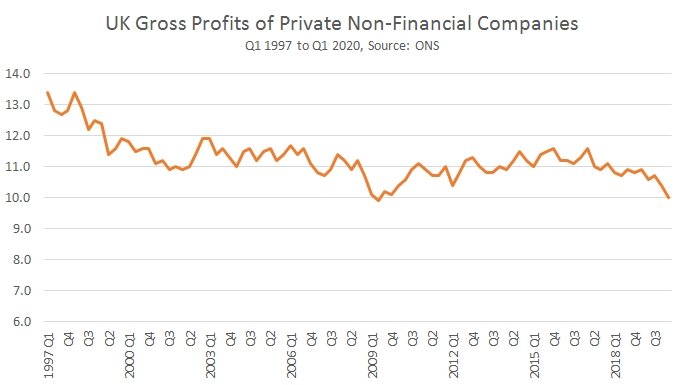 The reserve army of labour

In the last recession and under the austerity policy real wages fell initially by 6% and only recovered over a very prolonged period. Under Thatcher, real earnings for those in work did not fall at all.  Instead, her policy addressed the problem of low profitability by massive deindustrialisation that created 3 million unemployed.

The current policy is a combination of these two.  Through government policy wages are being slashed by 20% for very large parts of the workforce, even including those on the National Minimum Wage.  At the same time there is a sharp rise in the level of unemployment, and some businesses will fold.  The combination of these two factors, the sharp reduction of wages and the surge in unemployment is government policy.  It is a new development and its architects will be hoping that one reinforces the other, that much higher unemployment will be a decisive factor in keeping wages low long after the public health crisis is over.

This mechanism was first analysed by Marx as the creation of the ‘industrial reserve army’ of labour. Marx says the reserve army of the unemployed exists in no previous form of society except in capitalism, and is integral to it.

“The industrial reserve army, during the periods of stagnation and average prosperity, weighs down the active labour-army; during the periods of over-production and paroxysm, it holds its pretensions in check. Relative surplus population is therefore the pivot upon which the law of demand and supply of labour works. It confines the field of action of this law within the limits absolutely convenient to the activity of exploitation and to the domination of capital.” – Karl Marx, Capital, Volume One, Chapter 25

In general, high or sharply rising unemployment holds the risk that it may produce social unrest and political discontent.  The government of an advanced industrialised country may choose to engineer a sharp rise in unemployment in an attempt to restore profitability, or it may choose to try to cut wages.  But both stratagems entail high risk.  Combining the two is exceptionally high risk.  Only in a period of desperation and generalised crisis would they be attempted or could they be potentially successful.

Under the cloak of the public health crisis which their own policies have helped to create, the current government is attempting such a strategy. Naturally it is in the interests of all workers, all the oppressed and vast majority of society that they are not successful.