The time has come for the West to sit down, shut up and listen to the rest of the world 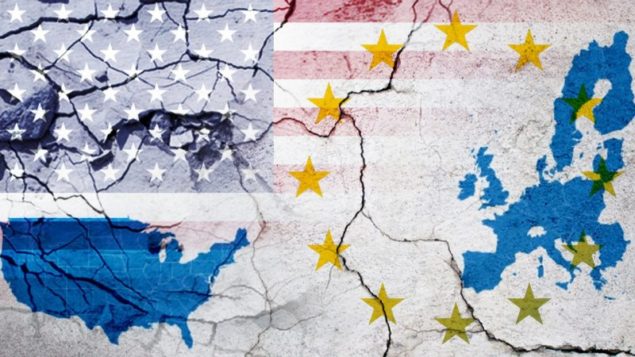 We are deeply saddened to hear of Andre Vltchek’s passing. We have lost a bold and distinctive voice that spoke truth to power and could see farther and more perceptively than most. He spoke for and from neglected places and peoples and did more to shift the stifling Eurocentrism from which our discourse suffers and which, in our time of massive shifts in world order, can only blind us. Andre was helping us to see more clearly and now we have to continue without his wise words.

This piece, one of his most recently published, is both timely and prescient.

Further reading: How we sold Soviet Union and Czechoslovakia for plastic shopping bags

We have always been told what to think and what is true from white dudes from Europe and North America. They knew everything, they were the most qualified, we were assured.

When I write “white,” I don’t mean just their race or color of their skin. To me, “white” is a cultural category, a kind of Western self-identity.

We Russians, Cubans, Venezuelans, Chinese, Iranians, Turks are not really “white,” even if our skin color is, nor are we trying to be white. We have our own way of living and thinking, and most of us are on the side of the oppressed; we firmly stand with the “wretched of the earth”, intuitively. For centuries, our nations have been plundered and attacked. Millions of our people vanished during invasions and genocides not unlike those experienced in Africa and other parts of the ‘non-white’ world.

We have always been studied, we have been analyzed, we have been described by those confident scribes and reporters coming mainly from the UK and North America. They know best who we are and what type of political systems and culture we deserve and should aim for. These people know how to speak. Their accents are so perfect, so “scientific.” If they say something, it must be pure veracity, because they are qualified, they have been ruling the world for centuries.

The white rulers of the world truly believe they know more about us than we know about our own people and countries.

And God forbid one of us ‘non-white’ individuals dare to publicly express a negative opinion about Europe, North America, or Australia!

Despite the fact that non-white opinions are generally ignored anyway, we are nonetheless not allowed to judge the West. We are to sit politely, submissively, to listen and to take notes.

Have you ever seen a Chinese person appearing on a British or US television show offering Communist analyses of the West? Have you seen an Iranian socialist or Venezuelan Chavista criticizing British or Canadian capitalism? That would be unthinkable, wouldn’t it?

And honestly, look at the so-called independent or ‘progressive’ media outlets in the United States or Canada. The situation there is basically the same with some rare, very rare, exceptions.

Once again, white, mainly Anglo-Saxon men “know the best”: be it regarding the recent anti-racist protests in the United States, or the origin of COVID-19. Even if they know precious nothing, absolutely nothing, they are still often considered to be the best informed, the most qualified “experts” because they have suitable names, looks, and pronunciation. Because they are white, groomed a certain way, and able to lie in the acceptable manner.

A few hours ago, I watched a recording, a dialogue between two ‘experts,’ which was uploaded online by “independent” North American media. They were discussing COVID-19.

What was particularly striking was the arrogance: “we know everything, and you know nothing”, the little sarcastic smiles; the two men were clearly demonstrating degenerate spite for the world. Naturally, both were white. Again I remind you I am not talking so much about their color of skin as their attitude and culture.

In the 40-some minutes during which they spoke, there were no references to the tremendous victory of China over the pandemic. No mention of Vietnam or Cuba. It was just them speaking. It was about them, about their world, and definitely not about the objective truth.

The same publication basically kicked me out, and stopped reprinting my essays immediately after our opinions began to differ on important topics such as the uprising in the

United States, COVID-19, and China. When I stopped behaving in accordance with white beliefs and values, I was out.

It was not my place or my right to speak about the West in this crucial historical moment. After all, I was just some Russia/Chinese other. This was the moment for the rulers of the world to shine. They and they alone were qualified to define the crises in their own society. Their publications closed their doors to those who were Other. Not all, but most certainly did.

These Others are sometimes allowed to criticize their own countries. They are once in a while permitted to trash their fellow non-white nations. But never, ever are they tolerated as prominent critics of the West and its rulers.

They are also not allowed to make any important intellectual judgments: in the West, Chinese people are not trusted to decide whether their country is Communist or not! Such decisions are made for them in Montreal and London, and if you dare to contradict Western Trotskyists or anarcho-syndicalists, you will be silenced, censored and prevented from publishing. It means nothing that China has one of the oldest and greatest cultures on Earth. Whether Iran is a socialist country is decided in Paris or New York, not in Teheran. What happened in the Soviet Union between the two world wars is not up to Russians to decide.

All great non-Western nations are expected to learn about themselves from some British, Swiss, Canadian deletants, whose only claim to fame is that they are white and from the West.

Once, a taxi driver in Tehran was complaining to me:

“White Westerners come to my country for the first time. They know nothing about Iran. But, 5 minutes into the ride, they begin lecturing me about my own nation.”

White Westerners are allowed to criticize whatever and wherever they want. It matters nothing how much or how little they know about it. Mostly they know nothing, absolutely nothing, but so what? Often, they even manage to infiltrate important media outlets and universities in independent countries and teach revolutionaries about their own revolution. Ridiculous? Bizarre? Yes, it is, but it is happening!

Now, as the West is collapsing, there are conspiracy theories flying around all over the place. Ridiculous, moronic inventions and speculations are printed day after day. Even some serious international media outlets based in the non-Western world have been falling into the trap. They are hiring entire armies of mainstream British, Irish, and North American writers to impress their readers who would never tolerate being ‘lectured’ by people of other colors and cultures.

The West, intellectually and morally confused and corrupt, has not been able to think rationally, it is thoroughly brainwashed. That applies to both writers and the readers. It cannot live without “familiar faces,” without familiar lines of thought.

Despite its confusion, it insists on talking. It demands to be listened to.

The West believes it is impossible to learn from others. It only knows how to dictate, how to preach, but what it says is nothing more than incomprehensible rubbish. It racist, phantasmagoric, irrational drivel.

Chaos and pathological lack of logic are upholding the status quo. Under such conditions, no progressive ideology could survive. Therefore, this is the most suitable milieu for the white Western boys and their global dictatorship.

It is time for the majority of Western speakers to shut up, start listening. Ideally, some would be held accountable for their actions. Easier said than done! But there is no other way.

As my tone might indicate, I am entirely fed up with this situation. I work all over the world, and thus have some basis of comparison. It is clear to me that most of the white Westerners have lost their creative edge. Their thinkers, writers, and filmmakers are mostly producing garbage. With some exceptions, the same can be said about academia and investigative journalism.

Russian, Chinese, and Venezuelan journalists can see the collapse of Western societies with much greater clarity than the Westerners themselves. They are, in general, much more qualified, educated, and able to describe reality and criticize objectively.

In the West, the level of ignorance is truly striking. Knowledge is not a requirement. Only pieces of papers, diplomas, and stamps supplied by the regime, are.

The world desperately needs to hear from The Others. As it needs The Others to get involved, to be themselves, to stop white Western boys from murdering millions and millions of innocent people in all corners of the world, as they have been doing for several centuries without interruption, just as much as it needs the Others to erect new concepts, new ideologies, and new moral principles.