The ties that bind Canadian military to USA 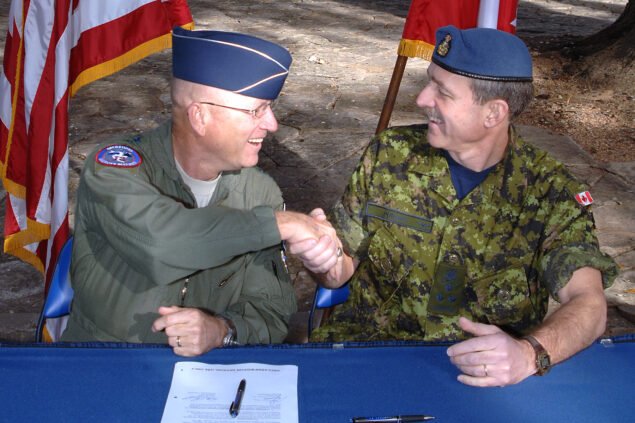 Canadian admirals and generals often act as if this country’s armed forces are an appendage of the US military, but it’s a mistake to simply label them US lackeys.

Canadian admirals and generals often act as if this country’s armed forces are an appendage of the US military, but it’s a mistake to simply label them US lackeys.

As I detailed recently, the Canadian Forces (CF) have assisted their US counterparts through naval missions, special forces deployments, peacekeeping missions, chemical weapons testing, wars and much more. Canadian military leaders are constantly seeking to strengthen their ties with the US military. In 2013 secret discussions were held to “fully integrate” the US and Canadian militaries, according to the CBC. The meetings for a “Canada-U.S. Integrated forces program” were “led at the highest levels, with then Chief of the Defence Staff Gen. Tom Lawson and the chairman of the U.S. Joint Chiefs of Staff, Gen. Martin Dempsey, meeting on ‘several occasions’ to hash out a plan that included an option for ‘fully integrated forces.’” Not shared with Canadian political leaders, the plan was to set up integrated air, sea, land and special forces to operate under a unified command when deployed internationally.

Over the years politicians have repeatedly restrained the CF leadership’s integrationist tendencies. As Janice Gross Stein and Eugene Lang write in The Unexpected War: Canada in Kandahar, “Canada’s generals and admirals tend to be more concerned about their relationships with their American counterparts than they are with their own political masters in Ottawa.”

The problem is significant. But instead of simply labeling CF leaders US lackeys, it’s important to understand the history and professional interest driving relations. The CF was set up to serve the most powerful military of the day. For decades everything was done to be “interoperable” with British military equipment, training and tactics. CF leaders gloried in empire and Britain’s quest for global domination.

As the US replaced Britain as global hegemon, CF leadership shifted its orientation from the chief conquering power to its successor. This shift was relatively seamless for economic, geographical, linguistic, cultural and racial reasons. It was but one part of a broader Canadian transition from a privileged position within the British Empire to a similar status in the US Empire.

In Canadian Gunboat Diplomacy Fred Crickard and Gregory Witol contrast the difference in thinking between the leaderships of five navies with historic connections to Britain. While the Indians, Argentinians and South African saw themselves “as hegemons or would-be hegemons of regional sea power,” write Crickard and Witol, “the Australian and Canadian navies left the mantle of the British Empire and donned that of the US Navy. The leadership in both countries see their navies as part of great armadas led by a major naval power prepared to fight anywhere on the globe.”

There’s a corporate element to the relationship as well. After retirement Canadian military officers often work for arms companies that are branch plants of US firms or heavily dependent on sales to the Pentagon. This increases CF leaders’ support of the US military-industrial complex. More broadly, the 1956 Defence Production Sharing Agreement (DPSA) effectively made Canada part of the US defence industrial base. The arrangement granted Canadian companies unique access to bid on US military contracts, the world’s most lucrative arms market. It offers them access to advanced military technology and facilitated participation in US firms’ global value chains.

The DPSA appealed to the Pentagon because Canadian firms were relatively sophisticated suppliers. But there was also a political element to the DPSA. The Pentagon wanted to tie Canadian firms to the US military industrial complex in the hope that would spur them to advocate a pro-US military policy. A 1958 US national security document described the importance of maintaining a “healthy” “Canadian defense industry” for the US to “receive the same excellent cooperation in the joint defense effort that has prevailed in the past.”

One way to look at the CF’s desire for close relations with their US counterparts is through the lens of professional hockey. Most players would prefer to be on the fourth line of an NHL club than the top unit of an AHL team. You may get less ice time but there’s better training opportunities and travel conditions as well as better pay and bigger crowds. In the military world, US forces have the best equipment and greater prospects of seeing action around the world.

Partnering with the US military offers CF members exciting opportunities and authority. After attending the Air Force’s Accelerated Aircraft Maintenance Officer Course in Texas and working at an Air Base in Qatar, RCAF Major Marcelo Plada told a US military website in 2019: “The Exchange Program has allowed me to grow my Aircraft Maintenance Management skills. I never would have had the opportunity to work at such a high warfighting level if I had stayed in Canada.” Similarly, general and future chief of the defence staff, Walter Natynczk, likely found it exhilarating to serve as deputy commanding general of the Multi-National Corps in Baghdad in charge of 35,000 international troops as part of the US occupation of Iraq. While attending US Army War College, Natynczk became Deputy Commanding General III Corps, helping plan the 2003 US/British invasion of Iraq from Kuwait.

Through their US counterparts the CF access “a sophistication of defence technology unavailable in Canada”, notes Ann Crosby in a book on NORAD. A Canadian general is the vice commander of NORAD’s advanced (mostly US) capabilities and runs the entire command when the US commander is absent.

Alongside better gear and opportunities, the CF/Canada is generally well treated. In 1996 Washington and Ottawa agreed “to share clean-up costs related to some former military installations in Canada,” notes P. Whitney Lackenbauer in The Cold War on Canadian Soil. “But the process was delayed by U.S. congressional concerns that this pact could be construed as a precedent for critics of American military activities around the world.”

More than any other country, US forces trust their Canadian counterparts. In discussing the two countries’ most significant bilateral military accord, Ann Griffiths explains, “NORAD brings the Canadian military more deeply within the US defense establishment than any other ally. The United States quite simply, would not entrust such responsibilities to the military of any other close ally, not even Britain.”

The critical discussion of Canada-US military relations focuses on CF subservience to their US counterparts. But, according to another interpretation of the relationship, the CF takes advantage of their US counterparts. In NORAD, notes Gordon Wilson in a book on that accord, the Canadians are “equal partners in spite of the difference of operational contribution.”

The benefits of this close relationship for the Canadian military seem clear. What is less discussed is the political price that is paid in terms of independence and sovereignty. Do Canadians want to be so closely tied to the US military and its policies around the world? Is it possible to be a force for good in the world while being, in effect, a junior partner to the US Empire?