The following articles are translated by New Cold War.org from the June 25, 2016 edition of the German daily newspaper Junge Welt (Young World). The controversy sparked by the articles continues and New Cold War.org will strive to report it through further translations. Volunteers able to assist with trnaslation are urged to contact the website at [email protected].

By Susann Witt-Stahl and Denis Koval, published in German in Junge Welt, June 25, 2016, translation to English by New Cold War.org

The Rosa-Luxemburg Foundation and the ‘new left’ in Ukraine have forged a pro-NATO course directed against Russia. 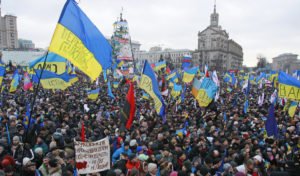 The Die Linke (Left Party)-affiliated Rosa Luxemburg Foundation wants to play it safe. It relies not on historical pro-Soviet or Marxist left traditions but instead promotes a “new left”. The foundation is named after a world-renowned icon of anti-capitalist movements whose identity is bound with communist and anti-imperialist ideas. But the members of the Foundation’s leadership recommend to the left a convergence with the ‘liberal imperialism’ of the global hegemon, the USA.

Understandably, this requires some political flexibility. Progressive forces should not plant themselves on one side or the other of competing imperialist powers, says the Facebook page Rosa-Luxemburg-Stiftung Ukraine. It demands that the “independent left” distance itself from the NATO-EU bloc, on the one hand, and from Russia on the other hand. 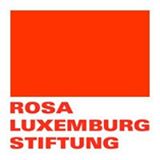 This agenda is followed by the Rosa Luxemburg Foundation (RLF) with its Ukrainian partners. But it never explicitly speaks out against the accelerated expansion of the Western powers to the very borders of the Russian Federation. Instead, it consistently warns about “Great Russian chauvinism” and denounces the former Soviet Union and the anti-imperialist left.

In Ukraine, the Foundation cooperates principally with the small ‘Left Opposition’ group (not to be confused with the political front of the same name in which the Ukrainian Communist Party participates). In April 2014, the Left Opposition (LO) along with the “independent” trade Union ‘Zachist Prazi’ (Labor Defence) of Oleg Vernik merged into the ‘Social Movement’. The aim was to create an alliance (so far without any success) to be a Ukrainian version of Syriza.

One of the founders of the ‘LO’ is Zakhar Popovich, who in 2003 together with Oleh Vernik was expelled from the Trotskyist Committee for a Workers’ International (reported in Junge Welt) because of a lengthy fraud they perpetuated. They had collected donations for non-existent left-wing organizations in Ukraine.

According to its self description, LO stands for a politics of peace, beyond the “nationalist polarisation” of pro-Ukrainian and pro-Russian forces. But it doesn’t dare to criticize Ukrainian ultranationalists. LO has openly supported the assaults by Euromaidan. Zakhar Popovich and his comrade Vitaly Dudin, the lawyer of the Kiev Center for Social and Labor Research, are also RLF partners. They marched in Maidan Square with a red EU flag side-by-side with the ultra-right.

The LO also welcomed the political section of the EU Association agreement, which includes clauses providing for military cooperation of Ukraine with the West.

Accordingly, LO has nothing to do with the “opposition” anymore. In March of 2014, Zakhar Popovich characterised the Yatsenyuk coup government as “legitimate” and appealed “to all governments in the world and Russia to recognize it”. He announced that his support was only “practical”, not political, because of the numerous, Goebbels-type followers from the Svoboda Party who were in the government.

LO’s demand to end the civil war in eastern Ukraine is expressed by the fact that in 2014, Fedor Ustinov, a member of its organizing committee, voluntarily joined the Ukrainian extremist ’ battalion ‘Shachtarsk’ in order to participate in the “punitive expedition” against the insurgents in the unrecognized people’s republics of Donbass. The “American anti-imperialist response” to  the “imperialist aggression of Russia” needed to be strenghthened. In this way did Ustinov understand the “balancing to be done against the two rival “imperialist” camps.

The LO is not only in the pro-NATO camp with both feet, it is also in the rightwing quagmire. The ‘Social Movement’–that is, LO and Zachist Prazi–view the organisation ‘Autonomous Resistance’ as not only “comrades. In Odessa, they have gone so far as to hold a joint rally with fascists who organize memorial marches for Stepan Bandera’s Ukrainian Insurgent Army (UPA) which committed massacres during WWII (especially of the Polish civilian population) and collaborated with Nazi Germany.

The LO member and co-organizer Andriy Ishchenko was until 2004 the chairman of the Odessa cell of the Ukrainian National Assembly – Ukrainian People’s Self-Defence (UNA-UNSO), a fascist party and the core organization of the Right Sector. The UNA-UNSO’s paramilitary force contributed to the 2004 ‘Orange Revolution’ of the famous Atlanticist Viktor Yushchenko, who became Ukraine’s president in 2005.

Perhaps Andriy Ishchenko is now an ‘ex’ neo-Nazi? Hardly. Until today, he still welcomes his former comrades as “friends”. “I am not ashamed of my membership in this organization. We were in the forefront of the struggle of the Ukrainian people for their rights and the the social struggles of the’ 90s,” said Ishchenko in 2014, speaking about his unfinished past.

The fact that Andriy Ishchenko wants to help the Right Sector to become “left wing” is enough for RLF, apparently, to present him in its pages as a “left activist”. Moreover, to whitewash the pro-Maidan ‘Autonomous Resistance’, Nelia Vakhovska, the project co-ordinator of the RLF in Ukraine, and Ivo Georgiev, from the centre for International Dialogue and Cooperation of the RLF, call Autonomous Resistance a “citizens ‘ movement” in a published post titled ‘The life of left activists in Ukraine is dangerous‘. The RLF Facebook page provides weblinks to these neo-Nazi Banderites.

Although LO has a maximum of two dozen activist members, conferences and other events with speakers from the LO are promoted by RLF and LO’s positions are uncritically disseminated. This also applies to other structures from the spectrum of the ‘new left’ in Ukraine, for example, the magazine Prostory of the ‘Autonomous Workers’ Union’. The members of AWU regularly mobilize against “pro-Putin fascists” (their term for opponents of Maidan) and believe that there is “no alternative” to the “Anti-Terrorist Operation” taking place in Donbass.

Ukraine’s ‘decommunization’ law and other repressive measures against the Ukrainian Communists have opened space for what some critics call a “fake left” in Ukraine. The fact that this left holds a long-time monopoly on the funds of the Rosa Luxembourg Foundation is being hushed up.

The ‘new left’ is used to whitewashing the alliance of the Western powers with the fascists in Ukraine. They approve the cooperation of the NATO-oriented, Ukrainian economic elite with the Western neocons that took place on the Maidan and approve a new escalation against Russia.

The Rosa-Luxemburg Foundation was involved in the creation of the pro-Maidan ‘left‘. In April 2014, for example, it promoted a conference ‘The Left and Maidan‘ organized by its Ukrainian partners.

The conference also served as a founding Congress of the ‘Social Movement‘ − initiated predominantly by the Left Opposition. The results of a survey were presented at the conference, according to which 93 per cent of Maidan-activists were presented as “apolitical” and only seven per cent (including the socialists) were organized politically. Accordingly, the proportion of fascists and other radical Right involved inMmaidan was said to be very low.

In December 2015, the Rosa Luxembourg Foundation supported the event ‘Aspects of the media coverage of the military conflict‘ organized by the Centre for Labour and Social Research, including experts “reporting from the ATO-zone” (‘Anti-Terrorist Operation‘ is  the Kyiv government’s official name for the military offensive of the Ukrainian army in eastern Ukraine). As stated in the event announcement, the participants included Yana Salakhova from George Soros’ ‘Renaissance Foundation‘ and Igor Burdyga, a journalist, member of the LO and militant of the ‘AutoMaidan who believes the arsonists of Odessa on May 2, 2014 were “patriots” while the protests of the victims’s relatives were “ukrainophobic”.

The RLF also supports projects of the Visual Culture Research Center in Kiev. For example, in 2014, it staged a series of benefits named ‘Peace Is War‘ which featured pro-Maidan propaganda films that encourage the viewer to understand that the militarisation of Ukrainian society is a “consequence of Russian aggression beginning in March 2014″.

The Foundation similarly promotes moderate nationalists from the artist scene. Sergiy Zhadan, according to the RLF, is a “leftist writer”, but he will participate in the ‘Banderstad Festival‘, a large gathering of Ukrainian fascists taking place in August 2016.

The project-coordinator of the Rosa Luxemburg Foundation in Ukraine advocates a “real revolution” against communism.

Nelia Vakhovska is a journalist, translator and has for several years worked in Kyiv for the German-based Rosa Luxemburg Foundation. The 36-year-old Ukrainian is close to the small group ‘Left Opposition’ [of Trotskyist origin]. She is a supporter of the Euromaidan (which she calls “a real revolution”) and of the search for “new visions”.

“The right-wing in Ukraine presents no real danger to the basically liberal government in Kyiv,” she told a roundtable discussion organized by the Rosa Luxembourg Foundation (RLS) in Berlin in March 2014. She was describing the first government cabinet of Prime Minister Arseniy Yatsenyuk, which as we know was made up exclusively of the civil and extreme right-wing, including the Svoboda Party.

Vakhovska does not deny the right-wing violence taking place in Ukraine, but she produces her own interpretation, celebrating the Banderites and other fascist movements in the Ukraine. “The followers of [Stepan] Bandera are prompted by Putin’s propaganda,” says Vakhovska. Her thesis should warm the hearts of all the anti-Russian hardliners in the left parliamentary partnership between the Green Party and the SPD (social-democrats) in Germany. But any socialist should be horrified over her words. Apparently, Vakhovska overlooks the hundreds of uniforms and flags bearing symbols of Bandera’s WW2-era Ukrainian Partisan Army which were present during the Maidan protests as well as the five-meter-high portrait of the old-new national hero near the big stage in Maidan Square in central Kyiv.

Vakhovska also expresses quite specific views when it comes to the history of Ukraine as a former Soviet Republic. “The concept of the left is, of course, discredited, due to our Soviet past and to our post-colonial situation today,” she says. This view was not challenged at the Berlin event. There was no “counterview” at that event. The RLS fails to include anti-imperialist and other Marxist left views that would provide a plurality of opinion in its pages and at its events.

There are no nuances when Vakhovska makes her conclusions on the Ukrainian Communists who participated in the Anti-Maidan movement and whose activists have been forced into into exile by the new rulers. These communists had to flee or were imprisoned. The violent clashes between Euromaidan supporters and their opponents (including the Marxist organization Borotba) in Kharkiv and Odessa created a “point of no return”. But Vakhovska in her contributions to RLF blames not the fascists, who burned down the Trade Union House in Odessa on May 2, 2014, murdering 48 people, including a member of Borotba. On the contrary, Vakhovska presents a counter-explanation by the “new left” of events, along with a partner of the RLF, the Visual Culture Research Center. They call for shunning Borotba because it allegedly “supports the authoritarian Soviet past”. But Vakhovska doesn’t mention that together with her magazine Prostory, he is involved with the campaign against the Marxists.