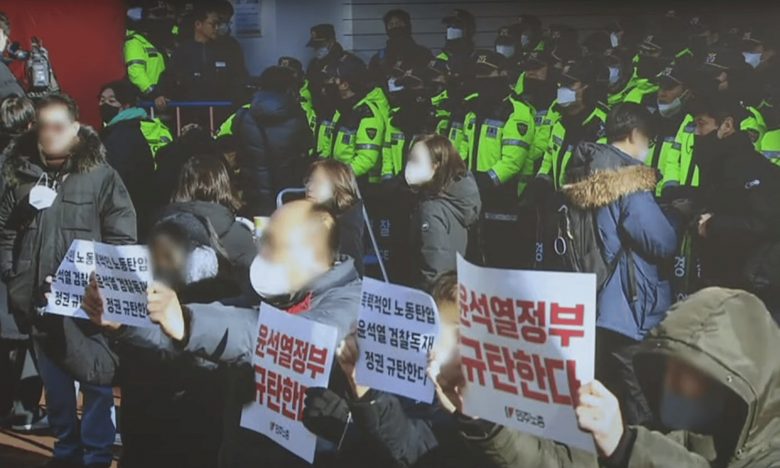 Progressive South Korean citizens have been watching with impending dread the deepening threats of political repression since the former prosecutor Yoon Suk Yeol assumed the South Korean presidency. On Wednesday, January 18, the Yoon administration took off its gloves.
_________________________

The KCTU is a one million-plus-strong umbrella organization of trade unions built to create labor solidarity against the neoliberal violence of the State-Chaebol (multi-national corporation) Capitalist formation.

A phalanx of police and NIS agents scrummed into KCTU offices in the early morning, and despite entreaties for legal observation and accompaniment, strong-armed their way into the offices in a violent search and seizure while hundreds of police barricaded the entrances downstairs.

Union leadership claim that one thousand police were deployed in this 10-hour political strip search of KCTU leadership.

Simultaneous raids were also conducted on the KHMWU (Korean Health and Medical Workers’ Union), and the KMWU (Korean Metal Workers’ Union). Union officers, organizers, anti-war activists, were swept up in these raids and private homes were also raided. Stunned union representatives called these actions “unprecedented,” “excessive,” and “a plan to suppress the labor movement.”

Raids were also conducted by the NIS against the ”Sewol Ferry peace shelter.” The Sewol Ho was a ferry that capsized on April 16, 2014, drowning 304 passengers, mostly working-class youth on a field trip to the resort island of Jeju. Told to stay on the boat and await a rescue that never came, the compliant youth slowly drowned in their cabins while texting their fear and regrets to their anguished loved ones, who had also been assured that a massive rescue effort was under way. No meaningful rescue attempt was undertaken. It is considered one of the largest civil catastrophes in South Korean history.

The ferry, unbeknownst to the passengers, had been transporting 278 tons of iron rebardestined for the construction of a U.S.-handy naval base on the southern tip of Jeju Island, as one element of the aggressive U.S. policy to contain China. The ship was poorly refurbished, overloaded with freight, navigating in inclement weather, and it capsized during a turn. Neoliberal deregulation, suspected urgency to complete the naval base construction, along with an 8-hour period of complete government inaction during the capsizing, resulted in the massive death toll. The peace shelter, with its motto of “we could have saved them all,” was a sanctuary of grieving, remembrance, and comfort for survivors, and place of solidarity for victims of state capitalist violence. That sense of safety and sanctuary was violated by the NIS raid on January 18.

A raid was also conducted on the offices of the June 15 Committee, a grassroots civil society seeking to build relations in hopes of reunification between North and South Korea. They had screened a North Korean film three years ago.

The ostensible pretext for these raids, as alleged by the government, was that all of these organizations had steered foul of South Korea’s National Security Law (see accompanying MR Online article) and were suspected of contacts or collaboration with North Korea to undermine the state. These allegations have been firmly denied by targets and challenged by assembly members.

It’s more likely that the real reason for this repression is that President Yoon has been facing massive opposition from the Korean people. There have been 23 mass street protests against the Yoon administration, with up to half a million people participating, demanding that that Yoon step down immediately.

There have also been mass labor strikes, most recently, a transportation union strike, and countless smaller regional actions.

These demands for Yoon’s resignation stem from his viciously oppressive anti-labor and anti-union policies—Yoon ran on a platform of instituting a 120-hour work week—and recently squelched the transportation strike by threatening strikers with imprisonment. Other reasons include his dismissal of colonial era atrocities in order to facilitate South Korea’s coordination with Japanese remilitarization—he is described as a “selling out his country”; his collaboration with the U.S. weaponization of South Korea as a tool to contain China; his oppression of the main opposition DP party, along with suspicions of spousal corruption.

The recent Itaewon crowd crush incident—a Sewol Ho redux—characterized by the same apathy and absence of government action for safety and human lives, along with an unending series of cringe-inducing foreign policy gaffes, has only added strength to these convictions.

These ongoing street “Candlelight Protests,” along with other civil society and labor actions, echo the name and sentiments of the powerful mass movement that removed the previous conservative president, Park Geun-Hye and her party from power in 2016. As a rebranded continuation of Park’s party, the current administration sees these actions and movements as an existential threat.

Facing stiffening headwinds, to preserve his role as a subcontractor to U.S. geopolitics and to maintain neoliberalism in South Korea, Yoon is reaching for the tried-and-trusty cudgel of South Korean dictators and autocrats, its 1948 National Security Law.

The modern capitalist state of South Korean was originally created as a U.S. neocolonial bulwark against communism in East Asia. Noting Korea’s overwhelming propensity toward socialist politics—a legacy of its traditional communitarian culture and its anti-colonial struggles—the country was sundered into North and South. The United States and its quislings then unleashed genocidal state violence in the South against workers, peasants, and socialists, smashing every progressive bone in the body politic and indenturing the South as a shattered subaltern to global capital. This process was scarified and sealed by war, and then splinted and dressed in decades of bloody military dictatorship.

South Korea’s National Security Legislation was imprinted into its institutions during this violent process, to ensure the continuity of the neocolonial capitalist state and to squelch all challenges to it. The Yoon administration’s actions are a re-expression of its original DNA.

As eager understudy and arrant errand boy to U.S. imperialism, President Yoon’s atavistic reversion to the habits of the past military dictatorships are likely to be glossed over in a western media that is eager to carry water for the global project of continued hegemonic U.S. capitalist unipolarity.

South Korea’s essential role as the closest and largest military force projection platform against China, its role in a “JAKUS” (a Japan-South Korea-U.S. military alliance) its cooperation with NATO, its stated plans to join a Quad-plus, and its assumption of a submissive position toward U.S. decoupling and economic enclosure against China make it far too valuable to criticize or undermine regardless of its excesses.

Within South Korea, criticism or reform of the National Security Law is a third rail that is rarely touched: that itself can be construed as a violation of the NSL.

Genuine solidarity is needed more than ever, to criticize and challenge this dangerous, atavistic turn in South Korea as the United States nudges itself and its quislings closer to the precipice of kinetic conflict. At stake is peace in the Pacific, and the future of a better world.

K.J. Noh is a scholar and peace activist focused on the geopolitics of the Asian continent. He writes for Counterpunch and Dissident voice, and reports for local and international media. 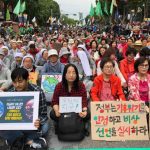 Why the Climate Justice March in South Korea Could Be a Game Changer for the EnvironmentClimate and Ecology, Republic of Korea