The pride of Israel: Assassinations 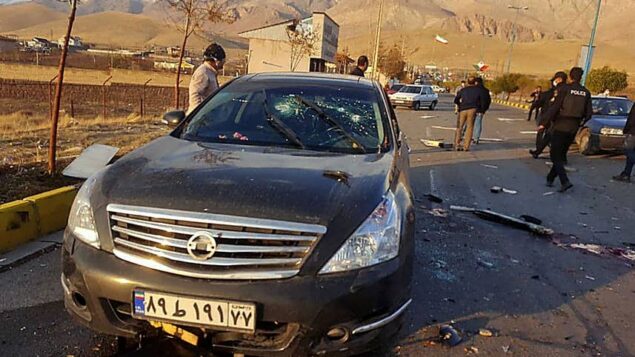 Alongside drip irrigation and cherry tomatoes, there are few areas in which Israel takes more pride than what it calls “targeted killings,” which are in fact acts of murder by the state.

Alongside drip irrigation and cherry tomatoes, there are few areas in which Israel takes more pride than what it calls “targeted killings,” which are in fact acts of murder by the state. With the exception of the United States, Saudi Arabia and Russia, there are few states that murder their adversaries or their enemies, certainly not in the large numbers that Israel does.

Since 2000, Israeli forces have murdered about 70 Palestinians, some of whom were clearly political activists and not militants, in planned, targeted killings.

The assassination Friday of Prof. Mohsen Fakhrizadeh on Khomeini Boulevard on the outskirts of Tehran was also not the first assassination of an Iranian nuclear scientist. Before him about a dozen scientists were murdered – most of them, if not all, presumably by Israel. How did Prime Minister Benjamin Netanyahuput it Friday, with a sly, knowing smile? “It’s been a week of achievements.”

These “achievements” indeed fire the imagination. On Channel 12’s Friday night news program, a panel of giants debated whether these were “gunslingers,” as the military analyst argued, or a powerful explosive device, as the Arab affairs analyst claimed. There was only one issue that was not raised in this, or indeed in any other forum: whether these targeted killings are legitimate. The very question is considered a heresy, treason. Was it not legitimate to take out Dr. Thabet Thabet, a dentist and the head of Fatah in Tul Karm, in December 2000? Was it not permitted to murder Khalil al Wazir(known as Abu Jihad) in his bed in front of his wife and children in Tunis in 1988? Don’t make Israel’s security cult laugh. Of course it was allowed. To Israel, everything is allowed. The Palestinians who planned the assassination of Tourism Minister Rehavam Ze’evi were sentenced to life in prison. The murderers of Abu Jihad became cabinet ministers and heroes. Ze’evi spilled more innocent blood than Abu Jihad ever did.

The question of the purpose and the usefulness of the assassinations is also barely discussed. The fact that the operations are so James Bondian and that the glorious Mossad and Shin Bet security service are behind them is enough to silence all such talk. If an operation is as successful as Friday’s, it’s a sign that it’s permitted and also worthwhile. All the other questions are simply subversive.

And yet, it must be asked: What would have happened had foreign agents wiped out Profs. Israel Dostrovsky and Ernst David Bergmann, Shalhevet Freier or Shaul Horev, the Israeli historic counterparts of Fakhrizadeh? What would Israel have said then? And how would the state have responded? Would it have stopped its nuclear program? Would it not have launched a campaign of revenge all over the world?

Amos Yadlin, a former Israel Air Force general who is the executive director of Tel Aviv University’s Institute for National Security Studies, tweeted over the weekend about Fakhrizadeh: “The man dealt with all aspects of Iran’s illegitimate nuclear activities.” A question: Is there such a thing as Israel’s “illegitimate nuclear activities”? If so, does its planner also deserve to be killed? If not, doesn’t this say that Israel is permitted to do anything, including things that are not permitted to any other state?

Communist Bulgaria assassinated people with poisoned umbrellas. Saudi Crown Prince Mohammed bin Salman, Netanyahu’s newest interlocutor, assassinated a man by dismemberment. The world views both as despicable actions by state agents. Israel is allowed. But Israel gets a free pass. We made jokes about Iran’s “Black Friday.” Israel is allowed to rub out the “father of Iran’s nuclear program” – of course that’s what he was, just as every assassinated member of Hamas is a “senior figure” in the organization – just as it is permitted to use types of weapons and ammunition that are prohibited to other states.

The question remains whether Friday’s murder will stop the Iranian nuclear program or, perhaps, accelerate it instead. Will it lead to a harsh reprisal attack? On this, the experts all actually agreed: Iran will certainly take revenge. And what then? Even then, will it have been worthwhile? Of course. After all, once again we showed them what we know how to do best, with the exception of drip irrigation and cherry tomatoes. To kill and to destroy.