The politics of World War Two in contemporary Ukraine 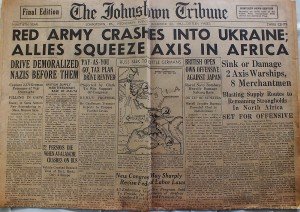 As part of the study, Katchanovski commissioned a research survey which was conducted by the Kyiv International Institute of Sociology (KIIS) and published in February 2012.

The 2012 KIIS Survey shows that the absolute majority of the residents of Ukraine, given a choice of the various forces active in Ukraine during World War II, support mostly the Soviet Army (75%). In addition, 4% favor the Soviet partisans. The Ukrainian Insurgent Army [militia led by ultrarightist Stephan Bandera] is a choice of 8% of the respondents. In contrast, only 1% support the German Army. The relative majorities (41% each) of adult Ukrainians have negative views of both Joseph Stalin and [Bandera cohort] Roman Shukhevych during the war. However, a much greater percentage (32%) hold very positive or mostly positive views of the wartime activities of Stalin, compared to Shukhevych (14%).

Read the full study by going to the weblink above.