The Persian Gulf crisis: beyond the Carter doctrine 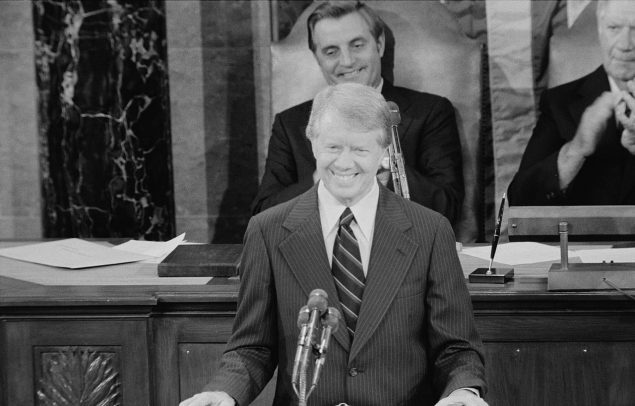 While the United States cannot be indifferent to the full implications of the current crisis in the Persian Gulf, a commitment to act militarily is not part of the Carter Doctrine. Indeed, it did not address situations like that being faced now. Two operative words in the one-sentence declaration cited above were “outside force.”

On January 23, 1980, President Jimmy Carter stood before the U.S. Congress and presented his annual State of the Union message. Its core analysis:

The region which is now threatened by Soviet troops in Afghanistan is of great strategic importance: It contains more than two-thirds of the world’s exportable oil. The Soviet effort to dominate Afghanistan has brought Soviet military forces to within 300 miles of the Indian Ocean and close to the Straits of Hormuz, a waterway through which most of the world’s oil must flow. The Soviet Union is now attempting to consolidate a strategic position, therefore, that poses a grave threat to the free movement of Middle East oil.

And the core of Carter’s response:

Let our position be absolutely clear: An attempt by any outside force to gain control of the Persian Gulf region will be regarded as an assault on the vital interests of the United States of America, and such an assault will be repelled by any means necessary, including military force.

This statement has often since been cited to demonstrate a blanket U.S. commitment to secure oil supplies from the region against all comers. Of course, oil has long been an implicit and sometimes explicit part of U.S. policy toward the Persian Gulf region. It’s being cited again today in calls for U.S. military action against Iran, which senior U.S. government officials, plus most of America’s regional partners, assert was the cause, directly or indirectly, of the recent attackson Saudi oil facilities.

Assuring the flow of oil from the Persian Gulf is clearly in the U.S. national interest. That has continued to be so even though the United States is, at least for now, a net exporter of hydrocarbons and is not deeply dependent on Persian Gulf oil supplies for its own domestic needs. But given the integration of the global economy and oil markets, a shutting-in of a major part of these regional oil flows would damage not just customers for that oil, notably in Europe and Japan, but also the United States. At a minimum, the rise of global oil prices, which has already been taking place in the last few days, would heavily impact the U.S. economy.

What the Carter Doctrine Really Meant

But while the United States cannot be indifferent to the full implications of the current crisis, a commitment to act militarily is not part of the Carter Doctrine. Indeed, it did not address situations like that being faced now. Two operative words in the one-sentence declaration cited above were “outside force.” That didn’t mean Iran, even though Teheran and Washington were then locked in confrontation amid the Iran Hostage Crisis. It didn’t mean Iraq, even though, in September 1980, Iraq invaded Iran, and later the United States not only backed Saddam Hussein but “reflagged” oil tankers as a legal (and force-triggering) protection against any Iranian efforts to stop oil flows from Iraq. There were U.S. national security—but not Carter Doctrine—reasons for these actions, whether justified or not.

Consider the circumstances in January 1980. To Western surprise, the Soviet Union had just invaded Afghanistan. It had forces capable of pushing into Iran, perhaps all the way to the Persian Gulf. Iran was in the throes of a revolution. The United States seemed paralyzed regarding what to do about the U.S. hostages held by the new Iranian government under Ayatollah Khomeini. Thus, the Carter Doctrine had only one purpose, other than to state the obvious (that the flow of oil was important): to deter the Soviet Union. I know. I was the lead National Security Council staffer for the Middle East at the time and had earlier assembled a group of four mid-level officials from State, Defense, and the CIA to consider broader policies for the region, while most of the administration was focused on the hostage crisis. Based on the work of this small group, I conceived the Carter Doctrine and, except for the “action clause” cited above, added by National Security Advisor Zbigniew Brzezinski, I wrote virtually all the State of the Union Address.

This was a remarkable commitment. It was not just an appropriate response to the uncertainties posed by Soviet military actions—where “uncertainty” can be the enemy of deterrence—but it was a commitment to defend an “enemy” of the United States at the time, the holder of American hostages. Maybe there is another example of a nation giving a security guarantee to an active “enemy” country, but I do not know of one.

The United States took many steps to back up this commitment, including deploying forces to the region and setting up military bases in several regional countries. But the purpose was both clear and limited: to make sure that Moscow did not miscalculate.

Only later did the Carter Doctrine get morphed into something broader, at least in the view of promoters of a wider set of engagements in the region. This wider set of engagements included, but was not limited to, protecting the flow of oil—the long-standing implicit U.S. interest. Indeed, protecting oil shipments in the Persian Gulf has, along with the U.S. commitment to Israel’s security, been an “evergreen” Middle Eastern interest of all U.S. administrations since the late 1940s, when Britain and France withdrew from the region.

What I have written here may sound Jesuitical, but it is not. It shows that the United States in 1980 was responding to the circumstances of the time—a palpable Soviet military and geopolitical threat—which circumstances collapsed with the end of the Cold War. The evergreen U.S. interests have continued, but without the overarching geopolitical implication—namely, that if the U.S. does not act, a major external competitor for power will fill the vacuum.

However much the current crisis might mean for the security of the flow of oil, there needs now to be a different kind of analysis and potential response from that posited by the Carter Doctrine. It includes making sure that regional countries do not themselves take actions that could impede the flow of oil—or drag the U.S. into an unnecessary war. That concern includes not just a country that we see as a “threat”—Iran—but also countries that we call allies. (In fact, they are just partners, not allies, since the U.S. has no treaty commitments with any Middle Eastern states against aggression, as it does with members of NATO—a distinction that really is a difference.)

Among other things, this means that these partner countries, along with the United States itself, need to be careful not to do things that could lead, through a series of escalatory steps, to major threats to the flow of oil. (The idea that Iran might close the Strait of Hormuz is nonsensical, unless U.S.-led sanctions would have already cut off all of Iran’s oil exports or it would be under major military attack, since it depends as much as anyone else on freedom of navigation.)

Preventing threats to the flow of oil—like the September 14 attacks in Saudi Arabia—also means that the United States must make clear-sighted assessments about threats posed by regional states, in this case Iran, along with potential U.S. responses. This has been got wrong for years. Thus, for example, among aspects of Iranian behavior the U.S. opposes and uses to justify tightening sanctions, Iran’s being the “largest state sponsor of terror” is not one: that title belongs to religious fundamentalists in Saudi Arabia, who are given free rein by Riyadh and tolerated by Washington.

The United States also must calculate as accurately as possible the relative balance of military power, in this case as between it and Iran. Iran is limited in its capacity to cause major direct military damage, but its capacity for asymmetrical warfare is extensive, as shown by the attacks in Saudi Arabia (even if Iran was not at all involved, the “message” regarding the ability of Iran or others to respond militarily against things that matter to the West is the same).

These U.S. calculations have to include recognition that, immediately after conclusion of the 2015 Joint Comprehensive Plan of Action (JCPOA), which trammeled any potential Iranian nuclear weapons program, it was not just Iran that took steps—notably testing ballistic missiles—to prevent the agreement from perhaps opening up a Washington-Tehran dialogue. Officials in the Obama Treasury Department immediately levied new sanctions on Iran as others were removed as required by the JCPOA. Bad faith was the common feature, and in diplomacy that is “not to be recommended.” This error was compounded by President Trump’s total withdrawal from the JCPOA, for whatever reason, whether because he genuinely believes he can “get a better deal” or just to trash an achievement by his predecessor.

Sanctions Are Acts of War

In virtually all current commentary about whether Iran committed an “act of war,” a leitmotif especially of Secretary of State Mike Pompeo, regularly overlooked is the fact that economic sanctions are always “acts of war,” even though not of a “kinetic” nature. That fact becomes even more patent when sanctions get near the point of crushing the people of the targeted country—as is now happening with Iran—with consequences that could have effects like those of kinetic actions (i.e., bombs and bullets).

Efforts to prevent threats to the flow of oil—or any conflict in the Persian Gulf that could lead to threats to outsiders’ interests—also must account for regional partners. Apposite here has been the continuing pressure from Saudi Arabia, the UAE, and Israel—among some lesser actors—for the United States to attack Iran, magnified by their influence in U.S. domestic politics. Indeed, some members of Congress who respond to these pressures now feel inner tensions with their awareness, hopefully shared by Trump, that war with Iran would not be in the U.S. interest and would be rejected overwhelmingly by the American public, absent a 9/11-type direct attack on the U.S. homeland.

Iran’s leadership, along with the United States and some of its regional partners, has created the current crisis, with both sides miscalculating their core interests and acting out of sheer stubbornness. The crisis can now as easily escalate into broader conflict, even because of some relatively small incident—call it the “Sarajevo Effect”—as lead to the much-needed prevailing of “cooler heads.”

In any event, we should not use the 1980 Carter Doctrine to either require or justify moving toward war.

*****
Robert E. Hunter served as US ambassador to NATO (1993-98) and on the National Security Council staff throughout the Carter administration, first as Director of West European Affairs and then as Director of Middle East Affairs. In the last-named role, he was the White House representative at the Autonomy Talks for the West Bank and Gaza and developer of the Carter Doctrine for the Persian Gulf. He was Senior Advisor to the RAND Corporation from 1998 to 2011, and Director of the Center for Transatlantic Security Studies at the National Defense University, 2011-2012. He served on the Pentagon’s Defense Policy Board and is a member of the American Academy of Diplomacy.
Editors’ Note: While we don’t necessarily share the views we publish on New Cold War, we do attempt to provide readers with a range of views. This is because your right to make your own mind up depends on your being fully informed.
Share
Tweet
Share
Pin