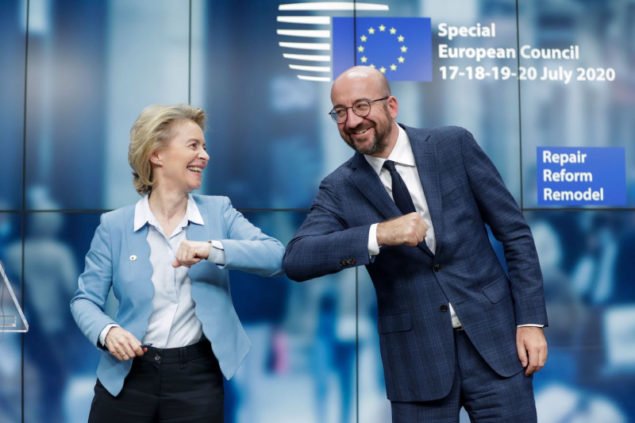 No longer sclerotic, Europe’s economy is bouncing back much faster than the United States’.

COVID-19 is testing plenty of aspects of the conventional wisdoms, including that the United States always bounces back from an economic crisis faster than old Europe. From the oil shock-induced stagnation in the 1970s, to the blasting of the dot-com bubble at the turn of the new millennium, to the 2008-2009 financial crisis, that axiom has always been true. But this time may be different.

After a moment of hesitation early in the pandemic, European countries took decisive action starting in mid-March to contain the virus and set up vast furlough schemes to preserve their economies until reopening could begin. The European Union even decided to take on nearly $890 billion in debt to assist its hardest-hit members. And with European consumption creeping back up, the recovery is underway. In July, EU retail trade volumes were even marginally up year-on-year. And Google data shows that visits to shops and restaurants are now close to pre-pandemic levels.

In the United States, however, massive fiscal spending by Washington has not prevented a chaotic health response from wrecking the economy. Job losses are translating into company foreclosures. And next to income losses, the heft of the second wave of infection has pushed many Americans to keep their consumption low as they adapt their behavior to avoid catching the coronavirus. In fact, U.S. data shows that mobility is still well below baseline.

Rising case numbers in France, Spain, and Greece have sparked fears that the European recovery may be short-lived, with a Europe-wide resurgence of COVID-19 poised to undo its economic progress. But there are three reasons to believe that a U.S.-sized second wave is not truly coming in Europe.

First, a look at the aggregate EU numbers for new COVID-19 cases reveals a sheer difference in scale. EU-wide daily new cases are now in the 45 per million range. That is still below the March and April crests of around 60 per million, and it’s far, far below the approximately 200 per million levels that the United States saw in late July.

Second, the increase is concentrated in a few countries. The situation in Spain is serious: New cases recently exceeded late March peaks and are by far the highest in Europe on a per-capita basis—even higher than in the United States. And the trajectory of the pandemic in Croatia, Greece, Poland, and Romania resembles that of several U.S. states in the South and West. Having been largely spared from the worst of COVID-19 in the spring, these countries reopened too quickly.

But for the rest of Europe, the pandemic still seems under control. In Italy, Germany, the Nordic countries, and most of the Baltics cases have ticked up only slightly despite increased testing. In Belgium, the Netherlands, and Denmark cases did rise over the past few weeks as vacationers returned home at the end of the summer. But in all three countries, the second wave is now already receding as everyone gets back to their desk. There seems to be little community spread. And where there are regional clusters, such as Antwerp in Belgium, partial local lockdowns have been successful. In France, new case numbers have exceeded first-wave levels. But there again, France is lagging slightly, since its holidays ended only in August and the country has embraced a very aggressive testing strategy. France’s test positivity rate is still below the 5 percent threshold set by the World Health Organization (WHO) for the pandemic being under control. And mobility is nearly back to pre-pandemic levels, suggesting that the French are not adapting their behavior.

But third and most important for the recovery, the worst-hit countries are by and large on Europe’s geographic and economic periphery. By contrast, the second wave in the United States hit some of the country’s economic powerhouses. Together, California, Florida, and Texas, the hot spots of the U.S. second wave, account for around 30 percent of national GDP. The share of EU-27 GDP of countries hardest hit by the second wave is less than that, around 20 percent.

Although the U.S. states hit by the second wave largely avoided full-scale closings, the true economic damage came from residents voluntarily changing their behavior to avoid catching the virus. Mobility data shows that visits to retail and recreation spots—the motors of consumption—are still around 12 percent below February levels across the United States—and in California, Florida, and Texas, they are down 22 percent on average over the past week. Worryingly, there is little sign of improvement since early July. The U.S. economy is stuck in first gear.

Sure, Europe won’t have a V-shaped economic recovery. But economically devastating national shutdowns, including widespread border closures, are not in the cards. And most importantly, Europeans feel confident enough to keep spending. In turn, in this crisis, Europe may for once recover quicker than the United States. This should give Europeans a much-needed self-confidence boost on the global stage as they slowly find their own voice in a world dominated by the Chinese-American stand-off. But, perhaps most importantly, this might also be the first crisis that reinforces European citizens’ confidence in the institutions that define them—from the welfare state to the European Union.

Joseph de Weck is a columnist with the Berlin Policy Journal and fellow with the Foreign Policy Research Institute.

Elettra Ardissino is an analyst at Greenmantle, a macroeconomic and geopolitical advisory firm.

European Commission President Ursula Von Der Leyen (L) and European Council President Charles Michel (R) bump elbows at the end of the news conference following a four days European summit at the European Council in Brussels, Belgium, early July 21, 2020. – EU leaders approved a 750-billion-euro package to revive their coronavirus-ravaged economies after a tough 90-hour summit on July 21, along with a trillion-euro budget for the next seven years. (Photo by STEPHANIE LECOCQ / POOL / AFP) (Photo by STEPHANIE LECOCQ/POOL/AFP via Getty Images) 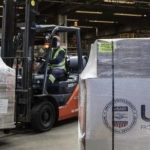 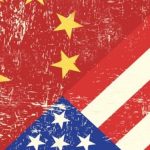 The difference between the U.S. and China’s response to COVID-19 is staggeringChina, COVID-19 Corona virus, John Ross, USA, Vijay Prashad