The Media Myth of ‘Once Prosperous’ and Democratic Venezuela Before Chávez 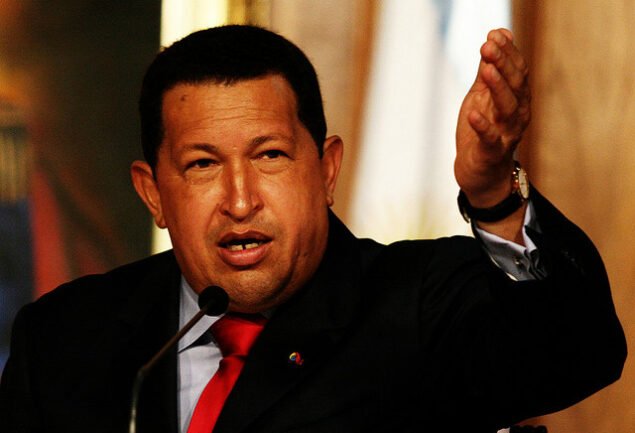 The following piece is adapted from the authors’ new book, Extraordinary Threat: The US Empire, the Media and 20 Years of Coup Attempts in Venezuela.

By Joe Emersberger and Justin Podur 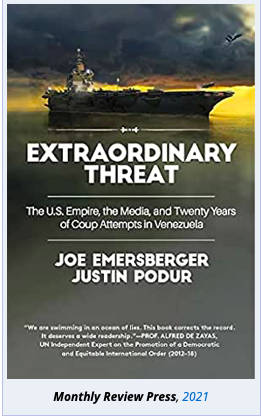 The following piece is adapted from the authors’ new book, Extraordinary Threat: The US Empire, the Media and 20 Years of Coup Attempts in Venezuela, published by Monthly Review Press (click here to see review)

In his State of the Union address on February 6, 2019, Donald Trump said:

We stand with the Venezuelan people in their noble quest for freedom—and we condemn the brutality of the Maduro regime, whose socialist policies have turned that nation from being the wealthiest in South America into a state of abject poverty and despair.

Trump’s ridiculous comment was not considered controversial, because the Western media, including the anti-Trump outlets like the New York Times, have spent many years conveying a lie: that Venezuela had been very prosperous and democratic until Hugo Chávez, and then his successor Nicolás Maduro, came along and ruined everything. If readers believe that, then they may indeed wonder, “Why shouldn’t the US government help Venezuelans return to that prosperous state?”

But this attitude is the result of common deceptions about Venezuela’s economic history, and it ignores how the rise of Chávez actually brought democratic reform, not regression, to Venezuela. The story the Western media tell should instead make people wonder how Chavismo could have become the dominant political force if everything had once been wonderful in Venezuela.

This vague claim about Venezuela’s economic history, in various forms—“once prosperous,” “once the richest”—has become ubiquitous in the Western media. A Nexis search of English-language newspapers for “Venezuela” and “once prosperous” turned up 563 hits between 2015 and 2019.

The “once prosperous” claim cannot refer to Venezuela’s natural wealth: The huge oil and gold reserves are still there. The clear intent of describing Venezuela as “once prosperous” is to suggest that living conditions were “once” those of a rich country.

So by what measure was Venezuela “once” wealthy? When exactly was that? What is the ranking criteria being used to say it was one of the wealthiest? Was it once in the top 10% (by whatever measure)? The top 50%?

It’s always implied that Venezuela’s economic glory days were in the pre-Chávez era, but the financial journalist Jason Mitchell has made this claim explicitly. Writing for the UK Spectator (2/18/17), he said, “Twenty years ago Venezuela was one of the richest countries in the world.” So Venezuela had supposedly enjoyed its wealthy status in 1997, the year before Hugo Chávez was first elected. That’s utter nonsense.

In reality, when Chávez was first elected in 1998, Venezuela had a 50% poverty rate, despite having been a major oil exporter for several decades. It started exporting oil in the 1920s, and it was only in the early 1970s that the biggest Middle Eastern oil producers, Saudi Arabia and Iran, surpassed Venezuela in production. In 1992, the New York Times (2/5/92) reported that “only 57% of Venezuelans are able to afford more than one meal a day.” Does that sound like “one of the richest countries in the world”? Obviously not, but it is worth saying more about the statistics that can be used to mislead people about Venezuela’s economic history.

Economists typically use GDP per capita to assess how rich a country is. It is basically a measure of the average income per person. If journalists cared to be at all precise when they say that Venezuela had once been “rich,” then that’s a statistic they’d cite.

The chart below shows World Bank data for Venezuela’s real (inflation-adjusted) GDP per capita since 1960, and it contradicts Western media’s relentlessly insinuated story that a transition from prosperity to poverty took place because of Chavismo. Real GDP per capita peaked in 1977, near the end of an oil boom, then went into a long-term decline. When Chávez took office in 1999, it was at one of its lowest points in decades. Then it was driven even lower by the first two attempts to oust Chávez: the April 2002 coup and, several months later, a shutdown of the state oil company—the “oil strike.” By 2013, real GDP per capita recovered dramatically, nearly reaching its 1977 peak. 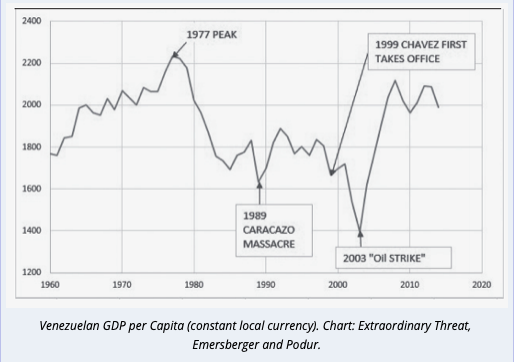 Under Chávez, the poverty rate was cut in half, so there certainly is a correlation between GDP per capita and living conditions in Venezuela. But a country’s GDP per capita, by itself, says nothing about how income is distributed. And that can also make international comparisons very misleading.

Another revealing year is 1989, when the massacre of poor demonstrators later known as the Caracazo took place. In terms of GDP per capita (adjusted for purchasing power parity), Venezuela ranked highest in Central and South America—while its government perpetrated the most infamous slaughter of poor people in its modern history.

The massacre exposed the essentially fraudulent nature of Venezuela’s prosperity and democracy. It explains the rise of Chávez, and also reveals how the US government and media reflexively helped the Venezuelan government that perpetrated the massacre.

From Caracazo to Chavismo 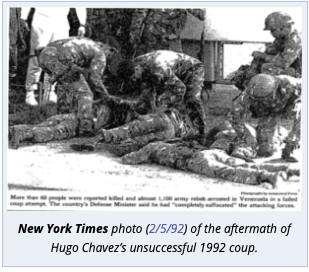 It began on February 27, 1989. Venezuelan security forces killed hundreds, and possibly thousands, of poor people over a five-day period. The poor had risen up in revolt against an IMF-imposed “structural adjustment” program that involved stiff hikes to fuel prices and bus fares. The program was imposed by President Carlos Andres Pérez, a man who had campaigned saying that IMF programs were like a “neutron bomb that killed people but left buildings standing.”

US President George H. W. Bush called Pérez on March 3, 1989, while the Caracazo massacre was still taking place, to commiserate with Pérez and offer Venezuela loans. The US media’s Venezuela narrative suited Bush’s foreign policy. A New York Times article (11/11/90) about Venezuela by Clifford Krauss described Pérez as “a charismatic social democrat.” Not a word was written about the Caracazo massacre. The article focused on Bush’s gratitude toward Pérez for, among other things, boosting Venezuela’s oil output to help protect the United States from negative economic consequences after the Iraqi invasion of Kuwait.

On February 5, 1992, Lieutenant Colonel Hugo Chávez first became widely known to Venezuelans by attempting a military coup. The day Chávez’s coup failed, a news article in the New York Times (2/5/92) referred to Venezuela as “one of Latin America’s relatively stable democratic governments,” and to Pérez himself as “a leading democrat,” despite the Caracazo massacre only three years earlier, which is never mentioned. The Times also quoted then–President Bush calling Pérez “one of the great democratic leaders of our hemisphere.”

When Chávez first took office after elections in 1999, the US government did not go immediately on the attack. When you consider the flashy anti-IMF campaign rhetoric of Carlos Andres Pérez—the president who then massacred people to implement an IMF austerity plan—it’s unsurprising that the US would feel Chávez out for a while. Maybe Chávez would be similarly phony—and therefore worthy of US support.

By 2001, the US government realized that Chávez was not going to be like Pérez, who made a sick joke of his anti-IMF rhetoric once he was in office. Chávez was actually going to try to follow through on his promises to change the system and assert his country’s sovereignty. Chávez aggressively opposed the US invasion of Afghanistan, and even said that the US ambassador came calling and disrespectfully asked him to reverse his position. That provoked Chávez to order the ambassador out of the room. This was a key event in the souring of Venezuela/US relations (Bart Jones, Hugo!, Steerforth Press, 2007, p. 297). 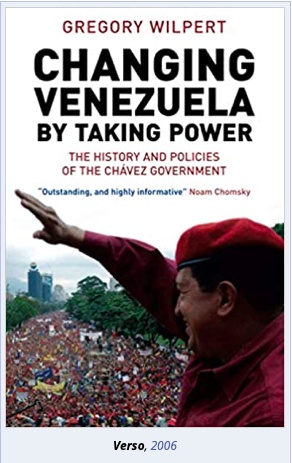 When Chávez first took office, he enjoyed approval ratings of 90%, which would suggest that racism and classism for eventual middle-class opposition to Chávez could not be an important factor.

Venezuela’s middle class had been sliding into poverty for two decades and supported Chávez in 1998 because they were desperate for change.

But soon enough, the old political elite, like the US ambassador, deeply resented Chávez asserting his authority. They had expected Chávez’s deference. His African and Indigenous roots, and his working-class origin, could be overlooked, until he shunned the usual power brokers when making his cabinet appointments.

The conflict intensified when a constituent assembly, elected by voters, drafted a new constitution which was then approved in a referendum. Transitional authorities were appointed under the new democratic order. As Wilpert described it (Changing Venezuela, p. 20):

The old elite then used its control of the country’s mass media to turn the middle class against Chávez, creating a campaign that took advantage of the latent racism and classism in Venezuelan culture.

By 2004, predictably, Chávez relied much more heavily on the support of poor people to win elections (Changing Venezuela, p. 268–269).

In the first year he took office, Chávez initiated a three-step process to give Venezuela a new constitution. In April 1999, he went to voters asking if they wanted to initiate the process by electing a constitutional assembly, and if they approved of the rules specifying how the assembly would be elected. His side won that referendum with 92% of the vote on the first question, and with 86% on the second (which specified basic electoral rules) (Changing Venezuela, p. 21).

Elections were held in July to choose the members of the assembly. Chávez supporters won 125 of the assembly’s 131 seats. The assembly then drafted a constitution and, four months later, it was approved by 72% of voters in another referendum.

In July 2000, Chávez went to voters again for a fresh presidential mandate under the new constitution and prevailed easily with 59.8% of the vote. But these were “mega-elections,” as Wilpert (Changing Venezuela, p. 22) put it, ones that “eliminated the country’s old political elite almost entirely from the upper reaches of Venezuela’s public institutions”:

Thirty-three thousand candidates ran for over 6,000 offices that day. In the end, Chávez was reconfirmed in office with 59.8% of the vote. Chávez’s supporters won 104 out of 165 National Assembly seats and 17 out of 23 state governorships. On the local level, Chávez candidates were less successful, winning only about half of the municipal mayors’ posts.

They should be very wary of the methods Mr. Chávez is using. He is drawing power into his own hands, and misusing a special constitutional assembly meeting now in Caracas that is composed almost entirely of his supporters.

Mr. Chávez, a former paratroop commander who staged an unsuccessful military coup in 1992, has so far shown little respect for the compromises necessary in a democracy, which Venezuela has had for 40 years.

Clearly, any genuine reform process in Latin America was going to be vilified by liberal outlets like the New York Times.

The lies peddled about Venezuela’s past make US aggression against it possible in the present. It is worth summing up some of these key lies:

Justin Podur is Associate Professor at the Faculty of Environmental and Urban Change at York University. He is the author of Haiti’s New Dictatorship, Siegebreakers, and America’s Wars on Democracy in Rwanda and the DR Congo.

Joe Emersberger is an engineer, writer, and activist based in Canada. His writing, focused on the Western media’s coverage of the Americas, can be found on FAIR.org, CounterPunch.org, TheCanary.co, Telesur English, and ZComm.org.