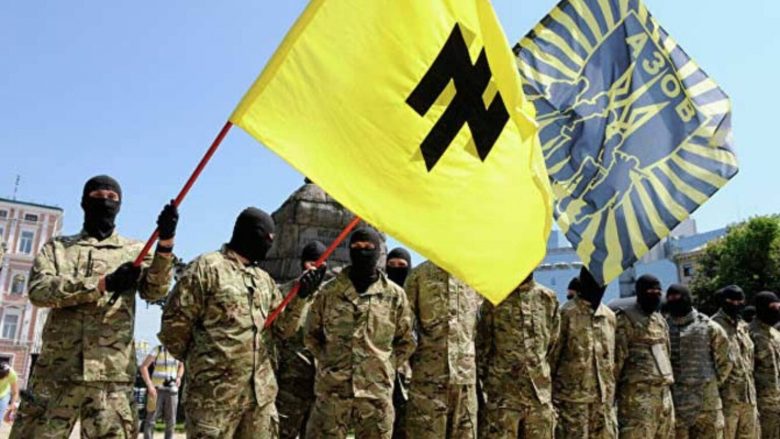 In an effort to understand the events in Ukraine, Steven Sahiounie interviewed Shahzada Rahim, a geopolitical analyst based in Islamabad with specialization in Eurasian politics, Middle East and Russian Foreign Policy. He is the founder and CEO of think tank and news website the Eurasian Post.

In an effort to understand the events in Ukraine, Steven Sahiounie of MidEastDiscourse interviewed Shahzada Rahim, a geopolitical analyst based in Islamabad with specialization in Eurasian politics, Middle East and Russian Foreign Policy. He is the founder and CEO of think tank and news website the Eurasian Post. He is a close confidante of the former special representative to Kremlin, Professor Alexander Dugin.

#1.  Steven Sahiounie (SS):  The Azov battalion is one of the Nazi groups in Ukraine, and has been integrated into the national army. How are these Nazis perceived by the Ukrainian population?

Shahzada Rahim (SR):  In order to understand the roots o Neo-Nazis in Ukraine; we must go back to Euro-Maidan uprising that erupted in 2014. The Maidan uprising was a western backed colour revolution that overthrew the Pro-Russian regime of Viktor Yanukovych. It was this particular period the CIA backed Azov Battalion emerged out of no where. Since then Russians have been warning the western nations about the neo-Nazi plague in Ukraine. It was on the American dictation, the pro-American regime of Petro Oleksiyovych Poroshenko, who integrated the neo-Nazi battalions such as Azov into the Ukrainian Army. The west has been silent over the Azov Battalion open display of the neo-Nazi symbols on their flags. Since 2015, the neo-Nazi Azov Battalion has been carrying out the genocide of the Russian speaking population in the Donbass region, and Russia had warned their western backers to stop the genocide of Russian population in the Donbass region.

The west has ignored the sharp warning of the Russian Federation and refrained to highlight the barbaric genocide carrying out by Neo-Nazi brigade in the eastern Ukraine. On the contrary, if we analyse the existence of Azov Battalion, the majority of the Ukrainian population was kept in shadows about the existence of such brigades by the Western puppet regime of Petro Poroshenko and his successor Vladimir Zelensky.  I believe that majority of the Ukrainian population does not support the neo-Nazi Azov Battalion except the narrow pro-western political elites in the country.

#2. (SS):  Turkey and Russia have security agreements in Syria, and have domestic trade ties.  However, Turkey continues to sell military drones to Ukraine, and has exerted control over the waters.  How will this affect relations, and will Russia retaliate?

SR:   I agree the ongoing conflict in Ukraine has created a slight rift between Russia and Turkey. But, the fact cannot be denied that Turkey will never jeopardise its strategic relations with Russia because Turkey needs Russia to balance its regional status in the Eurasian region (which we have seen in Syria). However, if we take into account the Post- Davutoğlu foreign policy approach of Turkey at the international stage then there is a strategic shift. The current nature of Turkish foreign policy is more based on “bouncing and balancing” strategy. For instance, two days ago; Turkey joined the Western condemnation of Russian conflict in Ukraine by voting against Russia at the United Nations. At the same, Turkish government offered to be a mediator to resolve the conflict in Ukraine. This clearly demonstrates that Turkey does not want to jeopardise its relations with Russia.  I believe that as a member of NATO bloc; Turkey is obliged to condemn Russia because it was the NATO’s eastward expansion which fomented the ongoing conflict. However, so far President Erdogan has pursued a balancing approach towards Ukraine. Because, Erdogan is an experienced diplomat cum politician, who knows that who will be the victor of the conflict? Which is obviously Russia.

Regarding the Turkish military support; I would say that the sole purpose of providing Turkish-made drones was to advertise its product and to evaluate its precision in the conflict. Turkey knows its strategic limitation because it cannot afford the conflict against Russia in Ukraine. Hence, I believe that Turkey will refrain from direct confrontation with Russia in Ukraine. Russia will only retaliate if Turkey attempts to abandon its balancing foreign policy approach on the Ukrainian conflict.

#3. SS:  Ukrainian President Zelensky continues to request a ‘No Fly Zone’, even though the US, EU and NATO officials have said no, and it would require a full war between the West and Russia.  Why does he keep asking?  Is he hoping they will change their minds, or is he hoping to convince the Western citizens and gain their support for a full war?

SR:  Zelensky might be a popular politician among the Ukrainians, but to be honest he does not understand the dynamics of geopolitics. His prolonging of the conflict in Ukraine by using innocent civilians clearly demonstrates his political idleness. He knows that his western backers have stopped supporting him because they understand the consequences of direct involvement in war against Russia in Ukraine.

To be precise, it is the western corporate media, which is attempting to made him as “Hero” just like “Bush” and “Blair”, who slaughtered tens of thousands of innocent civilians during the invasion of Iraq. The west mainstream media has lost its standard of information dissemination. Especially on Ukraine, the western media is exposed as being the “corporate puppet”.

By using the western corporate media, Zelensky is attempting to pressure its western backers to impose the “NO FLY ZONE”, which I believe that would be an eventual suicide. The western nations especially the NATO key members understand the drastic consequences of “NO FLY ZONE” in Ukraine. President Putin has already put its nuclear forces on high alert, which has sent a sharp warning to western nations not to breach the Russia’s red line. In my opinion, by repeatedly asking for the “NO FLY ZONE” in Ukraine, President Zelensky attempts to show himself as the political victim of his western backers. But, in a broader geopolitical domain, NATO members will not even think about this suicidal mistake.

#4.  SS:  Ukraine began asking to join NATO in 2014.  NATO has requirements and has said they will not admit Ukraine for many years. Has the US, EU and NATO caused this conflict by insisting that Ukraine will one day be part of NATO?

SR:  To briefly answer your questions let me recall President Putin’s warning to NATO in his 2007 Munich Security Conference address, in which he clearly mentioned Russia’s gross security concerns over the NATO’s eastward expansion. In his speech, President Putin sent a clear message that Russia will not tolerate the presence NATO on its western borders. Even the sensitivity of Russia’s western border was also speculated by geopolitical expert Tim Marshall in the opening pages of his book, “The Prisoners of Geography”. Tim Marshall writes, “Ukraine is strategic when it comes to Russia’s geopolitical interests and Russia will never tolerate the existence of NATO in Ukraine.”

To answer your question on logical grounds, I would say that the real perpetrator of this conflict is the United States and its NATO allies, which ignored the repeated warning of Russia about the importance of Ukraine for its geopolitical security.

On the contrary, if we look deeper into this issue I believe that NATO had its eyes on Sevastopol Crimea which they lost when Crimea re-joined Russia in 2014 through a popular referendum. Since then the West lost its interest in the remaining Ukraine, but due to geopolitical cause they began supporting and funding the Neo-Nazi brigades to fight Russia in the eastern Ukraine. To be honest, it is the United States and its NATO allies to be blamed for the ongoing conflict in Ukraine instead of Russia.  Russia has not invaded Ukraine as it has been portrayed by the western corporate media. It is a “Special Operation” to de-Nazify Ukraine, which I believe is necessary to ensure Russian security and protect Russian speaking population in the Eastern Ukraine.

It is clear that since 2016, Russia has been urging the Ukrainian regime to declare “Neutrality”, which they intentionally rejected. In general, the Ukrainian pro-western regime and their backers who must be blamed for the ongoing bloody conflict in the country.

#5. SS:  Some analysts have suggested that Ukraine could declare neutrality, as did Austria during the ‘Cold War’.  This could stop the conflict, but would President Zelensky agree to it?

SR:  If the west is serious about ending the conflict in Ukraine, then “Ukrainian neutrality” can be an option. But, before declaring neutrality, Ukraine must assist Russia in the de-Nazification of the Ukrainian military. Because the primary focus of the Russia’s special operation in Ukraine is to de-militarize the Neo-Nazi brigades in Ukraine. Hence, it is the denazification of the Ukrainian military that can only pave the way for the “Neutrality” of Ukraine.

Nonetheless, the west must understand the serious security concerns of Russia over neo-Nazi elements in Ukraine, especially in its military. Perhaps the Ukrainian political elites too. Neutrality is only possible if the Ukrainian government became serious about the Russia’s fight against the CIA funded neo-Nazi brigades such as Azov in Ukraine.

I believe that only the de-Nazification of the Ukrainian military will stop the ongoing conflict and President Zelensky must understand this before it is too late.

#6. SS:   President Zelensky has asked for foreign fighters in Ukraine.  The Al Qaeda affiliate in Idlib, Syria has been sending terrorists to Ukraine by land through Turkey.  Isn’t the EU afraid of these Radical Islamic terrorists later going to Europe, as the Ukrainian refugees have?

SR:  If the foreign fighters take ground in Ukraine, then Europe must get ready for the grave consequences in the coming years. The European liberal and corporate elites must understand the enduring threats posed by the terror groups such as Al Qaeda to the broader Eurasian and European security.  I condemn Zelensky’s decision to invite the most wanted terrorists to fight Russian forces in Ukraine, which will haunt the Ukrainian people for the decades to come.

Apart from this, Ukraine has been the home to largest black weapons market in the world. If the western supplied latest weapons fell in the hands of these terror groups, then it will bring huge threats to the European security in the future.  Zelensky, out of emotional anger is playing with fire, which will fire back at Ukraine in the future.  The western liberal elites must pay attention to this strategic blunder of President Zelensky made on emergency grounds.