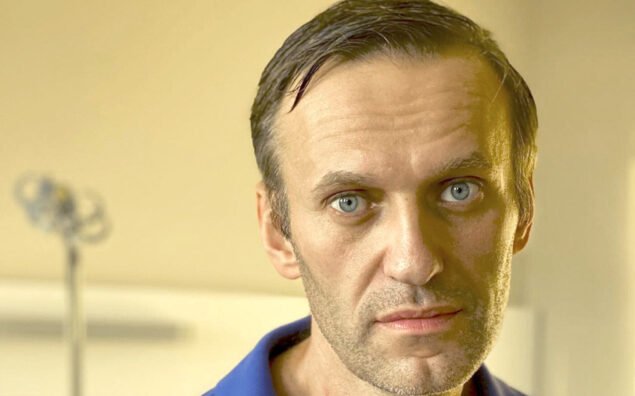 Alexei Navalny crashes out: What happened when he wasn’t on Lithium and Benzodiazepines…

The last unanswered question about Alexei Navalny was answered this week in a Moscow courtroom by Navalny himself. For the first time he didn’t have production back-up from his MI6 helper, Maria Pevchikh of London,  or his CIA and BND teams in the Black Forest of Baden-Württemberg. 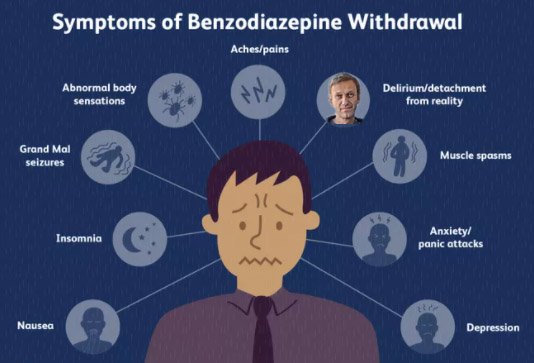 The question is a medico-psychiatric one.  It was first made public by Navalny’s treating doctors at the Charité clinic in Berlin. These doctors, it was, who revealed that Navalny was a heavy user of lithium and benzodiazepine drugs. They published this in a set of four data tables they attached as appendices to their case report on Navalny. Their data raised the question — what would happen if Navalny was forced to withdraw from his drugs quickly.

After eighteen days in remand prison in Moscow, Navalny answered this question himself in the Babushkinsky district court on February 5.

The disclosure that in his Tomsk hotel on August 19, hours before he collapsed and the Anglo-German OPERATION NOVI-NOVICHOK commenced, Navalny had taken a large dose of lithium, diazepam, nordazepam, oxazepam, and temazepam, was first published on December 22 in The Lancet. Read the report and the analysis here.

The medico-psychiatric literature is clear on what happens to a habitual user of these drugs if rapid withdrawal is attempted:  for lithium, read this;  for the benzodiazepines, click to open.

RIA Novosti, a state news agency, has published this report by Irina Alksnis, of what Navalny said and did in court last Friday. Since then, on Monday, Navalny’s staff  announced they have suspended their  demonstration plans until the spring.  The next day they were overruled and announced a smartphone flashlight and drone show for next weekend.   For Navalny, though, the light is going out – and his Berlin doctors have revealed why.

In the courtroom report to follow in English translation, the direct quotes have not been reported in any newspaper or broadcaster in the west. Alksnis reported what she saw and heard. She appears not to have read Navalny’s German medical reports.

NAVALNY DESTROYED HIMSELF AS A POLITICIAN IN ONE DAY

“In Russian politics, a rare non-trivial event has occurred. It rarely happens when a famous person publicly and in real time destroys himself as a public figure, and does it with fierce enthusiasm.

It was this process that could be observed today in the performance of Alexei Navalny, against  whom the Babushkinsky court of Moscow began to consider a libel case.

It is worth recalling that in June last year, RT TV channel released a video about the vote on  amendments to the Constitution. The blogger posted a video on his Twitter, calling its participants, among whom were both popular stars in Russia and citizens unknown to the general public, ‘corrupt lackeys’, ‘a disgrace to the country’, ‘people without a conscience’, and ‘traitors’. 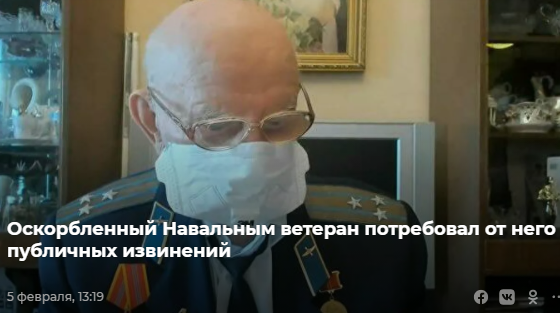 Ignat Artemenko -- “the veteran offended by Navalny demanded a public apology from him.”

And it would be all right — after all, even minimal participation in politics requires a very thick skin and the ability to ignore insulting statements against you.  It is often easier to ignore boorish attacks than to deal with the offender, thereby providing him with additional PR. But among the heroes of the video was the 95-year-old participant of the Great Patriotic War,  Ignat Artemenko, who, for obvious reasons, took Navalny’s words to heart — and then went to bed.

As a result, the Investigative Committee opened a criminal case on ‘deliberately false information defaming the honour and dignity of the veteran’, and Artemenko was identified as the victim.

From the point of view,  not of  law, but of political technology,  this whole situation was not worth a damn for Alexei Navalny. In the biography of almost any public person, especially a politician, there are ‘blunders’ — scandalous statements which cause a negative reaction from the public. Sometimes this happens because of a bad choice of words or of a combination of circumstances; sometimes in the heat of an emotional explosion; sometimes out of stupidity. Be that as it may, smoothing out such a scandal is a matter of utterly simple technique: you need to apologise as quickly as possible, express remorse with  all seeming sincerity, and promise not to make such mistakes in the future. That’s all.

However, the blogger did not manage to work out the blunder quickly. But today, during a court hearing, it turned out that the 95-year-old veteran himself only wants a public apology from him.

Then something inexplicable commenced from the point of view of both professional political operation and banal common sense.

In the following hours, Alexei Navalny repeatedly called Ignat Artemenko a ‘doll’ who ‘does not understand anything’ and who is ‘traded’ by his family. He said that ‘his relatives will strangle him tonight.’ And when the veteran’s grandson asked the blogger to ‘remain a man’ during the testimony, Navalny’s response included shouting that ‘the only problem with your grandfather is that he raised a grandson who is a prostitute.’

For the elderly man who participated in the trial remotely from home, all this turned out to be too much, and he had to call an ambulance.

Against this background, Navalny’s constant shift into shouting, rolling into hysterics,  bickering with the court, and insulting other participants in the process look like trifles. Although at some point, the judge, unable to stand the circus, gave five minutes to the lawyers to ‘bring the defendant to his senses’, since ‘there is no longer any possibility to tolerate this’.

The defendant’s behaviour shocked even the distinctly ‘pro-carnival’ media, many of which were forced to replace the direct speech of their leader online with the phrases ‘shouting at each other’ or ‘a skirmish begins’.

The public interested in politics is currently excitedly discussing the possible reasons for this frankly inadequate show — raising questions about the mental health and behaviour of the man who is called ‘the main Russian opposition leader’. However, this is no longer so important.

The main result of today was the public elimination of Alexei Navalny himself as a socio-political figure, as well as dealing a fatal blow to his own organisation and to the Russian anti-state opposition in general.

After the ‘performance’, the blogger loses the remnants of his already small public support. No, of course, someone — quite radically frostbitten — will still remain. But by doing so, they will spread to themselves something monstrous in its immorality and inhumanity, which looked out today from under the usual cosmetically perfect mask of the opposition — and from which everyone else recoiled in horror.”

NOTE ON THE RUSSIAN AUDIENCE:  two weeks after the first internet broadcast of Navalny’s Black Forest film, “Putin’s Palace”, the Levada Centre of Moscow interviewed a nationwide sample of Russians in their own homes, and polled their interpretations of what they had heard or seen,  including their post-film attitudes towards official corruption in Russia and President Vladimir Putin. The full Levada poll report, issued on February 8, can be read here.

The concentration of Navalny’s audience among young social media users -- analysed here  -- has been corroborated. Levada did not report the income and social class backgrounds of this pro-Navalny minority. The poll report confirms that the film reinforced disapproval of Putin in this group but had no impact on the majority of older Russians. Navalny’s political failure in the film can be seen in this chart:

The available data suggest that if the claim of more than 105 million views has not been fabricated,  only one in five of that audience was Russian; of them, half clicked to view for less than two minutes; just 3.4 million (16% of the Russian audience) watched the film through to the end. According to the Latvia-based pro-Navalny medium Meduza, the  Mediascope company measured the Russian audience for the film at 21.2 million over 12 years old (17% of the country's population). At the same time, 11.6 million people watched more than two minutes of the film; 3.4 million watched it to the end. About 60% of this audience was concentrated in large cities. There has been no report from Levada, Mediascope and Meduza on how many Russians watching the film to its conclusion were on benzodiazepine drugs at the time.