A Chinese cartoonist’s political satire, which mocked the Group of Seven (G7) members that attempt to suppress China, went viral on Chinese social media on Sunday, when the G7 summit was underway in Cornwall, the UK.

A Chinese cartoonist’s political satire, which mocked the Group of Seven (G7) members that attempt to suppress China, went viral on Chinese social media on Sunday, when the G7 summit was underway in Cornwall, the UK. 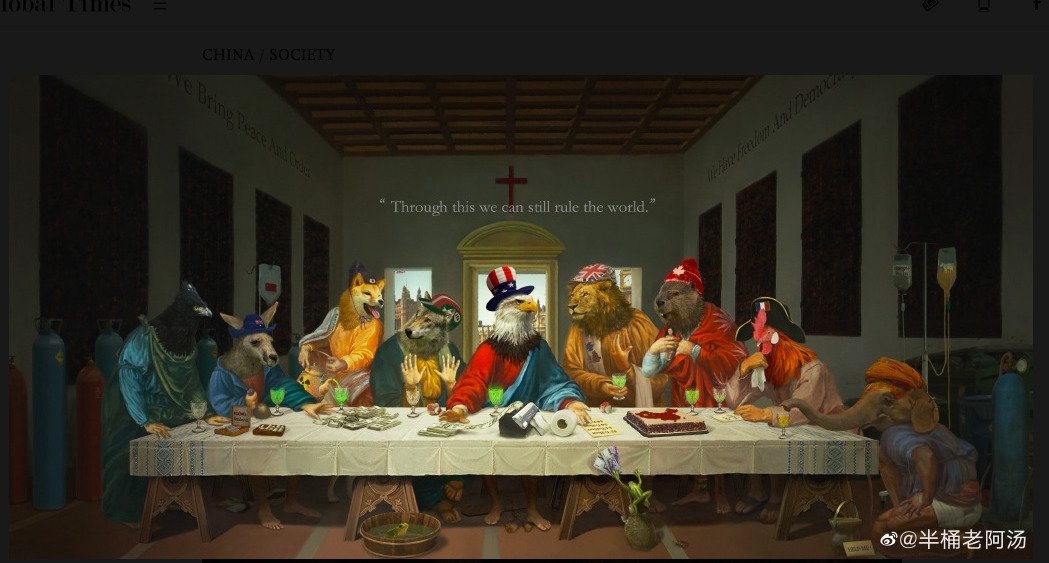 Titled The Last G7, the illustration, published by its author “Bantonglaoatang” on Sina Weibo on Saturday, was painted based on the renowned religious mural The Last Supper. This G7 summit is widely seen as an attempt by the US to rally allies against China.

Similar to the final meal Jesus shared with his apostles before his crucifixion that The Last Supper depicted, Bantonglaoatang painted a vivid picture of nine animals – respectively representing the US, the UK, Italy, Canada, Japan, Germany, France, Australia and India – sitting around a table with a Chinese-map-shaped cake on it. On top of the painting is the words in quote: Through this we can still rule the world.

These animals have different facial expressions and gestures, implying that each side of the G7 actually has its own axe to grind on the common conspiracies of suppressing China and upholding the Western hegemony, analyzed some observers and Chinese netizens.

Wearing a bowler hat with an American flag on it, a bald eagle sits in the middle like Jesus in The Last Supper, obviously the convenor of the meal. In front of the bald eagle there is a small banknote printing machine and a bill on the table. The machine is printing toilet paper into dollars, and the number on the bill gets bigger and bigger – from $2 trillion to $8 trillion.

There is also an iron hook under its feet, and two pieces of cotton with blood near its hands on the table, suggesting “the US’ capital accumulation was built on racial oppression,” a vlogger nicknamed “sharp-tongued pumpkin” said in his latest video analyzing the illustration, which has gained over 700,000 views on video streaming platform Bilibili within a day after he uploaded it on Saturday afternoon.

The bald eagle image shows today’s aggressive yet feeble US is trapped in its growing debt crisis and racial conflicts, but still points fingers at China, “sharp-tongued pumpkin” pointed out.

Sitting on the left of the bald eagle is a grey wolf, wearing a cap with an Italian flag on it. The wolf waves its hands as the apostle Andrew in The Last Supper, as if saying “No” to the US’ suggestions of jointly cracking down on China. The grey wolf image shows Italy, the first European country that joined China’s Belt and Road Initiative (BRI), is reluctant to collaborate with the US in suppressing China, commented “sharp-tongued pumpkin.”

Next to the wolf is an Akita dog that represents Japan. Without a seat, it is busy serving the others a “drink” – pouring green radioactive water into the glasses of the other animals. On Weibo some users said the green water is the contaminated water that Japan plans to release to the Pacific from the destroyed Fukushima nuclear plant.

Sitting next to the dog is a kangaroo, which is stretching its left hand to the banknotes that the US is printing, while grasping a bag in its right hand. The kangaroo symbolizes the double-faced Australia which actively cooperates with the US in containing China, but is also eager to earn money from China, its largest trading partner, according to “sharp-tongued pumpkin.”

On the left corner stands a black hawk, which obviously represents Germany as its pose is almost the same as that of the German Chancellor Angela Merkel in a widespread photo in the G7 summit in 2018. Germany, similar to the rooster (representing France) sitting in silence on the right side, seems more interested in its own European issues and shows less enthusiasm on the US’ propaganda, netizens found.

On the right side of the table also sits a lion and a nutria, respectively representing the UK and Canada, both the US’ close Five Eyes allies. The nutria, wearing a red coat with images of marijuana on it, holds a doll in its hand. Many netizens believe the doll represents Huawei’s chief financial officer Meng Wanzhou, who is still unreasonably detained in Canada.

On the right corner of the table sits an elephant (representing India) that is on a drip like a patient.

Under the table there is a frog holding banknotes in its hands, trying to jump as high as possible to reach the table and give the money to the US. The little frog symbolizes the separatist authority from the island of Taiwan, which is always subservient to the US, some netizens pointed out.

The illustration caused a stir on Weibo on Sunday, with numerous users praising the author for vividly and straightforwardly revealing the evil intentions of the West that tries to lay a siege to China. “But this is perhaps their ‘last supper,’’’ one user mocked. “With different positions, for various interests of their own, these countries and regions can’t form a real league against China.”