The just-world fallacy: why people bash Assange and defend power 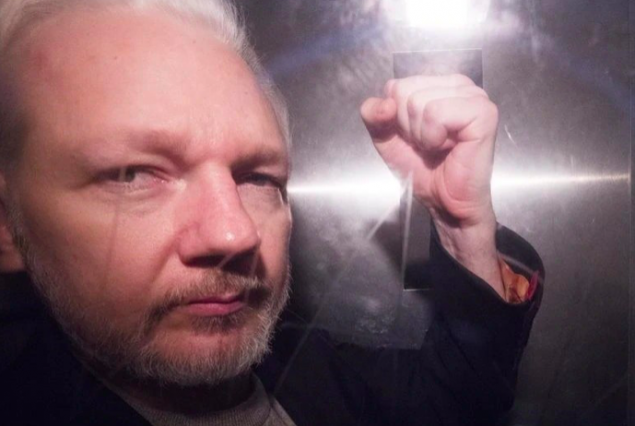 If you don’t cultivate a healthy respect for just how advanced modern propaganda has become, you won’t be able to understand what the propagandists are doing when observing the behaviors of the political/media class, and you’ll almost certainly wind up being fooled by the propaganda machine in various ways yourself.

I write a lot about how important it is for political dissidents to research and understand cognitive biases, the large number of well-documented logical glitchesin the way human brains process information. I do this because the science of modern propaganda has been in research and development for more than a century, so if public domain psychology is aware of these glitches we can be absolutely certain that the propagandists are as well, and that they are exploiting those glitches currently.

If you don’t cultivate a healthy respect for just how advanced modern propaganda has become, you won’t be able to understand what the propagandists are doing when observing the behaviors of the political/media class, and you’ll almost certainly wind up being fooled by the propaganda machine in various ways yourself.

The fact that people think of themselves as rational creatures, but in reality have many large cognitive vulnerabilities which can and will be exploited to cause them to interpret data in an irrational way, is not some amusing-yet-inconsequential bit of trivia. It’s an absolutely crucial piece of the puzzle in understanding why the world is as messed up as it is, and in figuring out how to fix it. The immense political consequences of this reality extend into every facet of civilization.

For example, have you ever wondered why ordinary people you know in real life often harbor highly negative opinions about Julian Assange, seemingly to no benefit for themselves, even while he’s being viciously persecuted for his truthful publications by some of the most corrupt political forces on the planet? You’ve probably correctly concluded that it’s because they’re propagandized, but have you ever wondered why that propaganda works? Even on some of the more intelligent people you know?

The reason is partly because of a glitch in human cognition known as the just world hypothesis or just world fallacy, which causes us to assume that if bad things are happening to someone, it’s because that person deserves it. Blaming the victim is more psychologically comfortable than seeing that we live in an unjust world where we could very easily become victim ourselves someday, and we select for that comfort over rational analysis.

In the early 1960s a social psychologist named Melvin Lerner discovered that test subjects had a curious tendency to assign blame for an unfortunate event to the victims–even when said event couldn’t logically have been their fault–and to assign positive attributes to people who received good fortune–even if their fortune was due solely to random chance. Lerner theorized that people have an unconscious need to organize their perceptions under the fallacious premise that the world is basically just, where good things tend to happen to good people and bad things tend to happen to bad people. Nothing in a rational analysis of our world tells us that this assumption is in any way true, but tests by Lerner and subsequent social psychologists have backed up his theory that most of us tend to interpret events through the lens of this irrational assumption anyway.

When news first broke in November of last year that the Trump Justice Department was preparing to charge Julian Assange for 2010 publications by WikiLeaks, establishment Democrats suddenly began babbling about “karma”. These people weren’t Buddhists or Hindus, yet when the Trump administration (who they claim to oppose) began an aggressive assault on the free press (which they claim to support), they began reaching for eastern philosophical concepts which have no evidentiary basis whatsoever in order to justify it. Their irrational belief in a just world was psychologically more comfortable than going against their confirmation bias about the guy who spilled dirt on Queen Hillary, so they selected it. Not because it was more truthful, but because it was more comfortable.

You see this more and more often as facts in evidence make it abundantly clear that the Trump administration’s persecution of Assange pose the greatest threat to the free press in modern history, both among the rank-and-file citizenry and among the political/media class. Countless opinion segments and articles have flooded the mainstream media denying that Assange’s persecution poses a threat to press freedoms, on the basis that Assange is different from the mainstream press in some way.

This isn’t due solely to the fact that these establishment lackeys know they’ll never publish anything which inconveniences power like Assange did (many mainstream journalists sincerely believe that they hold power to account in some way); a lot of it is due to the fact that it’s much more psychologically comfortable to believe that Assange is being savagely persecuted because he deserves it. Believing that Assange is getting what’s coming to him is just plain more psychologically comfortable than believing you’re in an endlessly out-of-control world where bad things happen to good people, and that in fact you live in a world where your own government will torture and imprison a journalist for publishing embarrassing facts about it. And it’s certainly a lot more comfortable than believing you could be next.

The just world fallacy explains so much about what’s going on today. It explains why everyone scrambles to defend their government when it begins victimizing a sovereign nation for refusing to comply with the demands of the powerful. It explains why people have been so easily propagandized into believing that poverty is caused by the laziness of the poor rather than the exploitation of the rich. It explains why people are so quick to justify the censorship of a perceived political enemy on the internet. It explains why any time video footage of a controversial  police shooting goes viral, the comments are always flooded with people saying the victim should have known better than to get down on the ground so slowly or reach for his wallet so quickly. It explains why attempts to discuss rape culture are so often bogged down by moronic comments about how its victims should behave. It explains why people justify mass government surveillance claiming that if you’ve got nothing to hide, you’ve got nothing to worry about. Some of these issues are more obvious to those on the left of the partisan divide, and some of them are more obvious to those on the right, but the impulse to create a false sense of safety in yourself is the exact same in all examples.

Even those who are wide awake to what’s going on in the world and don’t fall for any of the victim-blaming dynamics described above still often fall for a victim-blaming illusion of their own: the impulse to blame the propagandized masses for being propagandized, instead of blaming the propagandists. This one is just as deluded as any of the others, and it works for the same reason: it’s just plain more psychologically comfortable to believe that someone is being victimized by the system because of some flaw in the victim.

If we had a just and fair world, creating propaganda would be illegal along with murder, theft, fraud, and every other infraction on an individual’s personal sovereignty. To be clear, I don’t think that trying to make it illegal would work. I believe we need to evolve beyond the manipulations so they no longer affect us, but that requires us to see it as the serious offense that it is. If in the future we are to evolve to see it clearly, propaganda will elicit an instant and aggressive backlash from the collective against the propagandist. But right now it doesn’t, and it’s protected in part by people who believe that the crime of manipulation is outweighed by the crime of being trusting. Deliberately manipulating people for money, power or both is an attack on people’s psychological sovereignty, and until we see it as such then we will never turn our anger where it’s meant to go: on the perpetrators. If we can’t eradicate propaganda then we will never be able to see and understand what’s going on in the world clearly enough to fix it.

In reality, we live in a very unjust world. We live in a world where money is the only real valuing system, and money selects for ruthlessness. Money elevates those who will do what it takes to get ahead, and so money elevates sociopaths. No amount of muddle-headed magical thinking about “karma” is going to make that untrue. There is no grand arbiter in the sky selecting for goodness and badness. Wemust select good and badness. People must be held to account for their actions by those that observe that those actions are unjust. Great things happen to bad people, and awful things happen to good people, and when culture elevates greed and sociopathy that is only going to get more true until we put an end to it.

It is psychologically comfortable to believe that we live in a just world. It is much less psychologically comfortable to understand that we don’t, and that we never will unless we fight very hard for it. One is an illusion, the other is reality. A preference for reality over comfort is the primary factor which separates those who serve corrupt power from those who speak out against it.