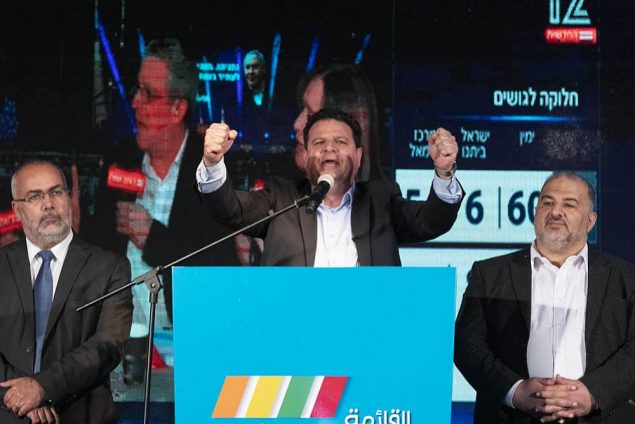 Joint List Chairman Ayman Odeh addresses supporters at the party headquarters in the northern city of Shefa-‘Amr on the night of Israeli elections, March 2, 2020. (Oren Ziv)

The Joint List may not save this place, but it showed that it is the only real alternative to the racism and incitement of the Israeli right.

We did not wake up to a new Israel on Tuesday morning, following the third election of the past year. Every Palestinian citizen of Israel knows the moral ground upon which Israel was founded. We all know the heavy pricePalestinians have paid for the historic crimes committed by others against the Jewish people.

From its inception until today, Israel has not ceased in meting out harm to its Palestinian citizens. It has oppressed them, dispossessed them of their land and their rights, attempted to erase their identity, and passed racist laws against them. Arab society is undergoing a process of reconciliation between its Palestinian identity and its Israeli citizenship. And as that process has taken shape, the attacks from the Israeli establishment have only intensified.

Every time it seems we’ve reached a new low, Israel’s extreme-right government surprises us with new forms of incitement, discrimination, and erasure, while simultaneously dragging Israel’s Jewish public to normalize racism. The results of Monday’s elections, in which Netanyahu’s right-wing bloc will likely end up with 58 Knesset seats, reflected just how widespread racism has become in Jewish-Israeli society. It is yet another step toward undoing whatever democracy is left here.

But from under the rubble left behind by the Zionist movement has risen a new Palestinian people. Victims of Zionist colonialism, represented by the four Arab slates, and with the help of a few Jewish partners, formed the Joint List.

The latest elections revealed just how deeply hatred runs in Israeli society. Everyone is now against everyone. The ethnic slurs, Ashkenazi elitism, and delegitimization of various minority groups have left the Joint List as the last bastion fighting for basic democratic rights in this country. 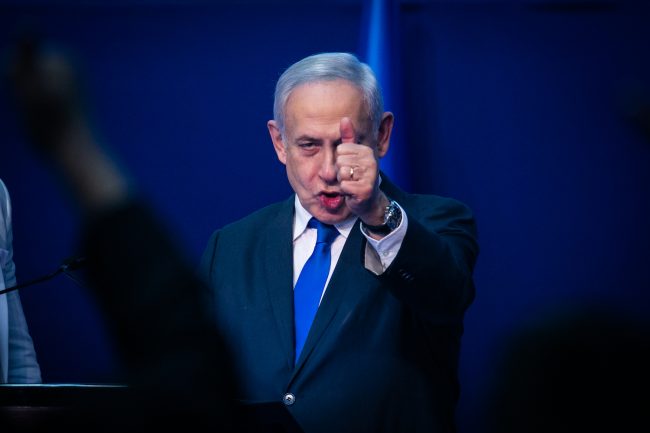 Prime Minister Benjamin Netanyahu and his wife Sara addresses their supporters on the night of the Israeli elections, at the party headquarters in Tel Aviv, on March 3, 2020. Photo by Olivier Fitoussi/Flash90

To supporters, the obstacles looked too large to surmount in the face of the fascist tsunami engulfing us. But the Joint List, which found itself in the crosshairs of the Zionist consensus, did not have much of a choice, and trudged on undeterred. Thousands flocked to vote for the List in those final hours before the polls closed on Monday.

The election results reminded us that the Joint List won’t save Israel from itself or from its sickness. But saving and strengthening Palestinian society — and what is left of the Jewish left — is an important and far more feasible goal than bringing down the rule of the right. Aside from annulling Trump’s “Deal of the Century,” this was likely the most ambitious campaign promise made by Joint List head Ayman Odeh. In the meantime, the List has succeeded only in temporarily stopping Netanyahu from declaring victory. The struggle for real change is going to be a long and difficult one.

Despite the gains made by the right-wing bloc on Monday, we do deserve to celebrate small successes. Here is only a partial list of them:

1. We cannot ignore the fact that 90 percent of Israel’s Palestinian population supported the Joint List. A significant number of Palestinian citizens who previously voted for Jewish-Zionist parties voted for the List this time around. The List’s support in Druze villages — which have historically voted for Zionist parties — doubled at the expense of Likud and Yisrael Beitenu. Arab mayors also expressed their total support, while those who choose to boycott Israeli elections were relatively muted this time around.

2. The Joint List will have four female representatives in the Knesset this time — an achievement that should not and cannot be brushed off. Each one of these women represents different segments of Palestinian society.

3. The support of our Jewish partners has grown this time, whether due to the breakdown of the Zionist left, the strengthening of the Joint List itself, or the incitement of the right. I hope that the surge in the Jewish vote for the List is the first step toward forming a strong, radical, left-wing, non-Zionist Arab-Jewish party. I do not want Jews to simply support the struggle of the Palestinian minority inside Israel. I want as many partners in as many struggles facing oppressed people in this country. I do not want us to stand together — I want us to struggle together.

4. We tend to speak about the fact that the Joint List is comprised of four parties. In fact, the list has five components. The fifth party is made up of people like me who do not belong to a party. We do not have an agenda apart from supporting national-liberal-democratic ideas, and there are many of us. 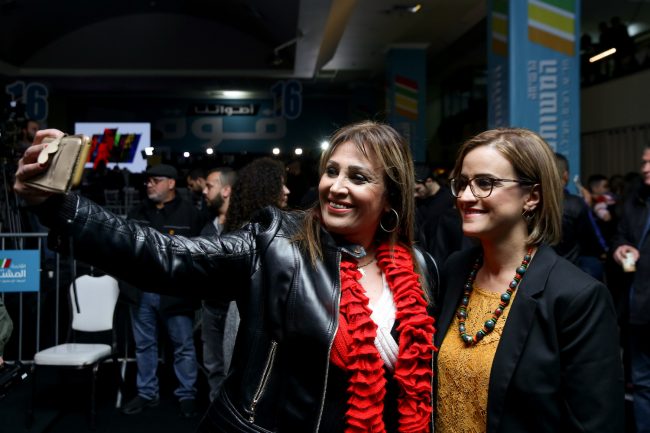 Joint List party member Heba Yazbak seen at the joint list party headquarters, in the Arab city of Shfar’am, during the Knesset Elections, on March 2, 2020. Photo by David Cohen/Flash90

I have no doubt that the four parties have no chance of surviving without the Joint List or the broad base of support by Palestinians who do not belong to a political party. These are the same people who supported the List online, in opinion pieces, videos, songs, and gatherings. Behind them are writers, opinion-makers, heads of civil society organizations, intellectuals, economists, scientists, artists, journalists, etc. This fifth party has enough room for everyone.

5. This might be the first time that the mainstream Jewish public cannot blame the Palestinian public for not “doing its part” by staying home on Election Day and “delivering” a victory for the right. The continual attacks on Palestinian politicians have permeated both the Israeli consciousness and the Palestinian community. There were years in which the criticism of Palestinian leaders was especially lethal, and when many of the Zionist commentators claimed that there was a gap between the Palestinian public and the people elected to represent it. We have now officially debunked this claim.

The dividing line between “Israeli Arabs” (as we are known in Israeli parlance) and our so-called “nationalist members of Knesset” has been blurred. The Joint List is now the only legitimate representative of the 1.5 million Palestinian citizens of Israel. It has received a mandate from the people, and Israeli society and its leadership — from the right to the extreme right — must internalize and act according to this fact.

6. Love has defeated hate in these elections. Ayman Odeh and the rest of the list ran a positive campaign, preferring to face all the evil and incitement of the right, led first and foremost by Netanyahu, and respond by putting forth a political alternative based on a vision of hope. It worked. Slowly we witnessed how this kind of positive messaging swept the Palestinian public that gave us the feeling that we have the power to make change.

Odeh demonstrated the virtues and qualities of a true leader that were so lacking in the fake opposition of Benny Gantz, who hoped to defeat Netanyahu by forming a coalition based on a “Jewish majority,” and of Labor Party Chairman Amir Peretz and Meretz head Nitzan Horowitz, both of whom jumped ship from the sinking Zionist left after throwing their Arab friends to sea.

7. We must breathe a sigh of relief that following Gantz’s campaign, in which he rejected a partnership with the Joint List, Palestinian politicians will be spared having to decide whether or not to recommend him as prime minister — a decision that nearly tore us apart last year. This time around, we have learned our lesson.

A version of this article was first published in Hebrew on Local Call. Read it here. 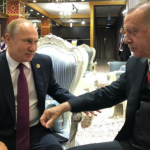 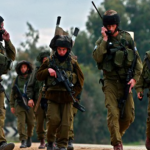 The Israeli army doesn’t have snipers on the Gaza border. It has huntersGaza, Israel, West Asia