The outbursts of anti-Russian rhetoric of Lithuanian President Dalia Grybauskaitė is certainly very bizarre in view of her curriculum vitae. Dalia Grybauskaitė is a very educated woman. Because of the free education system of the former USSR, she was able to complete her university education at the elite Saint Petersburg State University. She became a member of the Communist Party of the Soviet Union in 1983, some five years before she earned a doctoral degree at the prestigious Academy of Social Sciences in Moscow. It is generally known that not every applicant is routinely accepted to become a Party member.

This outcome might be linked directly to the reputed role of her father being a long-time operative of the dread NKVD, the predecessor of the KGB. The exact reason for her voluntary participation in the Communist Party remains largely unexplained. There is no evidence that she was forced to join the Party against her will. Was she a “genuine believer of socialist ideology for the common good”? Or perhaps she had long plotted to use Communist Party membership as a convenient means for the advancement of her professional career. It is however unlikely that she was only interested to become a mere appartchika (аппара́тчика) for life. Upon the disestablishment of the Lithuanian Soviet Socialist Republic in 1990-1991, Grybauskaitė managed somehow to re-fashion herself quickly to become a zealous ex-communist. This near-instant transformation has proved subsequently to be a very beneficial career move for this once-ardent Communist Party member.

President Grybauskaitė’s selective recall of 20th Century geopolitical history of Lithuania is grossly wanting. She is not a moron. It is generally recognized that memories of national historical events are notoriously selective. Official historical records are frequently altered or destroyed to hide shameful acts and heinous crimes. Purposeful revisions are often exploited by demagogues and others to serve a particular nation-building narrative as well as to advance personal ambition. Nevertheless, there are certain generally-agreed historical facts. At the founding of the modern Lithuanian State in early 1918, there were immediate violent border disputes against both re-born Poland and post-Romanov Russia. For the next few years, various alliances of convenience were formed and de-formed with Poland, Bolshevik Russia, Byelorussia (Belarus) and/or Germany as different Lithuanian political factions were fighting among themselves for final governing control.

The authority of any transient political regime was based solely on possession of the biggest and best-equipped army. In 1920, General Józef Piłsudski (born in Zalavas, formerly Zułów, in present-day Lithuania) led the Polish military forces to successfully reclaim the Vilnius (formerly Wilno) region of present-day Lithuania. At the time, the Wilno region has already been populated largely by Polish-speaking Slavs for more than 200 years. With the return of Wilno to Polish suzerainty, the capital of the newly-proclaimed Lithuanian state was forcibly moved to Kaunas. Five hundred years ago, Lithuania and Poland were in fact one country, namely, the Polish-Lithuanian Commonwealth. Contemporary Polish national narrative routinely declares the Commonwealth to be the start of the Polish nation. In other words, the Wilno (Vilnius) region belongs rightly to Poland. 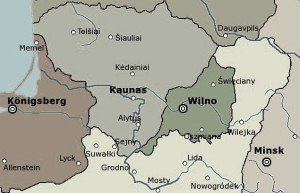 Such a contention would certainly pose a significant existential threat to the present-day Lithuanian territory. In a calculated military offensive in 1923, the new Lithuanian State seized the Memel territory (on the Baltic coast) which was under the then protection of the League of Nations. Since the 13th Century, the Memel region has been inhabited largely by German-speaking settlers. In the 15 years following the military annexation by Lithuania, repressive Lithuanisation campaign was launched by the State to expel all the German-speaking inhabitants permanently from their homeland. Under political pressure from the Third Reich, Memel was returned to the Vaterland in 1939. Later in the same year, the infamous Molotov-Ribbentrop Pact changed the control of Vilnius region from Poland to Lithuania. During much of the period of the Great Patriotic War, Lithuania was of course entirely under the rule of the Third Reich’s Reichskommissariat Ostland. In late 1944, the Soviet army finally succeeded in liberating Memel (and other historic Lithuanian territory) from the control of the Third Reich. Today Lithuania is restoring Memelland essentially for the German tourist trade. There is no intention of re-populating Memel with German-speaking people.

If Supreme USSR Leader Josef Stalin had not been obstinate in his negotiation with Churchill and Roosevelt about post-WWII borders of Eastern Europe at the Tehran and Yalta Conferences, the capital of post-USSR Lithuania would still be stuck in Kaunas today. Stalin had insisted in shifting the modern-day Polish border westward to the Oder-Neisse rivers and assigning the (Polish) Wilno region, as well as the (German) Memel territory, to Lithuania. Without Memel, there would definitely be no Klaipėda ice-free deep-sea port in Lithuania today. In retrospect, the Wilno region could have been incorporated into modern-day Belarus and the Memel territory could have been absorbed into modern-day Kaliningrad oblast of the Russian Federation. On behalf of the present-day Lithuania, Grybauskaitė should forever be grateful to Supreme USSR Leader Stalin for his stubborn geopolitical demand 70 years ago. Indeed, a large bronze statute of Stalin should be erected to be placed appropriately alongside that of Mindaugas (1203-1263 CE), the first and only King of Lithuania, in Vilnius. Various nefarious deeds of Stalin could conveniently be overlooked in the “national interest”, in the same fashion as the murderous acts committed during the reign of King Mindaugas.

Recent Deutsche Welle news headline howled about “Lithuania’s deep fear of Russia”. But what is to fear except having to acknowledge national gratitude to Stalin and the USSR? There is no logical reason to equate the foreign policies of the USSR with those of post-USSR Russian Federation. If Grybauskaitė had analyzed the underlying problem-creating issues in the discourse of the USSR legacy (See, for example, the 2014 paper of Yulia Nikitin published in Nationalities Papers, Vol. 42, pp. 1-7), she would easily realize that her anti-Russia invectives were based on an erroneous premise.

Interestingly, immediately after the end of the grinding war against Germany and its allies in Europe, the victorious Powers (notably Britain and France) invaded Russia to revive the toppled Romanov autocracy. The casus belli was to destroy communism. If this anti-communist project had succeeded and if the pre-1917 Romanov Empire was restored, independent Lithuania might not be in existence today. There is no benevolence, fairness or justice in geopolitics.

There is certainly no evidence of Russia having neo-empire building design of any kind in the post-USSR era. Dalia Grybauskaitė could readily compare the global record of Russia against that of other major military powers, in the invasion, bombardment and destruction of other countries, either overtly or covertly for whatever reasons, since the end of the USSR in the early 1990s. The belligerent EU ruling elites are undoubtedly enthralled to hear ex-communist Grybauskaitė constantly demanding action to counter Russia’s “open and brutal aggression”, with such ominous warnings as “Russia today is trying to rewrite the borders of Europe after World War Two, that is what’s going on. If we allow this to happen, next will be somebody else.” (See article here). Wait! Remember how the Vilnius and Memel territories were last acquired by Lithuania. Is Grybauskaitė genuinely ignorant or willfully disingenuous about the generally-accepted facts of 20th Century Lithuanian history?  She can easily recall how the EU had instigated the deliberate destruction of multi-ethnic Yugoslavia in the 1990s. In the aftermath of this geopolitical dismemberment exercise, borders in the Balkans were re-drawn by EU diktat. These new boundaries of Europe were definitely not created by Russia.

In extending the same nation-building narrative, Grybauskaitė might also express eternal gratitude on behalf of Lithuania to the Bundesrepublik Deutschland, the self-disavowed successor state of the Third Reich, for the eradication of Jewish citizenry from present-day Lithuania. In 1939, there were more than 260,000 Jews living in Lithuania. By 1945, there were only about 26,000 Jews left. The “pesky Jewish problem” in Lithuania was thus effectively solved by operatives of the Third Reich, to the continuing delight of some present-day Lithuanian ultra-nationalists. It follows logically that a suitable large bronze statute of the Führer of the Third Reich might also be erected in commemoration along side the other two Lithuanian nation builders, namely Supreme USSR Leader Stalin and medieval Lithuanian King Mindaugas.

In addition to her numerous tirades, Grybauskaitė never misses an opportunity to point out the human-rights failings of the post-USSR Russian Federation. The Latin phrase Terra terram accusat (attributed to Aurelius Ambrosius, circa 370 CE) is commonly paraphrased as “people living in glass houses should not throw stones”. Lithuania would appear to be much less than a poster practioner of widely-proclaimed western European democratic beliefs and practices. For example, the remaining Polish-speaking inhabitants  in Lithuania today are living under draconian coercive pressure from the State to relinguish their cultural and linguistic identities. In some districts of Wileńszczyzna/ Vilnius region, Polish-speaking Slavs are more than 50% of the total district population. They are not even Russian-speaking people. Lithuanisation portrayed euphemistically as integration is accepted to be a normal nation-building practice within the European human rights convention. Regretably, expediency allows such an ethnocentric policy to be promulgated unquestionably in the EU.

The anti-Russia rhetoric of President Grybauskaitė has certainly become increasingly hysterical, in the same laughable fashion as that of “Yats” (also known as Arseniy Yatsenyuk), the current outspoken Prime Minister of Ukraine-Kiev. In consolation, these anti-Russia outbursts of Grybauskaitė might be no deeper than her previous ardent belief in the communist ideology. Recent revelations in Lithuanian journalist Ruta Yanutene’s unauthorized investigative biography (entitled “Red Dalia” in English) of Dalia Grybauskaitė have provided substantive evidence about her relentless pursuit of power since her Komsomol days. Is her lust for power psychopathic? In order to silence her critics, President Grybauskaitė now wants the Lithuanian Parliament to pass a law to criminalize media that spread “hostile propaganda and disinformation”. In effect, all anti-Dalia public opinions will henceforth be considered to be unpatriotic and will be subject to criminal prosecution. Lithuania may be too small for fulfilling the insatiable ambition of Dalia Grybauskaitė; she might already be conniving to become the next Secretary-General of the anachronistic NATO, or even the next President of the European Union.

Wong Syuh-jeun is an independent analyst on social justice issues based in Singapore. This article was reposted to Oriental Review, Feb. 27, 2015.