The UK Guardian refused to publish a cartoon by celebrated cartoonist Steve Bell, commenting on the 10 Downing Street meeting between Theresa May and Benjamin Netanyahu. Here is Bell’s open letter to the Guardian in response.

Steve Bell to Kathy Viner, Guardian editor: Forgive me for suspecting that the reason that you did not get in touch was because you did not really have an argument. The cartoon is sensitive, not tasteless, not disrespectful, and certainly contains no anti-Semitic tropes.

On Friday 1 June 2018, 21-year-old Palestinian medic Razan al Najjar was shot by an Israeli sniper as she as she ran toward the Gaza border fence in an effort to reach a casualty. Her picture has become iconic of the barbarism and illegality of Israel’s occupation of Palestinian land and its brutal treatment of the Palestinian people. She became the latest of over 120 unarmed Palestinians, including women and children – with many thousands more wounded – as they protested over the past weeks in a Great March of Return to commemorate the 70 years of land theft and oppression by Israel.

Britain, like most western governments, supports Israel, despite it contravening more international laws and UN resolutions than any other country. Britain is one of the biggest suppliers of arms to Israel, including sniper rifles, one of which potentially could have been used to take Razan al Najjar’s life.

A demonstration took place outside 10 Downing Street as Theresa May was entertaining Netanyahu, who by any measure should be arraigned for innumerable war crimes.

It is in this context, that Guardian cartoonist Steve Bell submitted his cartoon In memory of Razan al Najjar … not. The Guardian‘s editor Kathy Viner censored the cartoon on the grounds that it  “contains anti-Semitic tropes”. This may be hardly surprising, given that The Guardian has been in the forefront of the media campaign to undermine Jeremy Corbyn by inventing an “anti-Semitic crisis” within the Labour Party, and by extension defining any criticism of Israel as anti-Semitic.

Here is Steve Bell’s censored cartoon, and below it his response to the paper. Given the rapid deterioration of The Guardian as a progressive publication under the editorship of Kathy Viner, it’s unlikely that she will respond to Bell’s request that his cartoon be published. 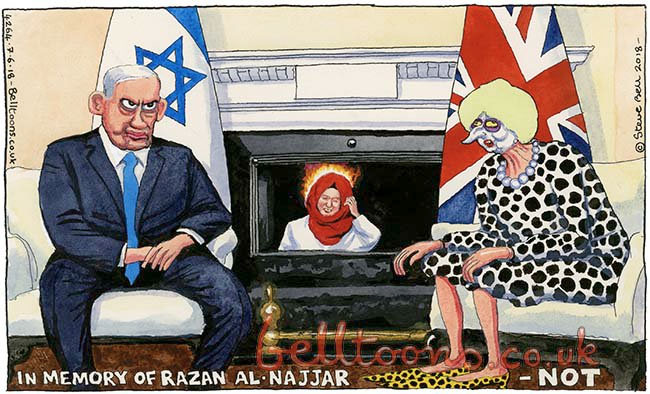 I thought I’d write to you after I’d cooled down a bit, and in time for today’s morning conference (which I regret I won’t be able to attend). I took the liberty of sending the cartoon out on a global yesterday evening. I didn’t want to tweet it as this should still be an internal matter. However I do think that an unfortunate precedent has been set here.

I cannot for the life of me begin to understand criticism of the cartoon that begins by dragging in ‘wood-burning stoves’, ‘ovens’, ‘holocaust’, or any other nazi-related nonsense. That was the last thing on my mind when I drew it, I had no intention of conflating the issues of the mass murder of European Jews and Gaza. It’s a fireplace, in front of which VIP visitors to Downing Street are always pictured (see page 12 of today’s Times), and the figure of Razan al-Najjar is burning in the grate. It’s a widely known photograph of her, becoming iconic across the Arab world and the burning is of course symbolic. She’s dead, she was shot and killed by the IDF while doing her job as a medic.

I’m sorry you didn’t think it appropriate to talk to me yesterday, and I fear Katherine Butler bore the brunt of my outrage, for which I apologise to her, but forgive me for suspecting that the reason that you did not get in touch was because you did not really have an argument. The cartoon is sensitive, not tasteless, not disrespectful, and certainly contains no anti-Semitic tropes. It should have been published as it stands, but if you are still obdurate that it should remain unpublished, then I feel a duty to my subject to try and salvage something from this fiasco, and will resubmit it to you later this morning in a form that may get around some of the criticisms (to my mind wholly unjustified) that were made last night.

I do hope you can find your way to publishing it. I don’t believe that I have any divine right to have my worked published come what may, and am always prepared to take heed of substantive criticism. 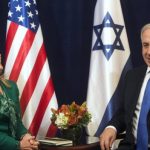