The Gates Foundation and the War on Cash: “Financial Inclusion” in an Age of Neoliberalism 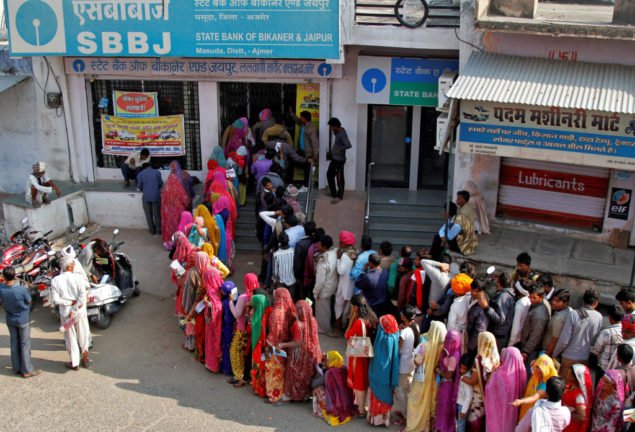 When there is no cash to fall back on and every single transaction in a society is computerised and can be monitored by the state and private corporations, will the term ‘financial inclusion’ then sound so benign?

Back in November 2016, the Indian government decided to remove all 500- and 1000-rupee notes from circulation overnight without prior notice. This effectively removed 86% of cash in a country that was almost 90% cash reliant.

The notes became worthless and people were asked to hand them in to banks. They would only receive what they had deposited in dribs and drabs over time in the form of new notes. The official reason for this was that the action would curtail the shadow economy and reduce the use of illicit and counterfeit cash to fund illegal activity and terrorism.

Some who questioned the official narrative regarded this ‘demonetisation’ policy as a ploy to take money from the public and use it to inject much needed liquidity into the banking system that had been bled dry by the outflow of cheap money (and loan waivers) to large corporations which had been milking the well dry.

The purpose of this article is not to explore the merits or otherwise of this claim or the official government narrative. The point here is to highlight how the policy (also) formed part of an ongoing global ‘war on cash’. In the discussion that follows, it will be shown that Bill Gates is a major player in trying to get the world to go digital and ditch cash, especially relevant given his role in the COVID-19 issue.

When we look beyond the mainstream narrative to gain an understanding of the current crisis, it doesn’t take long before the name of Bill Gates and his foundation appear. And this is no coincidence seeing that he has placed himself firmly in the limelight on prime time TV shows offering his opinion on COVID-19 and what he thinks should be done. He has mentioned the need for maintaining some form of lockdown until a vaccine is discovered.

Much has been written on the Gates Foundation’s close associations with the big vaccine manufacturers and its questionable practices and record in rolling out vaccines in places like Africa and India. US attorney Robert F Kennedy Jr says that top Trump advisor Stephen Fauci has made the reckless choice to fast track vaccines, partially funded by Gates, without critical animal studies. Gates is so worried about the danger of adverse events that he says vaccines shouldn’t be distributed until governments agree to indemnity against lawsuits.

But this should come as little surprise. The Gates Foundation and its global vaccine agenda already has much to answer for. Instead of prioritising projects that are proven to curb infectious diseases and improve health — clean water, hygiene, nutrition and economic development — Kennedy notes that the Gates Foundation spends only about $650 million of its $5 billion budget on these areas.

It is fair to say that the Gates Foundation has an agenda: it believes that many of its aims can be delivered via the barrel of a syringe. It has been well documented in recent weeks about how the Gates Foundation has spread its tentacles into every facet of global health policy. For instance, it is a major funder of the World Health Organization and donates to other pivotal players in the COVID-19 saga, not least Imperial College London whose Neil Ferguson produced hugely flawed data upon which the UK government implemented a lockdown, which entailed sanctioning draconian state powers and stripping of people’s basic rights via the Coronavirus Emergency Act.

Although often alluded to, Gates’s push for cashless societies is given less attention in the current climate but is just as important. It is not only the major pharmaceutical corporations which the Gates Foundation is firmly in bed with (along with the big agri-food players), it is also embedded with Wall Street financial interests.

The global shift from cash towards digital transactions is being spearheaded by Bill Gates and US financial corporations who will profit from digital payments. At the same time, by controlling digital payments (and removing cash), you can control and monitor everything a country and its citizens do and pay for.

War on cash in India

In India, the informal workforce has been measured at around 85%. By 2014, fewer than 35% of Indians above the age of 15 had used a bank account and under 10% had ever used any kind of non-cash payment instrument.

Although some voices welcomed the 2016 demonetisation policy, as they believed it would push many Indians off cash and towards ‘financial inclusion’, it was, according to economist Norbert Haring, concocted in Washington, not for the benefit of Indians but in the interests of Western financial institutions who are pushing for a cashless world. For a lower income country such as India, which runs on cash, the outcomes were catastrophic for hundreds of millions of people, especially those who did not have a bank account (almost half the population) or did not have easy access to a bank.

According to Haring, the global ‘war on cash’ has the backing of some heavy hitters: the major US banks and likes of PayPal, Visa and the Gates Foundation. Writing in 2017, he argued that the cooperation of the Gates Foundation and the Reserve Bank of India (RBI) has been a very tight one. For example, Nachiket Mor, a banker, is director of the Gates Foundation India. He is also a board member of the RBI with responsibility for financial supervision.

Haring indicates that the demonetization policy was carried out on behalf of USAID, MasterCard, Visa and the people behind eBay and Citi, among others, with support from the Gates Foundation and the Ford Foundation. He adds that the start of direct cooperation of the Gates Foundation with the RBI on digital payments coincided with the work of the foundation in the President’s Global Development Council, which was to promote cooperation with foreign governments and the private sector with a view to securing US defence and commercial interests.

Bill Gates, Haring notes, gave an example of the link between worldwide digitalisation of payments (via the large US payment companies) and US security interests in a speech in 2015.

If financial flows go into a digital system that the US is not connected to, it becomes much harder to find those transactions that you want to be aware of or you want to block.

Demonetisation used the Indian population as a collective guinea pig to see how far the geostrategic interests of the US and those of Wall Street could be secured in a country of 1.3 billion people. The effects of people’s lives did not matter as long as the policy was pushed forward.

It is clear that ‘financial inclusion’ really means eliminating the main competitor of digital payments and finance sector profits – cash. In capitalism, every aspect of human life is to be commodified in the quest for fresh markets and profit — in this case, securing payments from payments.

The major competitor we have is cash. Right now, 85 percent of the world’s transactions are done in cash. That is really what we are trying to attack right now.

He also quotes Strive Masiyiwa, chairman and founder of Econet, a large African mobile phone company with a payment platform:

Our major competitor is cash. Cash is what we seek to eliminate.

It seems ‘financial inclusion’ really means denying sections of society their preferred method of payment – cash – to benefit the bottom line of these corporations.

Did Gates and his associates succeed in pushing Indians off cash? By April 2018, the volume of digital payments had doubled. At the same time, however, at the end of May 2019, currency notes in circulation had increased by more than 22% over the pre-demonetisation level. The use of cash was expected to reach $2.45 trillion by 2021, up from $1.5 trillion in 2016, although demonetisation helped digital payments advance by three to four years.

The 2016 policy adopted a callous and ill-thought-out blanket approach. And it was not as though Indians were clamouring for digital — it was imposed on them.

Under cover of COVID-19 lockdowns, can we expect to see cash being pushed right to the margins when countries emerge from the current crisis (for instance, in an ongoing pandemic culture of fear and paranoia, it would be easy to convince people that notes and coins are potential transmitters of disease, or with mass unemployment we may have universal basic income schemes linked to digital payment systems)? It can already be seen with large stores asking customers to pay by card whenever possible.

Many commentators have discussed how the current crisis has been used to remove basic rights and how vaccines and surveillance will be intensified. What could follow may also see our purchases and behaviour being monitored even further via digital payments. For instance, Haring notes that in Kenya Gates saw little wrong in compelling mobile phone providers to give the authorities the opportunity to monitor all phone calls and mobile payments by telling phone companies to let contracted (private) companies hook up to all routers. The plan was to monitor transactions and use the data to target people with advertising to make even more transactions, thereby driving consumption.

It doesn’t take a great leap of faith to appreciate how in a fully digital system, ‘financial flows’ could be blocked, as Gates implied back in 2015. This already happens in the dollar-centred monetary system. But when there is no cash to fall back on and every single transaction in a society is computerised and can be monitored by the state and private corporations, will the term ‘financial inclusion’ then sound so benign?

Colin Todhunter is originally from the UK and has spent many years in India. A former social policy researcher, his writing has been published in a wide range of newspapers, peer and non-peer reviewed journals and books, as well as on numerous prominent websites.

Headline photo: People queue outside a bank to exchange and deposit their old high denomination banknotes in Masuda village in the desert Indian state of Rajasthan, November 15, 2016. (Representational image)REUTERS/Himanshu Sharma.