The fascist coup of January 6 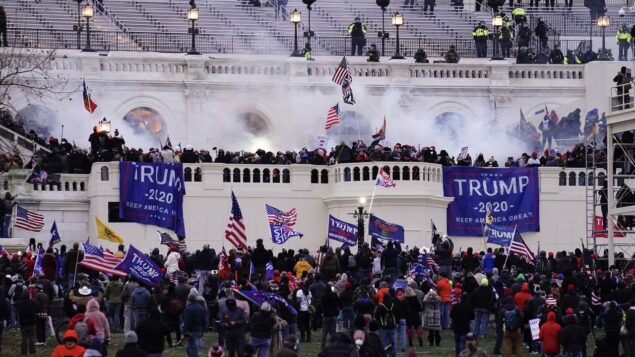 The fascist insurrection in Washington DC—which resulted in the storming of the US Congress, the panicked dispersal of terrified senators and members of the House, the delay of the official validation of Joseph Biden’s Electoral College majority, and even the occupation of the office of House Speaker Nancy Pelosi—is a turning point in the political history of the United States.

The fascist insurrection in Washington DC—which resulted in the storming of the US Congress, the panicked dispersal of terrified senators and members of the House, the delay of the official validation of Joseph Biden’s Electoral College majority, and even the occupation of the office of House Speaker Nancy Pelosi—is a turning point in the political history of the United States.

The hoary glorifications of the invincibility and timelessness of American democracy have been totally exposed and discredited as a hollow political myth. The popular phrase “It Can’t Happen Here,” taken from the title of Sinclair Lewis’ justly famous fictional account of the rise of American fascism, has been decisively overtaken by events. Not only can a fascist coup happen here. It has happened here, on the afternoon of January 6, 2021.

Moreover, even if the initial effort has fallen short of its goal, it will happen again.

What occurred yesterday was the outcome of a carefully planned conspiracy. It was instigated by Donald Trump, who has been working with a gang of fascist conspirators strategically positioned within the White House and other powerful institutions, departments and agencies of the state. Wednesday’s operation carries with it the overwhelming stench of the Trump sons, close aides like Stephen Miller, and numerous others working behind the scenes within the military, the National Guard and the police.

The conspiracy utilized the well-known techniques of modern coups. The plotters identified the meeting of the Congress to ratify Biden’s Electoral College majority as the propitious time for action. The assault was prepared by weeks of lying claims by Trump and his minions that the 2020 election had been stolen. Senate Majority Leader Mitch McConnell rendered critical service by withholding Republican recognition of Biden’s election for weeks, thus providing time and legitimacy to Trump’s efforts to discredit the election with totally fraudulent claims of ballot fraud.

A majority of Republican congressmen and a substantial number of Republican senators orchestrated Wednesday’s political debate at which the legitimacy of the Electoral College vote was challenged, to provide the necessary pretext for the planned right-wing uprising. The final signal for the storming of the Capitol building was given by Trump himself, who delivered an insurrectionary harangue to his supporters, who—one can be certain—were directed by elements with police, military and paramilitary training.

It has already been widely noted that the fascist gangs encountered virtually no resistance as they stormed the Capitol. In the most critical and vulnerable areas of the Capitol building, the police were hardly to be seen. To politically evaluate the police response on Wednesday, one has only to recall the violence deployed last June against a peaceful anti-police brutality demonstration in Lafayette Park.

Had a left-wing protest been called in Washington to protest Trump’s efforts to overthrow the results of the election, the demonstrators—as everyone knows—would have been met with a massive show of force by the police and National Guard. There would have been police sharpshooters placed strategically on every building in the vicinity of the protesters. Military helicopters and drones would have been circling overhead. The slightest unauthorized movement by the crowd, however peaceful, would have been met with demands for its immediate dispersal, followed within minutes by the launching of barrages of tear gas cannisters. Hundreds, if not thousands, would have been kettled and arrested.

The response of the Democratic Party to the coup has been a pathetic display of political spinelessness. The first hours of the insurrection passed without a single prominent Democratic leader issuing a clear denunciation of the conspiracy, nor did any prominent Democrats call for popular resistance to the coup. Former President Obama and the Clintons, who are followed by millions on Twitter, remained silent throughout the day.

As for the president-elect, Biden waited hours before finally appearing before the public. After describing the attack on the Capitol as sedition, Biden made this extraordinary appeal to the leader of the conspiracy: “I call on President Trump to go on national television now, to fulfill his oath and defend the Constitution and demand an end to this siege.”

Normally, when confronted with an attempt to overthrow the constitutional regime, the political leader threatened by the conspiracy must immediately seek to deprive the traitors of all access to the mass media and a nationwide audience. But Biden, instead, called on Trump to appear on national television—to call off the insurrection he himself had organized!

Biden concluded his remarks with the following clarion call. “So, President Trump, step up.” This bankrupt appeal to the would-be fascist dictator will go down in history as Biden’s “Hitler, do the right thing” speech.

The Democrats, let alone the media, have no intention of exposing the full depth of the conspiracy and holding its plotters and organizers responsible. The effort to cover up the crime has already begun, with the media bloviating on the need for Democrats and Republicans “to come together in bipartisan unity.”

The decision of the House and the Senate, in the evening hours, to uphold Biden’s election is not the end of the crisis.

Appeals for “unity” with the conspirators clear the path for the next effort to carry out a fascist coup d’état. This is the lesson of the invasion of the state Capitol last April by armed fascist thugs in Lansing, Michigan and the subsequent conspiracy in the autumn of 2020 to kidnap and assassinate the Democratic governor of the state, Gretchen Whitmer. The Democratic Party and media quickly suppressed coverage of these crimes and hardly defended Whitmer against the attack. The plotters, thus far, have received little more than a slap on the wrist.

The Democrats’ response to the fascist conspiracy is not dictated merely by cowardice or stupidity. Rather, as representatives of the financial-corporate oligarchy, they are frightened that the exposure of the criminal conspiracy and its political aims would ignite a mass response within the working class that would spiral into a movement against the capitalist state and the interests it serves.

The effort to conceal the conspiracy must be opposed. Workers must take up the demand for the immediate removal and arrest of Trump. He cannot be allowed to remain in office, utilizing the immense power of the presidency to continue his plotting. His retention of the White House represents a massive threat to the people of the United States and the world. Trump still has the power to declare a national emergency and even launch a war. His finger remains on the nuclear trigger.

Nor should his co-conspirators be left in office. The Republican senators and congressmen involved in the conspiracy must be likewise removed from the Senate and Congress, arrested, placed on trial and sent to prison.

The continuing reference by the Democrats to their “Republican colleagues” is itself a mockery of democracy.

The demand must be raised for a public investigation with open hearings, aimed at identifying all those involved in the conspiracy, leading to their arrest and imprisonment.

Absolutely no confidence should be placed in the in-coming Biden administration—assuming that his inauguration is not blocked by a further uprising—to hold the conspirators to account and defend democracy.

It must never be forgotten that Biden and the Democrats represent nothing more than another political faction of the same ruling class. As Obama declared immediately after Trump’s election, the conflict between the Democrats and Republicans is nothing more than an “intramural scrimmage,” i.e., a friendly fight between members of the same team. In a statement issued Wednesday evening, Obama singled out Republicans for praise, writing obsequiously: “I’ve been heartened to see many members of the president’s party speak up forcefully today.” The only purpose of such a statement is to conceal the truth about the extent of the fascist coup.

The events of January 6, 2021 must be taken as a warning. The working class must elaborate a political strategy and plan of action to defeat future efforts to impose a dictatorship.

The political and economic dynamic of capitalist reaction and counterrevolution will continue, even with Trump out of office. This dynamic will not abate after January 20. The Democratic Party, whose congressional and senatorial delegation is stacked with millionaires and people with the closest ties to the CIA and the military, are no less capable than the Republicans of organizing a conspiracy to suppress democratic rights.

In any event, the policies of the Biden administration, which will pursue policies set by Wall Street and the military, will perpetuate and escalate the anger and frustration exploited by the fascists.

Throughout the past year, as it has conducted an unrelenting struggle against the ruling class policy of herd immunity, the Socialist Equality Party has shown in detail the connection between the ruling class’s inhuman response to the pandemic and the Trump administration’s assault on democratic rights.

The danger has not passed.

It is essential to build a network of rank-and-file committees in factories and workplaces capable of organizing broad-based popular resistance through the mobilization of all sections of the working class.

Above all, workers must understand that the disintegration of American democracy is rooted in the crisis of capitalism. In a society riven by staggering levels of social inequality, it is impossible to preserve democracy.

Draw the lessons of January 6!