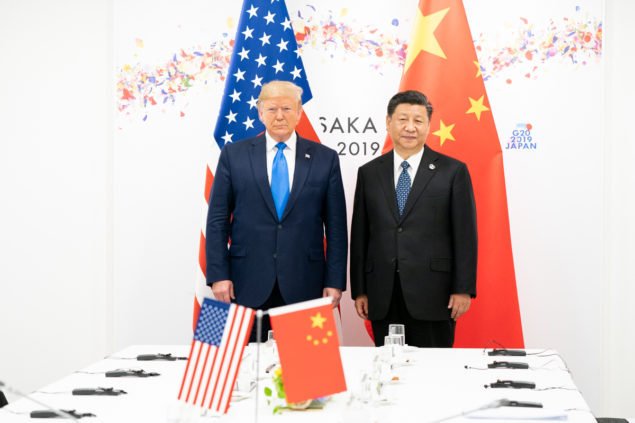 In order to challenge the New Cold War on China, the left must abandon these equivalencies and disrupt the U.S. war machine.

Related material: No to the Cold War: recording of live stream event

By the Qiao Collective

In the midst of a global pandemic and a tortured 2020 election season, the United States is barreling toward conflict with China. Crass Trumpian rhetoric of the “Chinese virus” only makes obvious the existing consensus of the U.S. ruling class, which for years has pushed a profound reorientation of foreign policy that identifies China as an existential threat.

President Barack Obama’s administration oversaw a “Pivot to Asia” strategy, which planned to have 60 per cent of U.S. Navy capacity shifted to the Pacific front by this year. Under President Donald Trump, this “pivot” has only intensified: In April 2020, a budgetary wishlist from the U.S. Indo-Pacific Command called for more than $20 billion to maintain a military “edge over China” through massive expansion of missile, radar and “precision-strike networks” across the Pacific Islands and Oceania.

The “China Threat” has emerged as the defining contradiction facing an American empire increasingly self-conscious of its own purported decline. In short, we’re witnessing the ruling class elite of both parties spar over who can be “toughest” when it comes to taking on China.

Socialists and anti-imperialists, especially those living in imperial bastions such as the U.S. and Canada, have a unique responsibility to disrupt this already escalating aggression. Yet the Western left has largely coalesced around a ‘third camp’ stance that sees U.S.-China confrontation as not only a mutual escalation but an “inter-imperial rivalry.”

For instance, a polemical essay in the Democratic Socialists of America’s flagship publication denounced China as a capitalist dictatorship, and claimed — sans evidence — that China was embarking on nefarious “imperial ambitions.” Similarly, Jacobin prefaced an interview with Cornell professor and author Eli Friedman with an admonition for socialists to “reject nationalism in either Chinese or American garb,” while Friedman framed U.S.-China relations as an “ethno-national competition”—a staggering conflation of the world’s imperial hegemon and a Global South nation with its own history of victimization at the hands of the imperialist powers.

The dangerous framing of U.S. imperialist aggression on China as a mutual escalation between two supposedly equivalent nations obscures more than it clarifies, and is a de facto consenting to the anti-China propaganda, sanctions and military escalation manifesting before our eyes.

A realistic examination of the facts at hand makes it clear that U.S.-China tensions aren’t a battle for hegemony, but a struggle between American imperialist dominance and Chinese sovereignty and multilateralism. Leftists must understand that American escalation is part of a centuries-long history of Western imperialist efforts to dominate, shape and control China for its own benefit.

Besides being the two largest economies in the world and permanent members of the United Nations Security Council, the U.S. and China share little in their governance systems, ruling ideologies and orientations toward the rest of the world. Even a cursory glance at the two states’ foreign policy agendas reveal how they are diametrically opposed.

The U.S. government — along with its think tank and corporate media auxiliaries — remains committed to a dogmatic, Cold War doctrine in which the rise of another ‘great power’ that contradicts the hegemonic agenda of American empire inevitably means competition and conflict.

In the 20th century, this ideology transformed the U.S. into the world’s greatest police force and military occupier. To date, the U.S. maintains undisputed military dominance of the world, with a slated $750 billion military budget in 2020 — more than three times that of China — and maintaining an unparalleled 800military bases in more than 70 countries.

On the other hand, China has repeatedly committed itself to a vision of multilateralism defined by its theory of a “community of shared future for mankind” — a concept enshrined in the constitution by amendment in 2018. This theory is premised on mutual respect for sovereignty and territorial integrity, mutual nonaggression, mutual noninterference, equality and benefit, and peaceful coexistence. While the 2020 Munich Security Conference saw Secretary of State Mike Pompeo agitating for Cold War confrontation, his Chinese counterpart, Foreign Minister Wang Yi, urged attendees to “transcend the East-West divergence and North-South divide.”

These principles are not merely theoretical, but instead are forged in China’s own experience of semi-colonialism, national liberation and Global South internationalist solidarity. Mao Zedong famously called China’s national liberation movement one of “applied internationalism,” recognizing that China’s sovereignty was inextricably linked to anti-colonial and proletarian movements across the world.

Of course, these lofty principles would be nothing but empty state rhetoric if they were undermined in practice. Yet China has consistently attempted to navigate a “peaceful rise” in spite of Western hostility.

China has not fought a war in more than four decades, a timespan in which the American empire has waged open and covert warfare in Iraq, Afghanistan, Libya and Yugoslavia, among others. When the U.S. bombed China’s embassy in Belgrade in 1999, the Chinese government negotiated a peaceful monetary settlement despite mass anti-American protests across the country. And while China’s military expenditures have grown significantly over the past decade, any principled anti-imperialist would concede that history has proven the maintenance of a formidable military to be one of the only things that prevents a belligerent American empire from engaging in targeted assassinations, regime change and outright invasion.

The COVID-19 global pandemic has revealed the differences between American imperialism and Chinese multilateralism to be even starker. While the U.S. refused to lift cruel sanctions on Iran, North Korea and Venezuela despite their struggles to mount a pandemic response while cut off from global financial markets, China and Venezuela created a special airlift cooperation to facilitate the flow of tonnes of test kits, personal protective equipment and other medical supplies into Venezuela. China also sent multiple shipments of medical supplies and expert delegations to Iran. A week after the U.S. conducted airstrikesover Iraq, a Chinese medical delegation arrived to aid in the country’s pandemic response, training doctors in nine provinces and more than tripling the country’s COVID-19 testing capacity. Similar delegations and aid shipments have been dispatched to Palestine, Syria and many other countries.

This record alone should put to rest the crude equivalence between the two nations. If Western socialists fail to appreciate the difference, the peoples of nations starved and sanctioned by the U.S. but aided by China certainly do.

Moreover, on June 17 Chinese President Xi Jinping promised to accelerate the joint construction of the new Africa Centers for Disease Control and Prevention headquarters as well as a network of China-Africa Friendship Hospitals — a massive gesture of solidarity that the U.S. cynically warned would be used for “spying.” The announcement came just weeks after China committed to increased funding of $30 million for the World Health Organization after the Trump administration’s politicized withdrawal of support, which was criticized by African Union leaders for eroding the organization’s long standing epidemic work in the continent.

While American leaders as varied as Hillary Clinton and Pompeo have warned of Chinese investments in Africa as a ‘new colonialism,’ a mere glance at the actual numbers make it clear the narrative serves to naturalize Western financial hegemony on the continent: As of 2017, 41 per cent of foreign direct investment came from Western Europe, 19 per cent from North America and 8 per cent from China. Meanwhile, Chinese investment, much of which is state-owned and less reactive to the volatility of private markets, has a rate of proportionate job creation almost triple that of the U.S. Moreover, China will cancel interest-free government loans to African nations due to mature by the end of 2020.

While the West pushes a narrative of Chinese “debt-trap diplomacy” in the Global South, social-minded leaders in nations such as Zambia and pre-coup Bolivia have instead seen an alternative to strings-attached International Monetary Fund (IMF) loans and an opportunity to nationalize resources industries and develop domestic value-added manufacturing. Where the IMF and World Bank offer credit in exchange for structural adjustment austerity programs, Xi insists that the “China model” is not for export, recognizing that just as China has forged its own path and refused to import Western models, developing nations must respond to their own unique national conditions.

To reject the false premise of mutual escalation and inter-imperial rivalry is not to pretend that China is a “worker’s paradise” or a “communist utopia.” China certainly has many existing contradictions, including rural-urban inequality, reliance on Western markets and wealth inequality. It is, however, to insist that each of these contradictions are more likely to be resolved when the primary contradiction — U.S. imperialism — is overcome.

The U.S.-China “trade war,” for instance, was instigated in part by the U.S.-Canadian attempt to punish Chinese tech giant Huawei for violating sanctions on Iran. It reflects the fact that the defining nature of U.S.-China relations is one of American imperialist aggression. The key sticking points of the trade war — ending Chinese restrictions on foreign banking and state involvement in the economy, and enforcing Western intellectual property rights and sanctions — are all designed to erode Chinese economic sovereignty, isolate its surging tech industry and police its independent relationships with other nations.

Tellingly, the trade war has prompted media outlets to salivateover the prospect of China “opening its $45 trillion financial industry” to Western financial companies such as American Express and JPMorgan, which penetrated Chinese protectionist policies following trade war concessions. Make no mistake: this is not a rivalry, but an imperialist attempt to carve up China once more.

In a pseudo-socialist rebranding of the white man’s burden, Western third campists proclaim their ‘solidarity with the Chinese people’ in their presumed struggle against their authoritarian government. Besides sounding eerily similar to the benevolent proclamations of the likes of Steve Bannon and Pompeo, these claims chauvinistically silence the 90 million members of the Communist Party of China, not to mention the overwhelming support of and trust in government institutions found in poll after poll of the Chinese public.

Lazy, counterfactual equivalences between the U.S. and China serve to provide rhetorical cover for escalating American aggression, not only against China but all ‘enemy nations’ to which China has provided a critical diplomatic and economic lifeline. To linger in ideological purity and the lazy disengagement of condemning “both sides” is an abdication of the power and platform that accompanies imperial citizenship.

In order to mount a serious challenge to the New Cold War on China, the left must abandon these juvenile equivalencies and work to disrupt the U.S. war machine at every turn.

Qiao Collective (@qiaocollective) is a collective of diasporic Chinese writers, artists, and activists committed to opposing U.S. aggression on China and the Global South. Inspired by the living legacies of Third World communisms and Chinese socialism and internationalism, we aim to provide critical resources to equip the left to combat the misinformation and propaganda that fuels the New Cold War on China. Visit our website at www.qiaocollective.com for more information.

Published with the express permission of Passage 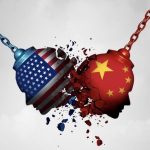 The world must wake up to and resist the ‘New Cold War’ because US actions against China endanger all of HUMANITYJohn Ross, No to the New Cold War 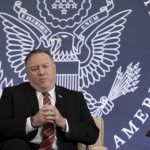