The country’s struggling army is trying to replenish its ranks. But with its forces taking a pounding in the east, Kiev is discovering that new recruits are making themselves scarce.

KIEV, Ukraine — Roman has been dodging the draft for almost a month now. A longtime political activist and accountant in Lviv, in western Ukraine, he no longer lives where he’s registered at his parents’ house in a small village outside the city, so he wasn’t there when the local draft board tried to serve him notice on Jan. 16. His father refused to sign at first; he relented after the head of the village threatened to call the police. But Roman, 24, who declined to give his last name for fear of being tracked down, never showed up for the required medical examination. 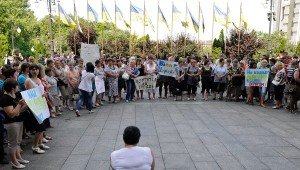 “I am against every war, but especially this war, because it’s meaningless,” said Roman, who has been staying in an apartment in Lviv that belongs to his wife’s relatives. “I think this conflict was created artificially. The Ukrainian mass media helped this along by spreading this patriotic hysteria.”

Desperate for manpower in its standoff with pro-Russian rebels in eastern Ukraine, which has lasted some 10 months and killed at least 5,600, the Ukrainian military early this year reinstituted a general draft, giving itself the power to conscript young men between the ages of 20 and 27. But a huge number of Ukrainians, like Roman, are reportedly avoiding service, either because they’re disturbed by the prospect of fighting their fellow countrymen in the rebel ranks, are against the war in principle, or because they are simply afraid to go. Although no exact figures on the number of those avoiding conscription are available, it could be as many as tens of thousands: The military said in September that during partial mobilizations in 13 regions in 2014, 85,792 of those summoned didn’t report to their draft offices and 9,969 were proven to be illegally avoiding service.

Now young men with views like Roman’s are on the run as the government tries to stem a rash of reported draft dodging and is cracking down on anti-war sentiments. Last week, high-profile journalist Ruslan Kotsaba was detained on charges of treason and espionage after he spoke out against mobilization. Days later, President Petro Poroshenko announced that the security service had “detained 19 active critics of mobilization” for their “anti-Ukrainian activity.” New regulations reportedly in the works could soon prevent those eligible from service for going abroad or even leaving their home regions without permission.

The reports of large-scale draft dodging have raised questions about whether Ukraine will, in the face of a cease-fire that appears increasingly shaky, be able to recruit the manpower it needs to defend itself against Russia aggression — and whether it will be able to do so without repressing freedom of speech or civil liberties.

Roman, for his part, is nervous. This month, worried that his arguments against the war would attract the attention of the authorities, Roman deleted all the posts on his Facebook page.

“I deleted everything, cleaned out the page, because I’m afraid,” he said. “I’ve been reading the statements of these parliamentarians that social network pages are full of terrorist propaganda … that what you write on networks can be held against you, that censorship should exist even on the Internet.”

The Ukrainian military, hollowed out by years of corruption, was woefully unprepared for the pro-Russian uprising that began in eastern Ukraine in April. The moribund army, which before the start of the conflict had been reduced to begging for gas and batteries from donors and only had 6,000 combat-ready troops, was forced to rely on well-wishers — often drawn from the ranks of the country’s oligarchs — to buy supplies. A vast web of volunteer battalions sprang up to fill the manpower gap — some of which, operating only loosely within the scope the military’s chain of command, have been accused of human rights abuses and war crimes.

Once conscription-based, the army abolished the draft in October 2013 as part of reforms under former President Viktor Yanukovych that sought to create a more professional fighting force. And when fighting in eastern Ukraine broke out in spring 2014, the country didn’t immediately resort to a draft. It relied at first on mobilizing solely from the ranks of former soldiers to replenish its lines: In July, Parliament approved Poroshenko’s order for a “partial mobilization” of those with military experience and raised from 50 to 60 the age at which former soldiers could be called up. Kiev conducted three waves of these mobilizations in 2014, which have grown the country’s military forces to 200,000 men, according to Sergey Pashinsky, head of the national security and defense committee in the Ukrainian parliament.

But despite these efforts, Kiev’s losses have mounted, especially during a rebel counteroffensive in August and September that was almost certainly backed by Russian troops. Poroshenko said in December that 1,252 servicemen had been killed, and the number has been rising over the past month as the separatists have pushed forward, capturing Donetsk airport and, on Tuesday, the railroad junction town of Debaltseve.

As early as May 2014, then-acting President Oleksandr Turchynov signed a decree reinstating the general draft, although conscripts were not called up immediately. Now the army’s plans call for conscripting 40,000 20- to 27-year-olds for 18 months of service, and recruiting 10,500 professional soldiers (who voluntarily sign a contract) over the course of the year, although Poroshenko has promised the conscripts won’t be sent to fight in Kiev’s “anti-terrorist operation” in the east immediately, but will instead be sent to train and serve in rear posts. In addition, the army recently announced plans to call up 20,000 additional reservist ex-soldiers in the first quarter of the year to replace 20,000 mobilized in March, and may mobilize another 40,000 to 50,000 replacements between April and August.

The military may even call up women who are of good health, have indicated a desire to serve, or have “army-relevant education,” military spokesman Vladislav Seleznev said this month, although he said the “majority” of those enlisted will serve in support positions rather than combat duty.

The draft announcements have been met with alarm even in the country’s traditionally more nationalistic west.

The draft announcements have been met with alarm even in the country’s traditionally more nationalistic west. Ukrainian outlets have published reports of men fleeing the country en masse to avoid being drafted. In one village in the Ternopil region, 45 men out of the 60 who were to be called up left the country five days beforehand, and all the draft-age men in another village disappeared overnight, regional draft office commissar Andriy Masly told journalists. Of the 14,000 men who were supposed to present themselves at the regional draft office for medical examinations, 7,500 didn’t show up, he said.

Roman said that out of the 36 young men in his home village who were called up, he knows several who are avoiding service. More than 1,300 criminal investigations have been opened against citizens suspected of evading military service, according to the Defense Ministry.

The situation is even stickier in other parts of the country where the population is divided between those who back Kiev and those who sympathize with the pro-Russian rebels. Small anti-mobilization rallies have been held in places like Zaporizhia, which borders Donetsk region and is close to rebel-controlled areas.

Russian media have jumped to cover such protests, and president Vladimir Putin has encouraged the rash of draft dodging, ordering officials to change legislation so that Ukrainian citizens can stay in Russia for longer than the allotted 30 days and won’t “have to return to Ukraine, where they are being caught and sent under the bullets again.” Russia’s Federal Migration Service said at the beginning of February that 20,000 conscription-age Ukrainian men had entered the country in just one week and that a total of 1,193,000 such men were in Russia. (Though traditionally, thousands of Ukrainians have regularly gone to Russia for work.)

The Ukrainian government’s response to reports of draft dodging has been to tighten the screws on civic freedoms. At the end of January, Poroshenko ordered the government to adopt legislation to regulate travel abroad for those eligible for conscription. In February, the armed forces said it would forbid draft-eligible men from leaving their home provinces without permission from the local military commissar.

The moves come just as Ukraine faces increasing scrutiny for its handling of the detained journalist, Kotsaba, who faces treason and espionage charges for recording a video statement in which he called on Ukrainians to resist Kiev’s “illegal” mobilization, and argued that the conflict in eastern Ukraine was a “civil war,” not an “anti-terrorist operation,” as Kiev officially calls it. (Kotsaba was detained for 60 days and, if convicted, could spend at least 15 years in prison.)

Human rights watchers roundly condemned Kotsaba’s detainment, and Amnesty International declared him a prisoner of conscience. But that hasn’t stopped the Ukrainian government from pursuing other measures that would clamp down on freedom of speech when it comes to the fighting: After Kotsaba’s arrest, Anton Geraschenko, an aid to interior minister Arsen Avakov, said he was working with Parliament to introduce legislation making it a crime to publicly call on people to avoid mobilization. On Feb. 7, Geraschenko warned activists planning to hold a picket against mobilization the next day that if they spoke out, each of them would be held for several hours to ascertain their identity, Amnesty International reported.

Valeria Lutkovskaya, Kiev’s official human rights czar, said in a statement on Tuesday that the “persecution of journalists and civic activists for their activities is unacceptable.” Lutkovskaya said she was “fairly confident” that Article 10 of the European Convention on Human Rights, which guarantees the freedom of expression, had been violated.

But Roman is not waiting around to find out. He is searching for work in other countries and plans to emigrate once he does.

“I’m planning to leave country for a time, until this war ends,” he said. “I don’t understand how you can force a person to pick up a gun if he doesn’t want to.” 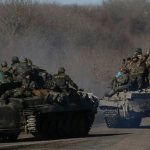