The dawn of an Orwellian future

The U.S. mainstream media continues to spread its own “fake news,” like the falsehood about an intelligence community “consensus” on Russia-gate “hacking,” as algorithms begin to marginalize dissent, reports Robert Parry.

It seems that The New York Times can’t let a good lie lie. Even after being pushed into running an embarrassing correction retracting its false claim that there was a consensus of all 17 U.S. intelligence agencies that Russia hacked Democratic emails and made them public to help Donald Trump defeat Hillary Clinton, the Times is back suggesting exactly that. 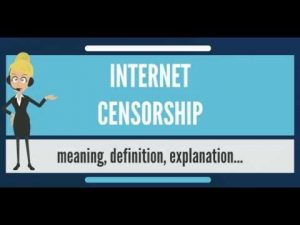 The Times’ current ploy is to say the Russian hacking claims are the “consensus” judgment of the U.S. intelligence community without citing a specific number of agencies. For instance, on Friday, the Times published an article by Matt Flegenheimer about the U.S. Senate vote to prevent President Trump from lifting sanctions on Russia and deployed the misleading phrasing:

“The Trump administration has opposed the sanctions against Russia, arguing that it needs flexibility to pursue a more collaborative diplomacy with a country that, by American intelligence consensus, interfered in last year’s presidential election.”

So, instead of explaining the truth – that the Jan. 6 “Intelligence Community Assessment” was the work of a small group of “hand-picked” analysts from three of the agencies under the watchful eye of then-CIA Director John Brennan and beneath the oversight of then-Director of National Intelligence James Clapper – the Times opts to give its readers the misleading impression that there was a “consensus” within the U.S. intelligence community.

In other words, unless a Times reader knows the truth by having read it at a non-mainstream media outlet such as Consortiumnews.com, that reader would continue to believe that all 17 intelligence agencies were in agreement on this foundational point in the Russia-gate affair.

And the continuation of this willful deception comes as the Times and other mainstream media outlets make progress in their plans to deploy Internet algorithms to hunt down and marginalize what they deem “fake news,” including articles that challenge the mainstream media’s power to control the dominant news narrative.

A report by the World Socialist Web Site found that “in the three months since Internet monopoly Google announced plans to keep users from accessing ‘fake news,’ the global traffic rankings of a broad range of left-wing, progressive, anti-war and democratic rights organizations have fallen significantly.”

Google’s strategy is to downgrade search results for targeted Web sites based on a supposed desire to limit reader access to “low-quality” information, but the targets reportedly include some of the highest-quality alternative news sites on the Internet, such as – according to the report – Consortiumnews.com.

Google sponsors the First Draft Coalition, which was created to counter alleged “fake news” and consists of mainstream news outlets, including the Times and The Washington Post, as well as establishment-approved Web sites, such as Bellingcat, which has a close association with the anti-Russia and pro-NATO Atlantic Council.

This creation of a modern-day Ministry of Truth occurred under the cover of a mainstream-driven hysteria about “fake news” and “Russian propaganda” in the wake of Donald Trump’s election.

Last Thanksgiving Day, the Post ran a front-page article citing accusations from an anonymous Web site, PropOrNot, that identified 200 Web sites — including such Internet stalwarts as Truthdig, Counterpunch and Consortiumnews — as purveyors of “Russian propaganda.”

Apparently, PropOrNot’s standard was to smear any news outlet that questioned the State Department’s Official Narrative on the Ukraine crisis or some other global hot spot, but the Post didn’t offer any actual specifics of what these Web sites had done to earn their place on a McCarthyistic blacklist.

In early May 2017, the Times chimed in with a laudatory article about how sophisticated algorithms could purge the Internet of alleged “fake news” or what the mainstream media deems to be “misinformation.”

As I wrote at the time, “you don’t need a huge amount of imagination to see how this combination of mainstream groupthink and artificial intelligence could create an Orwellian future in which only one side of a story gets told and the other side simply disappears from view.”

After my article appeared, I received a call from an NPR reporter who was planning a segment on this new technology and argued with me about my concerns. However, after I offered a detailed explanation about how I saw this as a classic case of the cure being far worse than the disease, I was not invited onto the NPR program.

Also, as for the relatively small number of willfully produced “fake news” stories, none appear to have traced back to Russia despite extensive efforts by the mainstream U.S. media to make the connection. When the U.S. mainstream media has tracked down a source of “fake news,” it has turned out to be some young entrepreneur trying to make some money by getting lots of clicks.

For instance, on Nov. 26, 2016, as the anti-Russia hysteria was heating up in the weeks following Trump’s election, the Times ran a relatively responsible article revealing how a leading “fake news” Web site was not connected to Russia at all but rather was a profit-making effort by an unemployed Georgian student who was using a Web site in Tbilisi to make money by promoting pro-Trump stories.

The owner of the Web site, 22-year-old Beqa Latsabidse, said he had initially tried to push stories favorable to Hillary Clinton but that proved unprofitable so he switched to publishing anti-Clinton and pro-Trump articles whether true or not.

While creators of intentionally “fake news” and baseless “conspiracy theories” deserve wholehearted condemnation, the idea of giving the Times and a collection of Google-approved news outlets the power to prevent public access to information that challenges equally mindless groupthinks is a chilling and dangerous prospect.

Even if the Russian government did hack the Democratic emails and slip them to WikiLeaks – a charge that both the Kremlin and WikiLeaks deny – there is no claim that those emails were fake. Indeed, all evidence is that they were actual emails and newsworthy to boot.

Meanwhile, U.S. government accusations against the Russian network, RT, have related more to it covering topics that may make the Establishment look bad – such as the Occupy Wall Street protests, fracking for natural gas, and the opinions of third-party presidential candidates – than publishing false stories.

In some cases, State Department officials have even made their own false allegations in attacking RT.

The current Russia-gate frenzy is a particularly scary example of how dubious government conclusions and mainstream media falsehoods can propel the world toward nuclear destruction. The mainstream media’s certainty about Russia’s guilt in the disclosure of Democratic emails is a case in point even when many well-informed experts have expressed serious doubts — though almost always at alternative media sites.

See, for instance, former WMD inspector Scott Ritter’s warning about lessons unlearned from the Iraq debacle or the opinions of U.S. intelligence veterans who have questioned the accuracy of the Jan. 6 report on Russian hacking.

Perhaps these concerns are misplaced and the Jan. 6 report is correct, but the pursuit of truth should not simply be a case of grabbing onto the opinions of some “hand-picked” analysts working for political appointees, such as Brennan and Clapper. Truth should be subjected to rigorous testing against alternative viewpoints and contradictory arguments.

That has been a core principle since the days of the Enlightenment, that truth best emerges from withstanding challenges in the marketplace of ideas. Overturning that age-old truth – by today unleashing algorithms to enforce the Official Narrative – is a much greater threat to an informed electorate and to the health of democracy than the relatively few times when some kid makes up a bogus story to increase his Web traffic.

And, if this new process of marginalizing dissenting views is successful, who will hold The New York Times accountable when it intentionally misleads its readers with deceptive language about the U.S. intelligence community’s “consensus” regarding Russia and the Democratic emails?