The dangerous work of removing land mines in eastern Ukraine 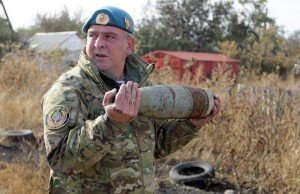 Introductory note by New Cold War.org: The following article provides a superficial glimpse at a lasting tragedy of the civil war brought to eastern Ukraine: the proliferation of planted land mines. Western governments, media and humanitarian agencies have repeated the lies fabricated by the Kyiv regime that shellings and plantings of land mines directed at civilians in eastern Ukraine are the work of leaders of the pro-autonomy rebellion in Donetsk and Lugansk. Perhaps the most absurd example of this was the story put out by Kyiv 15 months ago that rebel forces mined the crash site of Malaysian Airlines Flight 17 in the days following the crash in order to prevent international inspectors from doing their work, welcomed, as they were, by leaders of the rebellion! The foreign minister of Australia ran with that story and it was dutifully picked up by The Guardian on July 30, 2014: MH17: Bishop reacts to claim rebels are laying landmines near crash site.

This website will continue to seek out and publish news articles that tell the full story of the legacy of land mines in eastern Ukraine caused by the civil war regime in Kyiv.

DONETSK (AFP)–Pro-Russian [sic] rebel Konstantin carefully carried an unexploded shell to a hole in the earth under a tree. Laying a charge of TNT, he then blew it up in cloud of black smoke.

After some 18 months, the fighting in east Ukraine has all but ground to a halt as a ceasefire has largely taken hold over the past six weeks, but for Konstantin dangerous work still lies ahead. Going by the name of “Kot” (Tomcat), the 40-year-old works as a de-miner on the separatist [sic] side, trying to defuse the landmines, ordnance and booby traps that are scattered in the countryside.

“You make a mistake and you’re dead,” Konstantin told AFP as he went about his risky work on the conflict-ravaged outskirts of the largest rebel stronghold of Donetsk. “You have to stay concentrated and not let anything distract you.”

Landmines and booby traps have been planted throughout the war zone, around the front line, near trenches in forests and fields and at roadblocks.

“The worst one is the OZM 72 anti-personnel mine tied to taut wires on the ground,” said Konstantin, referring to a Soviet-era weapon. “We find a lot of these. When you touch the wire, the mine springs up 90 centimetres (35 inches) before exploding. This means certain death.”

Along with fighters and mine-clearers, farmers are the main victims of the scattered landmines and booby traps, according to both the Ukrainian authorities and the rebels. Tractors have blown up driving over anti-tank mines and farmers ploughing their fields have stumbled upon landmines concealed in the soil.

“The hardest thing for me is when a shell falls into a house,” said Konstantin, who did not wish to give his last name. “Anyone can blow up a shell to destroy it. But finding a way to neutralise it on the spot without it blowing up is more complicated.”

Locals occasionally discover rocket fragments from the Soviet-era Grad or Uragan multiple rocket-launchers, calling the de-miners onto the scene only to find that the rockets are innocuous.
But not all devices prove to be harmless.

Ukrainian authorities, rebel leaders and the International Committee of the Red Cross have published brochures and broadcast commercials to warn the population of the deadly dangers of mines and shells. A loudspeaker announcement at Donetsk’s central market urges the population to report any suspicious devices.

Ukraine, along with 160 other states, ratified the 1999 Mine Ban Treaty that prohibits the production and use of anti-personnel mines. But both sides have large stockpiles of Soviet-made weaponry — with Kiev saying the rebels received their arms from Russia — and have not hesitated to use them.

“I will have work for a long time to come,” Konstantin said.

The de-miner takes pride in a job he says saves lives but recognises that the high-stress environment can take its toll. “Many mine-clearers drink to relieve stress,” he said. “It’s dangerous. You can’t have unsteady hands in this profession.”

A crest on his uniform — bearing the motto “No margin for error” — serves as a permanent reminder that in this line of work, blunders kill.