The dangerous trend (for the U.S.) of oil payments in non-U.S. currency

Iran wants to recover tens of billions of dollars it is owed by India and other buyers of its oil in euros and is billing new crude sales in euros, too, looking to reduce its dependence on the U.S. dollar following last month’s sanctions relief. 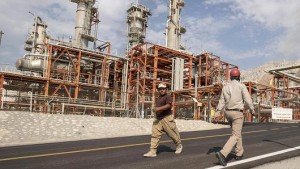 A source at state-owned National Iranian Oil Co (NIOC) told Reuters that Iran will charge in euros for its recently signed oil contracts with firms including French oil and gas major Total, Spanish refiner Cepsa and Litasco, the trading arm of Russia’s Lukoil. “In our invoices we mention a clause that buyers of our oil will have to pay in euros, considering the exchange rate versus the dollar around the time of delivery,” the NIOC source said.

Iran has also told its trading partners who owe it billions of dollars that it wants to be paid in euros rather than U.S. dollars, said the person, who has direct knowledge of the matter.

Iran was allowed to recover some of the funds frozen under U.S.-led sanctions in currencies other than dollars, such as the Omani rial and UAE dhiram.

Switching oil sales to euros makes sense as Europe is now one of Iran’s biggest trading partners. “Many European companies are rushing to Iran for business opportunities, so it makes sense to have revenue in euros,” said Robin Mills, chief executive of Dubai-based Qamar Energy.

Iran has pushed for years to have the euro replace the dollar as the currency for international oil trade. In 2007, Tehran failed to persuade OPEC members to switch away from the dollar, which its then President Mahmoud Ahmadinejad called a “worthless piece of paper”.

The NIOC source said Iran’s central bank instituted a policy while the country was under sanctions over its disputed nuclear programme to carry out foreign trade in euros. “Iran shifted to the euro and cancelled trade in dollars because of political reasons,” the source said.

Saudi Arabia has long trumped Russia in the Chinese oil market. The Saudi share of Chinese crude imports at the beginning of the decade was about 20%, while Russia’s was below seven per cent, according to data cited by RBC Capital Markets. But now the Russians are creeping in — and the Saudis are getting nervous. 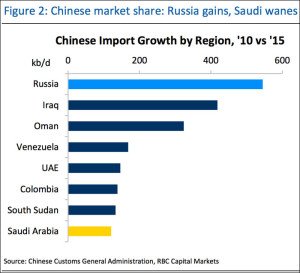 “Russia is the biggest rival to the Saudis in the single-largest oil demand growth country in the world,” RBC Capital Markets’ commodity strategist Michael Tran wrote. “The rising tide of Chinese growth has meant that notional volumes for both countries have increased in the years since, but Russia’s gains have been outsized.”

“The Kingdom now finds itself neck and neck with Moscow for the lead in Chinese market share, with both jostling in the 13-14% range, yet the momentum resides with the latter.”

Notably, the Saudis managed to increase exports to China by only about 120 kilobarrels a day over the past five years — a growth rate that was beaten by seven other countries including South Sudan and Colombia, according to figures cited by Tran. 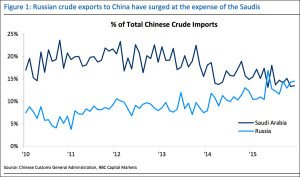 Meanwhile, Russia increased exports by 550 kilobarrels a day in the same period.

Moreover, Tran continued, Russia even managed to overtake the Saudis as the biggest crude exporter to China in December and three other months in 2015. While this detail may not sound particularly impressive, it’s worth pointing out that the Saudis have lost the top spot only six times in the past five years.

Interestingly, part of Russia’s success in China has been attributed to its willingness to accept Chinese yuan denominated currency for its oil (and not, as others have suggested, because of any sort of allegiance to the Sino-Russo friendship).

On the flip side, “Saudi Arabia is losing its crown as its selling prices in Asia haven’t been attractive enough,” Gao Jian, an analyst at SCI International, a Shandong-based energy consultant, told Bloomberg back in June.

“If Saudi Arabia wants to recapture its number one ranking, it needs to accept the renminbi for oil payments instead of just the dollar,” Gordon Kwan, the Hong Kong-based head of regional oil and gas research at Nomura Holdings Inc., told Bloomberg in June.

There are certainly other things the Saudis could theoretically do to capture market share. “Owning refineries in key demand regions guarantees market captivity,” Tran wrote. “This has historically been part of the Saudi playbook and the recent reported interest in acquiring stakes in Chinese refineries is a strategic move that would guarantee the Kingdom a seat at the table in the preeminent region for demand growth.” Basically, if the Saudis own the refineries, then their oil will be sold there.

In any case, the upshot for the overall oil market is that we probably won’t see Russian-Saudi coordination in the oil sector anytime soon, Tran argued. “The recent meeting between the Russian government and its domestic oil company execs introduces a glimmer of promise for potential coordination with the Saudis and other OPEC countries, but the probability of a production cut remains low,” he wrote.

In sum, Russia has moved into China — and the Saudis aren’t loving it. “Is there a sense of urgency from the Saudis?” Tran said. “You bet.”

* China’s currency on track to challenge the U.S. dollar in oil markets, by Matt Piotrowski, The FUSE, Oct 15, 2015

The U.S. dollar has been the de-facto international reserve currency for seven decades, but its supremacy is being challenged rapidly. China’s forthcoming launch of a crude futures contract to be traded with the yuan is another major step to cement itself as a global economic powerhouse and challenge the U.S. currency’s dominance in oil markets.

While China has a long road to travel if it wishes to unseat the dollar, the Asian juggernaut has taken a number of steps to boost its currency’s standing in the global marketplace, but the move to establish a crude futures exchange is among the most significant…

SINGAPORE – The launch of China’s crude oil futures is likely to be delayed, possibly until the second quarter of 2016, as authorities take a fresh look at crude grades included for delivery into the contract, while they step up efforts to ensure plentiful storage for participants, sources close to developments told Platts this week…

Excerpt:
Crude oil is priced in dollars because the U.S. dollar remains the world’s reserve currency and will likely remain so for the foreseeable future. Because the dollar is so widely available across the globe, it is the standard currency of international trade. In fact, 60% of all currency reserves across the globe are held in U.S. dollars, and the Euro comes in at a distant 25%.

Should it remain so in the future is a different question. If you ask Russia, China, Iran or the BRICS Countries, they may say that an alternative is needed, but there are no credible alternate currencies that come close to the USD as the reserve currency. Euro was trying to get there until it blew up. The Chinese Yuan (Renminbi) is not a freely traded currency and won’t be so anytime soon.

Until a credible alternate emerges, the USD will remain the lingua franca of international trade.