At a kindergarten in “DPR”-controlled Dokuchaievsk (32km south-west of Donetsk), the SMM noted some broken windows and shrapnel grooves on a west-facing exterior wall. Inside, it noted some damaged furniture and equipment. The SMM observed no crater impacts.

In “DPR”-controlled Svobodne (49km north-east of Mariupol), the SMM noted 15 shell impacts, assessed to have been caused by 120mm artillery rounds fired from the west. The SMM observed three destroyed houses, which it assessed to have sustained direct hits. A number of other houses had sustained damage. According to “DPR” armed personnel and residents of the village, an elderly woman and her adult son were killed in the shelling. The SMM observed a destroyed house where residents said the victims had lived. Human remains and blood were at the scene. The shelling occurred between 04:10 and 04:50hrs on 7 July, according to residents in neighbouring “DPR”-controlled Telmanove (50km north-east of Mariupol). In “DPR”-controlled Starobesheve (81km north-north-east of Mariupol), the head doctor of the hospital later told the SMM that two civilians killed in Svobodne had been taken to the morgue, which is attached to the hospital.

In nearby Telmanove, the SMM noted six shell impacts in a 75 by 300m rectangular area. The SMM noted shrapnel damage to and broken windows in numerous apartment blocks; a direct impact on the roof of a coal heating plant, one of whose walls had partially collapsed;  a hole in the roof of the maternity ward in the local hospital; shell craters in the yard of a kindergarten, whose walls sustained shrapnel damage and whose windows were mostly shattered; a shell crater on the main street in the village with shrapnel damaging an overhead gas pipeline, fences and homes; and, a large crater in a yard. The SMM assessed that the damage was caused by 152mm artillery shells fired from the west-south-west. In the grounds of the hospital, the SMM noted two new military-type trucks with a cable running from each of them into the hospital. On the roof of a nearby concrete grain silo, the SMM saw radio antennas and repeaters. On the far end of the street, the SMM noted cement blocks cutting off access. According to local inhabitants, the shelling – which occurred between 05:00 and 05:25hrs on 7 July – resulted in a 14-year-old girl sustaining leg injuries.

In “DPR”-controlled Sakhanka (24km east of Mariupol), residents told the SMM of hearing 60 explosions in the direction of nearby Dzerzhynske (25km east-north-east of Mariupol) between 04:30 and 05:30hrs on 7 July. In Dzerzhynske, the SMM observed a small crater caused by an 82mm mortar round in front of a house, which had sustained shrapnel damage to its front wall and windows. At the back of the house, the SMM observed two large craters, which it assessed to have been caused by artillery rounds. At a dis-used boarding school for mentally disabled children, the SMM observed that shrapnel from an airburst had damaged the windows and walls. The SMM observed that a chicken coup in the yard of a house had been completely destroyed by a direct hit. The SMM assessed that all rounds were fired from the north-west. No injuries were sustained, according to residents. 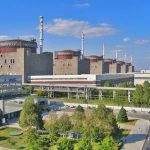 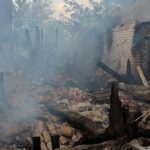