The coup that is taking place in Peru 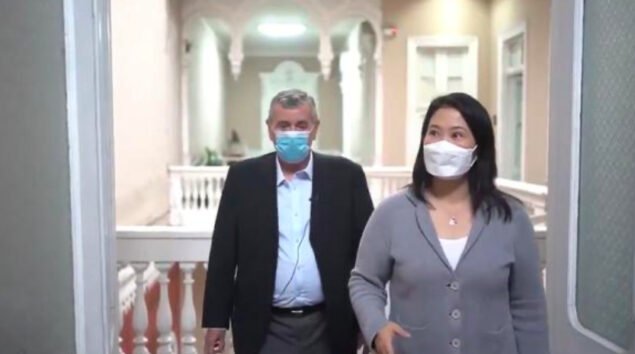 While by all accounts, Pedro Castillo won the second round presidential elections, his adversary has refused to concede, and many fear that tensions could escalate with the help of Peru’s loyal right and the newly appointed US ambassador.

Pedro Castillo of the Perú Libre party has already begun to receive congratulations from around the world. It is beyond doubt that he won the June 6 presidential election. The Peruvian Electoral Authority – ONPE – announced the final results: Castillo won 50.137% of the vote (8.83 million votes), while his opponent in the second round Keiko Fujimori of Fuerza Popular won 49.893% (8.78 million votes). This is with 100% of the votes. By all accounts, Fujimori has lost the election.

However, Fujimori – the candidate of the right – has refused to concede. In fact, she has hired the very best of Peru’s legal minds to challenge the election results. Within hours of the election tallies being available, Fujimori’s team filed 134 challenges within the window of opportunity; they have another 811 challenges in hand. Anyone who knows the Peruvian legal fraternity will realize that some of the most important names are on the Fujimori roster: Echecopar; Gersi; Miranda & Amado; Payet, Rey, Cauvi, Pérez; Rodrigo, Elías & Medrano; Rubio Leguía Normand; Rebaza, Alcázar & De las Casas. In Lima alone, the team had over thirty lawyers at work. The Fujimori team had assembled these lawyers before the vote, anticipating the possibility of a Castillo victory and the need to tie him up in the courts. The white collar legal army put in place a racist lawfare strategy; their entire game has been to invalidate the votes that are at the core of Castillo’s support base, namely the Indigenous communities of Peru.

The United States appointed a new ambassador to Peru. Her name is Lisa Kenna, a former advisor to US Secretary of State Mike Pompeo, a nine-year veteran at the Central Intelligence Agency (CIA), and a US Secretary of State official in Iraq. Just before the election, Ambassador Kenna released a video, in which she spoke of the close ties between the US and Peru and of the need for a peaceful transition from one president to another. The “presidential transition sets an example for the whole region,” she said, as if anticipating a serious challenge. If anyone would know about interference in the electoral process in Latin America, it would be the United States.

It would also be key members inside the team of Keiko Fujimori, such as Fernando Rospigliosi. Rospigliosi, a former interior minister under President Alejandro Toledo, joined the Fujimori team for just this kind of contest (for years, Rospigliosi had been very critical of the crimes committed by Fujimori’s father, President Alberto Fujimori, who is now serving a prison sentence). Working with the US embassy is on the resume of Rospigliosi. In 2005, the former left-leaning military officer Ollanta Humala was set to enter the presidential race in April 2006. Every indication suggested that Humala, who had attempted a coup against Keiko Fujimori’s father President Alberto Fujimori in 2000, had mass support. Some even thought that Humala would follow both Hugo Chávez and Evo Morales to draw Peru leftwards. In that period, Rospigliosi went to the US embassy to seek support in preventing a Humala victory in 2006.

On 18 November 2005, Rospigliosi and ex-Director of National Defense Ruben Vargas came to the embassy for lunch. They offered their “concern over prospects that ultranationalist Ollanta Humala is establishing himself as a political force to be reckoned with.” Rospigliosi and Vargos both worked for an NGO called Capital Humano y Social (CHS), which was under contract with the US government’s Law Enforcement and Narcotics Affairs Section (NAS). Both Rospigliosi and Vargas asked the US embassy to urge their communications contractor Nexum to “monitor coverage of Humala and promote anti-Humala news and commentary in the coca regions.” They wanted the US embassy to use its considerable resources to undermine Humala. This is old fashioned dirty tricks.

The US was worried about Humala, about his statements against the US military presence in Peru and his ties to Hugo Chávez. What Rospigliosi and Vargas said to the US embassy pleased them. Humala lost the election in 2006. He would win in 2011, beating Keiko Fujimori; but by 2011, Humala had estalished himself as a candidate of the neoliberals, someone that the US saw as harmless and useful. On 19 May 2011, Humala signed a text that yoked him to the neoliberal agenda (“Compromiso en Defensa de la Democracia”). At the gathering, he was blessed by Peru’s right-wing godfather, the novelist Mario Vargas Llosa.

Vargas Llosa is a key figure here, using the prestige of his 2010 Nobel Prize for literature as weight. As results came in that Pedro Castillo has swept rural Peru, Vargas Llosa disparaged voters in the rural areas; he warned that Peru would become like Venezuela and that it would a catastrophe for Peru. Marinated in the bile of racism, Vargas Llosa joined other intellectuals of the extreme right to belittle the Peruvian working-class and peasantry, hoping that such remarks would give sufficient cover to the coup process underway inside the ONPE.

Everything seems prepared: the US ambassador with CIA credentials, a dirty tricks man with a habit of going to the embassy for help and with a record of asking the US to malign the left, a grand old man with an allergy to his own people, and a candidate whose father was backed by the oligarchy when he conducted a self-coup in 1992.

Pedro Castillo continues to hold the streets. The crowds will gather. They do not want their election to be stolen. But there is fear in Peru. Darker forces swirl about. Will the people be able to defeat them?

Vijay Prashad is Chief Correspondent at Globetrotter, Director of Tricontinental: Institute for Social Research, and Chief Editor at LeftWord Books. His most recent book is Washington Bullets, with a foreword by Evo Morales Ayma.