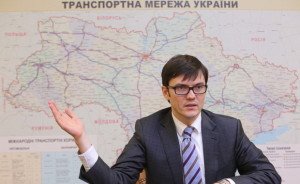 The Ministry of Infrastructure’s bloated portfolio of almost 300 state-owned enterprises — including a railroad, seaports and roads — funnel cash to corrupt businessmen with connections to Ukraine’s parliament, he says. For months, they have blocked his attempts to privatize them.

“This is an existential issue for the deputies,” meaning members of parliament, Pyvovarsky said in an interview this month. “If the state-owned companies suddenly disappear, if they’re privately owned, then what’s in it for them? They cannot skim from those companies anymore.” [On Dec 11, 2015, Andriy Pyvovarskiy announced his resignation as minister of infrastructure overseeing Ukraine’s railways, ports, airlines, roads and postal service. See his resignation letter below.]

Crony capitalism was a major reason protesters toppled the pro-Russian government of President Viktor Yanukovych in 2014. After two years of a pro-Western, pro-reform government, corruption is once again fueling political crisis in Kiev. At stake are billions of dollars, much of it siphoned from state-owned enterprises, and interests that allegedly extend to Ukraine’s leadership, including business circles close to both President Petro Poroshenko and Prime Minister Arseniy Yatsenyuk.

The technocrats who entered the government to help implement ­Western-backed reforms are losing faith. Pyvovarsky was one of several reform-minded ministers to resign this month after the economy minister, Aivaras Abromavicius, said that a close friend and political ally of Poroshenko had tried to force him to hire a deputy to manage Naftogaz, the state-owned oil giant, and other potentially lucrative companies.

Abromavicius, in an acerbic resignation letter, identified the ally as Ihor Kononenko. Journalists already had dubbed him the party’s “gray cardinal,” and Ukraine’s leadership appeared shaken by the scandal. Seeing a “window of opportunity,” Pyvovarsky returned to the government in a last-ditch effort to carry out his agenda, saying that he either would see parliament pass key reforms or he would quit for good. The result? More of the same.

“I’m not holding onto this table. I don’t want to be minister,” Pyvovarsky said. “It’s a matter of a couple of days. I’m not going to wait for six months. Or one month. I don’t trust them. I do not trust them.” 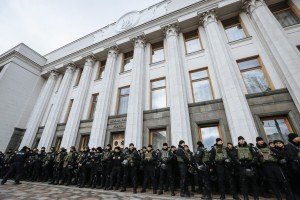 Ukraine’s parliament is unraveling by the day, and the government is more concerned about survival than passing measures to bring about broad changes. On Feb. 16, Yatsenyuk’s government narrowly survived a vote of no confidence, saved by lawmakers in Poroshenko’s party and those loyal to several oligarchs who mysteriously disappeared from parliament during the vote. Later, two of four political parties left the ruling coalition, setting up the probable return of the populist [sic] Radical Party as a junior partner.

Early elections are likely. Average Ukrainians are fed up. There have been some successes in the reform process, such as a new police force and decentralization, but the economy contracted 10.5 percent and inflation rose more than 40 percent in 2015. Political parties are thinking about positioning themselves for elections, said Balazs Jarabik, an analyst at the Carnegie Center, “not sound policy and reform-making in the parliament.”

Western governments want Ukraine to push forward with reforms but have rejected radical change to unblock Ukraine’s parliament, warning that new elections would plunge the country deeper into political crisis.

The West’s influence on the government in Kiev cannot be overstated. Ukraine needs Western financial support, including the remainder of a $17.5 billion International Monetary Fund bailout, to prop up its economy. IMF head Christine Lagarde threatened this month to cut off aid “without a substantial new effort to invigorate governance reforms and fight corruption.”

On the other hand, dismissing the government without a replacement also would risk the IMF bailout and would be like “jumping out of a plane without a parachute,” said one Western diplomat, who spoke on the condition of anonymity to discuss the situation candidly.

Poroshenko’s critics say he has played a double game: pandering to angry voters by publicly calling for Yatsenyuk to step down but privately scuttling the no-confidence vote to prevent new elections or the loss of Western aid. The diplomat, citing private channels of communication, said that he had “clear indications that Poroshenko was not going to allow” the government to fall.

Poroshenko’s main concession on reform was firing Prosecutor General Viktor Shokin, another ally who has been accused of blocking reforms and prosecutions against corrupt businessmen. Perhaps the most troubled of Ukraine’s institutions, the prosecutor general’s office is trusted by less than 10 percent of the population.

“The decision is correct but it’s late,” said Vitaly Kasko, a respected deputy prosecutor general who also resigned recently, citing personal interference by Shokin. He has said he was pressured and refused to accept instructions from Kononenko, the friend of the president. In his resignation, Kasko wrote that the prosecutor general’s office was a “dead institution, the independence of which nobody believes in.” He said that despite Shokin’s dismissal, he had no plans to return to work there.

Abromavicius, the minister of economy whose resignation triggered the crisis, said he welcomed the new scrutiny that the scandal has brought, including a code of ethics for public officials introduced by the cabinet.

“It is not too late to say goodbye to friends in politics,” he said, adding that Poroshenko and Yatsenyuk had an opportunity to restore trust in the government. “If the government collapses, it is not because of us. It is because of the things that were being done in the wrong way.”

President Obama has extended for another year U.S. sanctions imposed on Russia over its military intervention in Ukraine, according to a White House statement…

This is goodbye but not farewell. Exhausted but hopeful, I am stepping down from the post of minister of infrastructure. Together with my team, we have dismantled the old post-Soviet system and laid a solid basis for further development of Ukraine’s infrastructure. These changes are irreversible and I am proud of the legacy we leave behind.

A year ago, I enthusiastically gave up a successful career in order to serve my country in its time of need. I assumed the role of minister of infrastructure thinking I knew what I had signed up for. Unfortunately, I was wrong.

The Ministry of Infrastructure I took leadership of 12 months ago was a nightmare.

In early 2015, I had to practically beg for a loan to buy fuel for the only railway network operator in the country so that it could keep functioning.

And my personal horror story – the old generation of employees in the ministry could simply “forget” to follow my instructions and not face any adverse consequences. As a person who came from business, every time I encountered such ridiculous situations I couldn’t believe it was for real.

I believe that the Ministry of Infrastructure of Ukraine – in charge of sky, water, earth, plus the post office – has managed to implement many changes during this year, of course, not as many as I had hoped.

Transit through Ukraine is gradually becoming much faster and easier. Namely, the Ministry of Infrastructure has reduced the number of permits, licenses and certifications. The results can already be seen in Ukrainian ports – it used to take several days to obtain clearance, now it takes 30 minutes at most.

In 2015, we corporatized Ukrzaliznytsia and implemented transparent centralized procurement procedures. As a result, there is a new top management in Ukrzaliznytsia, involving specialists from Germany, more than Hr 500 million has been saved on procurement, and more than Hr 3 billion of the company’s own available funds have been channeled for repair works and capital investments. This will result in improved transport infrastructure, benefiting business owners and passengers.

Roads in Ukraine are also moving towards European standards.

The Ministry of Infrastructure launched reform of the state roads operator Ukravtodor to destroy its monopoly and introduce open, competitive market practices. We have also implemented a ban on overloaded trucks that damage roads faster than other vehicles. Besides, due to budget decentralization, more funds will be efficiently allocated for renovation and maintenance of local roads.

These are a few examples of our reforms that pave the way for better practices in Ukraine’s infrastructure sphere. And if someone does try to reverse these changes, I know I can count on the people of Ukraine to defend the gains we have made.

During 2015, my team introduced a number of instruments to help civil society monitor government officials.

We have disclosed more information in 2015 than had been disclosed for the past 23 years. We have opened information about public procurement, started to broadcast tenders online as well as publish budgets of state enterprises, plans of repairing of roads and expenses over the last five years.

And now, in this critical time for the country, I welcome and strongly encourage using these tools to maintain accountability of public servants.

Change is a collective effort. Everything I accomplished in the position was possible only due to the team of professionals who came with me to the ministry.

We devoted one year of our lives, working basically for free, to realize hopes of those who gave their lives on the Maydan (during the EuroMaidan Revolution) and in the Donbas.

Now it is the turn of another generation of young educated professionals to continue this work. With this in mind, I urge the authorities of Ukraine to speed up a full-scale reform of public administration in order to attract and retain talented managers with strong values.

I am leaving my position filled with faith in Ukraine and with overwhelming gratitude for those who stood by my side during good days and bad – the members of my team, the Ukrainian public, and the experts who came from all over the world to share their experience to begin to reform the Ministry of Infrastructure of Ukraine. 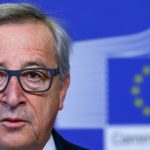 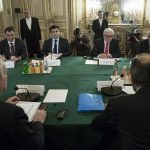