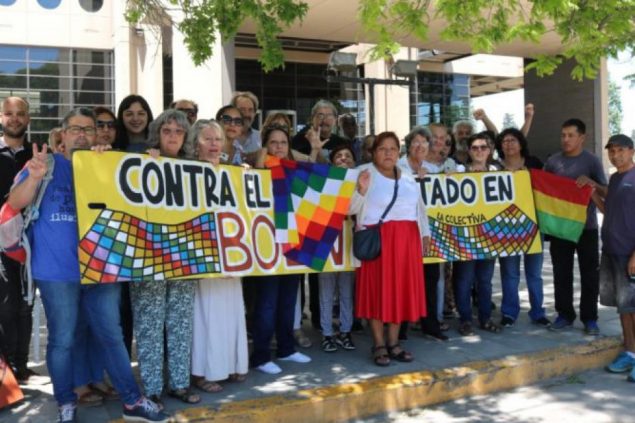 The first complaint filed in federal courts in Argentina for crimes against humanity in Bolivia is progressing with the Committee of Solidarity with the Latin American Peoples presenting a complaint against the current de facto government.

The first complaint filed in federal courts in Argentina for crimes against humanity in Bolivia is progressing. On Friday, November 29, the Committee of Solidarity with the Latin American Peoples presented a complaint against the current de facto government in the city of Córdoba. It denounced a systematic plan of human rights violations in the highland country, and demanded convictions for crimes committed under the auspices of the State. Although there are still no formal responses from the courts, the Committee (composed of various social organizations, trade unions and human rights collectives) is keeping the cause active by incorporating evidence such as the denunciation of the Legislative Assembly of Bolivia before the Inter-American Commission on Human Rights. Now, the collective is calling for a “solidarity signature” this Thursday at 10 a.m. at the Cordoba headquarters of the Courts to add social organizations to the complaint.

In the denunciation, the Committee does not hesitate to name those responsible for crimes against humanity committed in Bolivia since October 20, election day: the list includes “the current President Self-proclaimed Senator for the opposition Jeanine Añez, her ministers of the Presidency Jerjes Justiniano, of Government Arturo Murillo, of Communication Roxana Lizárraga, of Defense Fernando López, of Justice Alvaro Coimbra, the opposition leaders Luis Fernando Camacho and Carlos Mesa, together with the leaders of the Armed Forces Commander Carlos Orellana Centellas and his predecessor Williams Kaliman, and of the Bolivian National Police, Vladimir Calderón and his successor”.

All of them participated in the planning and execution of the coup d’état, according to the complaint presented by lawyer Rafael Ortiz on behalf of the Committee. Through this organized plan to overthrow the president and vice-president elected until January 22, 2020, Evo Morales and Alvaro García Linera, “diverse acts of generalized and systematic terror” were practiced against the legitimately elected and exercising authorities.

Among these acts, they mention the persecution of MAS supporters to eliminate their political and institutional participation through “torture, public humiliation, arson (such as the headquarters of the Six Cocacolera Federations of the Chapare Tropics and the MAS), looting of homes (such as that of the current president of the city of Cochabamba) and public places (burning of polling stations), kidnapping of relatives and coercion affecting their physical integrity to impose the resignation of officials (such as the sister of the incumbent President, Esther Morales Ayma ), the public humiliation of the mayoress of the city of Vinto, Cochabamba, Patricia Arce on November 7, as well as the burning and trampling of indigenous symbols such as the Wiphala.

It was the self-proclaimed government minister himself, Arturo Murillo, who legitimized this action by declaring that the hunt for MAS representatives was beginning and that they should start “running”. Murillo dangerously opened the door to the “indiscriminate and illegal use of weapons of war by paramilitary groups and the combined forces of the Armed Forces and the Police,” the Committee denounced.

The plan designed for the illegal seizure of power included “impunity for the security forces responsible for the massacres of dozens of civilians and the wounding of hundreds of them, through Decree 4078” which prevents the military forces from being held responsible for these illegal acts against humanity. The complaint mentions in the same line the decree that grants the sum of five million dollars for equipment and weapons to the security forces.

The human rights collective also refers to media coverage of the conflict. In this regard, it considers that the repression of the right of indigenous peoples and peasants to demonstrate is brutal and the local press are not showing this reality. With the same purposes, they designed the persecution, the censorship, the attack of media such as Bolivia TV and the radio station Radio Patria Nueva, Abia Yala TV, as a result of which some local journalists were subjected to public humiliation by tying them to trees, as happened to José Aramayo of Prensa Rural. Sebastián Moro, who died on November 16 under dubious circumstances.

The balance of the repressive action orchestrated and legitimized by the de facto government includes “the murder of 34 people, more than a thousand wounded, more than a thousand illegally detained and dozens of people isolated in Embassies without safe conduct to go into exile. In the Committee’s view, the conduct of the defendants falls within the criminal categories of repeated attempts to commit aggravated homicide, torture, unlawful deprivation of liberty, aggravated coercion and arson.

In order to demand the conviction of those guilty of crimes against humanity, the group resorted to rulings such as that of October 30, 2014, which judged crimes of the Franco regime in Argentina. Both this case and that of the present denunciation fall within the “cases foreseen in international agreements to which the Argentine Republic is a party,” such as the UN Universal Declaration of Human Rights.

“The Solidarity Committee was formed as a result of the convening of the Working Group for Human Rights in Córdoba. The Roundtable is a space for coordination between organizations such as H.I.J.O.S., Grandmothers, Relatives of Disappeared and Detained for Political Reasons, unions and social organizations,” stresses Virginia Carranza, History professor and Undersecretary of the Extension Secretariat of the Faculty of Philosophy and Humanities of the National University of Córdoba (UNC).

Carranza has been working in the coordination of the Committee. Regarding the decision to file a complaint against the de facto government of Bolivia, she explains in a conversation with Página/12 that this responds to the “sediment of social and political learning that our history has given us. If there is a strength in our democracy and political culture, it is to have sustained, not without effort and not without adversity of all kinds, the processes of Justice”.

The UNC professor admits that they decided to present the denunciation “taking the example of the trial of Franco’s crimes in Argentina. We understand that Memory and Truth are the necessary pillars for the construction of peoples.

In relation to the continuity of the cause, Carranza affirms that “evidence was added the following week to the presentation of the denunciation and more plaintiffs will be added. The only thing the justice system has done so far is to receive the complaint and establish it. Now the judicial process begins, which will continue until February. That is why we wanted to carry out this political act on Thursday in the courts of Córdoba, to keep the flame of the denunciation alive. 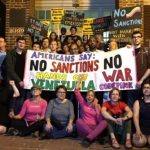 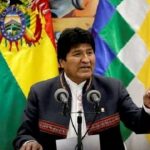