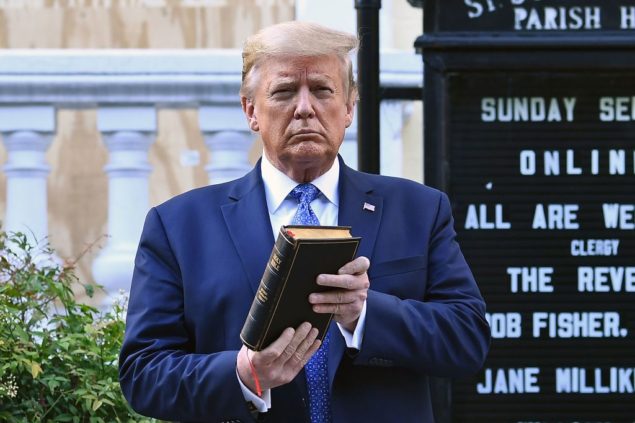 Trump’s election solves some problems for the church, but given the man’s character, it creates others. Political power is not a moral disinfectant.

Others will stand with Trump because he is the only candidate who isn’t aligned with those who’d defund the police. They’ll stand with Trump because he has been arguably the most pro-life President. They’ll stand with Trump because his Administration declared a truce in the Obama Administration’s war against churches. Lest any of you forget, and if you are in the media and reading this you might not have ever noticed, President Obama’s administration actually argued there is not a freedom to exercise one’s religion. Instead, his administration argued there was only a freedom of worship. The Supreme Court rejected his position 9-0, but the administration’s antagonism toward faith-based voters continued. Obama’s Solicitor General argued faith-based institutions could see their tax-exempt status go away if they did not embrace gay marriage. Then they went after Hobby Lobby and the Little Sisters of the Poor to demand they fund murdering children.

You want to understand why so many evangelicals are loyal to President Trump? That is why. They expected Clinton would deliver even more and now presume Biden, as the Democrats go further left, will do the same with gusto.

But I have to say something to my evangelical friends — Donald Trump will not save you. He cannot save you. In the rhetoric, tone, tenor, and levels of support for President Trump, I am struck by how many people still view him as some defense against the left.

If you are a Christian voting for Donald Trump because he is pro-life, not at war with Christians through public policy, has great judicial picks, and will defend the police, I’m with you.

But I continue to harbor a great belief that too many Christians are using Trump as a political savior for a spiritual problem both in their own lives and in the life of this country. Trump cannot stop the culture from turning against the faith and, if anything, more and more data shows Trump is a catalyst for the cultural turn. He is increasing the left’s turn against the faith at a more rapid pace as so many evangelical leaders constantly beclown themselves to hump his leg. He is also increasing the right’s turn against the faith at a more rapid pace as more political apparatchiks on the right do what is expedient for political victory, including tossing grace, truth, and love for neighbors to the wind.

In The Benedict Option, which was published a couple of months into Trump’s presidency, I wrote:

Besides, fair or not, conservative Christianity will be associated with Trump for the next few years, and no doubt beyond. If conservative church leaders aren’t extraordinarily careful in how they manage their public relationship to the Trump phenomenon, anti-Trump blowback will do severe damage to the church’s reputation. Trump’s election solves some problems for the church, but given the man’s character, it creates others. Political power is not a moral disinfectant.

And this brings us to the more subtle but potentially more devastating effects of this unexpected GOP election victory. There is first the temptation to worship power, and to compromise one’s soul to maintain access to it. There are many ways to burn a pinch of incense to Caesar, and some prominent pro-Trump Christians arguably crossed that line during the campaign season. Again, political victory does not vitiate the vice of hypocrisy.

There is also the danger of Christians falling back into complacency. No administration in Washington, no matter how ostensibly pro-Christian, is capable of stopping cultural trends toward desacralization and fragmentation that have been building for centuries. To expect any different is to make a false idol of politics.

What’s more, to believe that the threat to the church’s integrity and witness has passed because Hillary Clinton lost the 2016 presidential election is the height of folly.

One reason the contemporary church is in so much trouble is that religious conservatives of the last generation mistakenly believed they could focus on politics, and the culture would take care of itself. For the past thirty years or so, many of us believed that we could turn back the tide of aggressive 1960s liberalism by voting for conservative Republicans. White Evangelicals and Catholic “Reagan Democrats” came together to support GOP candidates who vowed to back socially conservative legislation and to nominate conservative justices to the U.S. Supreme Court.

The results were decidedly mixed on the legislative and judicial fronts, but the verdict on the overall political strategy is clear: we failed. Fundamental abortion rights remain solidly in place, and Gallup poll numbers from the Roe v. Wade era until today have not meaningfully changed. The traditional marriage and family model has been protected in neither law nor custom, and because of that, courts are poised to impose dramatic rollbacks of religious liberty for the sake of antidiscrimination.

Again, the new Trump administration may be able to block or at least slow these moves with its judicial appointments, but this is small consolation. Will the law as written by a conservative legislature and interpreted by conservative judges overwrite the law of the human heart? No, it will not. Politics is no substitute for personal holiness. The best that orthodox Christians today can hope for from politics is that it can open a space for the church to do the work of charity, culture building, and conversion.

To be sure, Christians cannot afford to vacate the public square entirely. The church must not shrink from its responsibility to pray for political leaders and to speak prophetically to them. Christian concern does not end with fighting abortion and with protecting religious liberty and the traditional family. For example, the new populism on the right may give traditionalist Christians the opportunity to shape a new GOP that on economic issues is about solidarity more with Main Street than Wall Street. Conservative Christians can and should continue working with liberals to fight sex trafficking, poverty, AIDS, and the like.

The real question facing us is not whether to quit politics entirely, but how to exercise political power prudently, especially in an unstable political culture. When is it cowardly not to cooperate with secular politicians out of an exaggerated fear of impurity—and when is it corrupting to be complicit? Donald Trump tore up the political rule book in every way. Faithful conservative Christians cannot rely unreflectively on habits learned over the past thirty years of political engagement. The times require much more wisdom and subtlety for those believers entering the political fray.

Above all, though, they require attention to the local church and community, which doesn’t flourish or fail based primarily on what happens in Washington. And the times require an acute appreciation of the fragility of what can be accomplished through partisan politics. Republicans won’t always rule Washington, after all, and the Republicans who are ruling it now may be more adversarial to the work of the church than many gullible Christians think.

Read it all. I’m serious. There is nothing left for us but taking the Benedict Option, which is to say, turning inward to build (rebuild) our spiritual houses, and cultivate not passion for “issues,” but disciplines of prayer, catechesis, and cultivating a willingness to suffer for our faith. I expect that a number of congregations will be seized by a spirit of wokeness commensurate to how other congregations were seized by a spirit of #MAGA. It’s all a false idol. All of it. The path out of this dark wood leads through pain and suffering. There’s no doubt about it. The church is not the Republican Party (or the Democratic Party) at prayer — and to the extent that it is, it deserves to die.

If your faith is so weak that you would leave Christianity over your church’s submission to Trump (or to wokeness), then that’s on you, not the church. But it is also true that the church shouldn’t make it easy for those who are weak in the faith, or struggling with faith, to throw it all away in disgust. Trust me, I’ve been there, and there is nothing more useless, and even antagonizing, in the face of that kind of struggle than Christians who say, “Suck it up, buttercup.”

Even if Trump is re-elected, don’t be deceived: we are in the twilight of Trumpism. He is a spent force. There’s a report that White House advisers are considering having the president give a speech to the nation on racial unity. The only passions such a pre-discredited speech would inspire would be anger and mockery. Events of this spring and early summer have emasculated him — that, and the fact that he wasted his presidency tweeting, making a fool of himself, and demeaning the stature of his office. It’s over. Even if the Democrats somehow snatch defeat from the jaws of victory, and America gets four more years of Trump, it’s over. As Erick Erickson points out, not only has Trump done little to stop the forces tearing the church apart in post-Christian America, he has actually accelerated them. To be fair, no politician could have stopped those forces, because they are spiritual and cultural forces, not primarily political ones. Still, he really has hastened the reckoning for believers, in part by anesthetizing a lot of them about the nature and severity of the crisis.

Saw this the other day on Twitter, and said, yep, she’s right:

My greatest concern for the evangelical church right now is that we've wasted years chasing issues. Years we should have spent cultivating virtue.

We are radically unprepared for this moment.

It’s not just the Evangelical church. All the churches — and that also means conservative churches and liberal churches — who have substituted and continue to substitute chasing issues for cultivating holiness, and the practices of holiness, are going to fall. You cannot vote, or demonstrate, or emote your way out of this Reckoning.

Christians who haven’t been making plans for the aftermath had better get started.

Rod Dreher is a senior editor at The American Conservative. He has written and edited for the New York Post, The Dallas Morning News, National Review, the South Florida Sun-Sentinel, the Washington Times, and the Baton Rouge Advocate. Rod’s commentary has been published in The Wall Street Journal, Commentary, the Weekly Standard, Beliefnet, and Real Simple, among other publications, and he has appeared on NPR, ABC News, CNN, Fox News, MSNBC, and the BBC. He lives in Baton Rouge, Louisiana, with his wife Julie and their three children. He has also written four books, The Little Way of Ruthie Leming, Crunchy Cons, How Dante Can Save Your Life, and The Benedict Option.

Expel the enemy from within: cops out of our unions and hospitalsJustice, USA 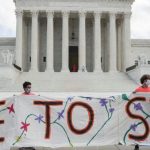