The U.S. is empire is in a state of crisis, creating chaos around the world and contradicting its own goals.

The United States is an empire. It has 800 military bases around the world . More than $840 billion has been set aside for the latest Pentagon budget, a sum bigger than the military expenditure of the next nine countries combined. U.S. military operations, whether overt or covert, have devastated more than eighty countries since the end of World War II and killed more than 30 million people. And these numbers are likely undercounts since the U.S. national security state is far from transparent.

The American Empire is protected by a series of lies otherwise known as the ideology of American exceptionalism. American exceptionalism has normalized imperialist violence by rendering it nothing more than a crusade for “democracy,” “liberty,” and “freedom.” Innocence is bestowed upon the American empire through the creation of “enemies” and scapegoats. Brutal crimes against humanity such as torture were sanctioned by the threat of “terrorism” that the U.S. created in Afghanistan beginning in 1979. Military encirclement and sanctions have since been justified by a never-ending quest to defeat “authoritarianism,” communism, and other threats to the so-called “rules-based international order.”

The deeper the world moves into the 21st century, the clearer it becomes that the American Empire has bitten off more than it can chew. U.S capitalism is in decline and its economic influence over the world is shrinking by the decade. The “end of history” declared after the fall of the Soviet Union is being challenged by the rise of China’s modern socialist economy and the pursuit of sovereign governance in Latin America, Africa, and Asia. The American Empire offers neither investment nor prosperity. China and Russia are leading a multipolar world where peace, stability, and prosperity for the vast majority of humanity is prioritized over the narrow interests of U.S. hegemony.

The American Empire has responded with a violent campaign to suffocate multipolarity in its crib. Warmongering servants of the duopoly have ripped off whatever clothes remained to conceal its violent interests from the masses of people. On July 12th, former Trump national security advisor John Bolton told CNN that he personally “planned coups,” making him an expert judge on the January 6th 2020 incident on the Capitol. When pressed by Jake Tapper, Bolton responded that he would not go into specifics. He did mention that his memoir included information about the role he played in facilitating a crisis in Venezuela to remove President Nicholas Maduro from power.

Of course, Bolton is a known neocon hawk who has published many op-eds calling for the bombing of Iran and other acts of war and aggression. But warmongering isn’t reserved for the most hawkish elements of the GOP-side of the duopoly. President Joe Biden has demonstrated a willingness to publicly express the most dangerous ambitions of the American Empire, whether in his statement that “Putin cannot remain in power” last March or the three times that he openly affirmed a commitment to use U.S. military force to “defend” Taiwan from China. The same week that Bolton made clear his role as a coup plotter, Biden visited Israel where he verbalized equally aggressive remarks about the U.S.’s relationship with its fellow settler colonial entity.

Yonit Levi of Israel’s Channel 12 News asked Biden about the gap between Democrats who call Israel an apartheid state and his administration. Biden answered with the following:

Israel began another bombing campaign of Gaza the day after Biden left Israel on July 15th. By then, Biden had already touched down in Saudi Arabia to encourage the Gulf monarchy to increase oil production and reject business ties with Russia and China.

Biden’s maneuvers with Israel and Saudi Arabia are yet another slap in the face to Democratic Party voters. A majority of Democrats want the United States to increase support for Palestine and more than 99 percent fail to rank Israel as a top ally of the United States . Nearly two-thirds of Democratic Party voters oppose U.S. arms sales to Saudi Arabia due to its brutal war on Yemen and leading role in the murder of Washington Post columnist Jamal Khashoggi. While Biden feigned criticism of Saudi Arabia to the press following the trip, his fist bump with Saudi Crown Prince Mohammed Bin Salman received widespread condemnation on social media for sending a different message entirely.

The American Empire is not in the business of permanent strategies, just permanent interests. These interests have been met by a myriad of crises that have caused the political overseers of the empire to shed whatever clothes they had left to conceal their endless warmongering. Public confidence in the duopoly is at its lowest point. Mainstream corporate news media is widely distrusted. Economic instability fueled by endless austerity and war has chipped away at the already questionable legitimacy of the American Empire.

War is an extension of politics through state violence. State violence at all levels is a form of social control meant to reproduce and strengthen a given social order. Arming reactionary regimes such as Israel and Saudi Arabia, waging proxy wars, and militarizing the planet to build toward a hot conflict with Russia and China are all expressions of the American Empire’s addiction to state violence, apartheid, and regime change. Peace is an impossibility under such an arrangement. While a naked American Empire is indeed on its death bed, only a people’s movement can rid the planet of the enduring dangers that its rotting carcass holds for humanity. 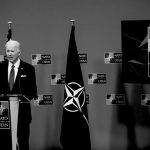 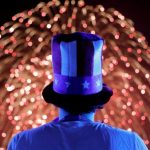