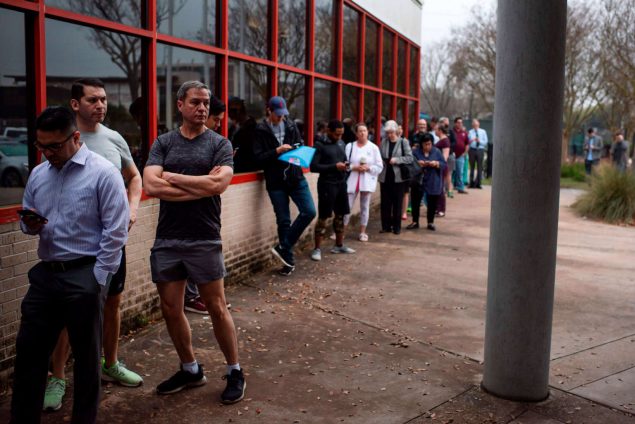 Voters wait in line to cast their ballots during the presidential primary in Houston, Texas, on Super Tuesday, March 3, 2020.

Texas has shuttered more polling places than any other state in the South since 2012, and most of the closures disproportionately hit Black and Latino areas, according to a new analysis.

Texas has shuttered more polling places than any other state in the South since 2012, and most of the closures disproportionately hit Black and Latino areas, according to a new analysis by The Guardian.

Texas has closed 750 polling locations since 2012, the Leadership Conference Education Fund, a civil rights group, reported last year. The state had one polling place for every 4,000 residents in 2012, but that number rose to 7,700 residents by 2018. The Guardian’s analysis found that the overwhelming majority of closures came in areas that saw the largest increase in Black and Latino residents.

“This is voter suppression — plain and simple,” said the progressive advocacy group MoveOn.

The moves are likely to worsen Texas’ already-low turnout rates, advocates warned, despite changing demographics and large growth in Black and Latino areas.

“The fact of the matter is that Texas is not a red state,” Antonio Arellano of the progressive Latino group Jolt told The Guardian. “Texas is a nonvoting state.”

Some counties shuttered half or more of their polling locations.

McLennan County, which includes Waco, closed 44% of its polling places between 2012 and 2018 even as its population grew by more than 15,000 people, with more than two-thirds coming from Black and Latino residents.

Brazoria County, near Houston, closed nearly 60% of its polling sites, in violation of the law. The county said the closures were “inadvertent.”

Though the poll closures are not linked to any specific policy, most came after the Supreme Court gutted the Voting Rights Act in 2013, allowing states with a history of voter suppression to make election changes without approval from the federal government. Many Southern states rushed to shut down nearly 1,700 polling places as soon as they were free from federal restrictions.

Many of the closures also came as Texas pushed to replace polling places with “vote centers,” which allow voters to cast their ballot at any location in the county rather than their assigned polling location.

Mary Duty, the chairwoman of the McLennan Democratic Party, told The Guardian that the voting centers “turned out to be kind of a nightmare” because large swaths of the state did not have a polling location.

But even if you subtract the 334 poll closures that came as a result of the voting centers, Texas still ranks among the top in states that have closed the most polling locations since the 2013 Supreme Court decision.

“Closing polling places has a cascading effect, leading to long lines at other polling places, transportation hurdles, denial of language assistance and other forms of in-person help, and mass confusion about where eligible voters may cast their ballot,” the Leadership Conference Education Fund report said. “For many people, and particularly for voters of color, older voters, rural voters, and voters with disabilities, these burdens make it harder — and sometimes impossible — to vote.”

Julie Oliver, a Texas Democrat running for Congress, said that Texas is “now in an accelerated period of illegal racist voter suppression.”

“Ever since Jim Crow, Texas has severely restricted the right to vote. Those restrictions have explicitly targeted Black and Latino communities,” she wrote, adding that she would push Congress to once again require Texas to get pre-clearance before making any electoral changes.

Note: This article was amended to state that Texas has shuttered more polling places specifically in relation to other states in the South, and a typo was fixed to change “country” to “county” in the line explaining vote centers. The headline was amended to clarify that the sites were closed in areas with increasing Black and Latino populations.