Tens of thousands of rightists and neo-Nazis rally in Warsaw on Nov 11 to mark ‘Polish independence’, call for ‘white Europe’

WARSAW—Tens of thousands of Poles marched across downtown Warsaw on Saturday, in an independence-day procession organized by a nationalist youth movement that seeks an ethnically pure Poland with fewer Jews or Muslims. 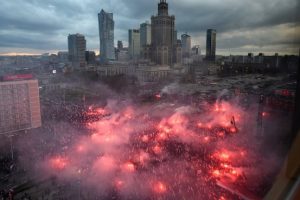 The largely young crowd shot off roman candles and many chanted “fatherland” and carried banners readking ‘White Europe’, ‘Europe will be white’ and ‘Clean blood’. Some of the marchers flew in from Hungary, Slovakia and Spain and waved flags and symbols that those countries used during their wartime collaboration with Nazi Germany.

A number of people in the crowd said they didn’t belong to any neo-fascist or racist organization but didn’t see a problem with the overall tone of what has become Poland’s biggest independence day event. “There are of course nationalists and fascists at this march,” said Mateusz, a 27-year-old wrapped in a Polish flag, “I’m fine with it. I’m just happy to be here.”

The march, organized by a group called the National Radical Camp, underscores the rightward politics of a growing section of Polish youth. The Radical Camp presents itself as the heir to a 1930s fascist movement of the same name, which fought to rid Poland of Jews in the years just before the Holocaust. A second group, All Polish Youth, also named after an anti-Jewish interwar movement, co-organized it. Demonstrators burned flares and waved Polish flags during the march.

Officials in the city government said they thought the march reflected poorly on Poland, but they said they had no choice but to approve the demonstration, as it fulfilled the legal requirements: It qualified as a celebration of Polish history. “This is not the type of event I would take my children to,” said Agnieszka Klab, spokesperson for the Warsaw City Council.

The Radical Camp has been holding independence-day marches since 2009. Until several years ago, it struggled to attract more than a few hundred people. In the past three years, it has become the largest independence-day occasion in Poland, and one of the largest nationalist marches of its kind anywhere in Europe. Saturday’s was expected to be the largest ever. Police estimated the crowd at 60,000.

“It’s getting more and more vicious,” said Jakub Skrzypek, 25, one of about a dozen counterprotesters standing behind a banner that read “We Are Polish Jews” and surrounded by police. “We are really in fear.”

The Radical Camp’s followers argue on their social-media accounts and in their literature that the influx of Syrian refugees into Europe is part of a conspiracy driven by Jewish financiers, who are working with Communists in the European Union to bring Muslims into Europe, and with them, Shariah law and homosexuality. The group has regularly held events to mark a 1936 pogrom against Jews.

Its symbols were displayed on a banner that appeared over a Warsaw bridge, reading: “Pray for Islamic Holocaust.” People took part in a antifascist counterprotest held by an umbrella coalition for organizations and social movements that oppose nationalism in Poland.

This year, the Radical Camp said it was adopting a new slogan, a quote from a July speech here by President Donald Trump : “We want God.”

“This march is just an expression of a bigger social phenomenon, which is definitely very troubling, and is the growing acceptance of extreme nationalism and xenophobia among young people in Poland,” said Rafal Pankowski, a political-science professor at private university Collegium Civitas in Warsaw. “It is a contrast: Polish parents and grandparents are paradoxically more liberal than their young.”

Richard Spencer, an American until recently banned from 26 European countries who wants to create a country just for white people in North America, was invited. The Polish government asked him to stay home, and he didn’t show up. Roberto Fiore, an Italian anti-immigration politician who describes himself as a fascist, was scheduled to appear.

Some Poles on Facebook and Twitter said they were staying away from the city center on their country’s independence day, to avoid potential violence. Three previous years’ marches devolved into tear-gas-clouded scuffles with police. Police detained at least 45 people Saturday.

Similar movements have taken hold—even captured seats in parliament—in Hungary, Slovakia and Czech Republic. Some of these countries are among Europe’s most prospering. Poland is the only country in the EU that didn’t experience a single quarter of economic contraction after the financial crisis.

Still, the fear that Poland is under siege by distant elites has captured the imagination of some here, as has the worry that hordes of immigrants could soon pour over the border. Government-controlled media broadcasts near-nightly reports on crimes committed by Muslims in Europe. On Saturday, Polish state television called the procession a “great march of patriots.

“It’s like this inner need we have,” said Lukasz, a 24-year-old protester. “We want a Poland that will be for Polish people.”

‘Europe Will Be White’, one sign carried by marchers read. Right-wing racists flew in from Slovakia, Hungary, and Spain to join tens of thousands of Poles at a white supremacist rally in Warsaw on Saturday where marchers bore signs with messages like “Europe Will Be White” and “Clean Blood.”

Reporters on hand said the crowd numbered roughly 60,000, citing police estimates. A polish neo-Nazi group called The Radical Camp, borrowing its name from a 1930s fascist movement in the country, organized the march.

“A number of people in the crowd said they didn’t belong to any neo-fascist or racist organization but didn’t see a problem with the overall tone of what has become Poland’s biggest independence day event,” the Wall Street Journal noted.

Counterprotesters also showed up in far smaller numbers. One small group in the square held a sign reading “We are Polish Jews” and stood encircled by police. Nearby, a group of 2,000 anti-fascists rallied in opposition to the massive hate march.

The Radical Camp made the slogan of this year’s rally “We Want God,” a line Trump quoted from an old Polish folk song during a state visit to Warsaw in July. In prior years, The Radical Camp was only able to muster a few hundred attendees at its own events on independence day, a national holiday with many official and semi-official mass events to commemorate Poland’s 1918 emergence from a century of foreign rule.

While Poland’s economy largely escaped the scourge of the global financial crisis, islamophobic backlash there against refugees fleeing Syria’s long-running civil war has helped empower fascist political organizers. The annual independence commemoration has become a flashpoint for such groups over the past few years, with civil unrest and flag-burning now common on the day.

The rally was even an international draw for like-minded fascists and white Christian nationalists in other European countries. Reporters noted the presence of marchers from relatively nearby Slovakia and Hungary, and from farther flung ultra-rightwing parties in Sweden and Spain.

Poland’s domestic politics have tracked right in recent years as well. Law and Justice, the right-wing party currently leading the government, styles itself after ethno-nationalist political movements in Hungary and elsewhere. The party has pushed Polish policy in a xenophobic direction, giving free rein to ideas that are also stirring in Europe’s largest democracies. Germany’s extreme right had its best electoral showing in decades this fall. Similar nationalist and racist ideologies are growing in influence in Greece, Austria, Switzerland, and numerous other democracies across the continent.

The Law and Justice party in Poland has already acted to consolidate and prolong its power in defiance of democratic norms there. Its ministers passed a law allowing the government to fire the senior members of the judiciary, effectively giving Law and Justice control over the official validity of polish elections. The party’s approval of Saturday’s mass mobilization of ethno-nationalists in Warsaw was on display in official state media, where evening television news programs that routinely hype the threat of islamist violence described the rallygoers as “patriots.”

Note by New Cold War.org:
The two articles above make no mention of the fact that Poland, as led by its right-wing government, is a very active member and partner of the anti-Russia NATO military alliance. No comment from NATO leaders was apparently sought by reporters of what these leaders think of a mass, neo-Nazi rally taking place in one of their key allied countries.

NEW YORK—The World Jewish Congress has denounced the Ukrainian city of Vinnitsa’s “disgraceful and deplorable” move to celebrate nationalist leader Symon Petliura, whose Ukrainian People’s Republic killed tens of thousands of Jews in pogroms under his leadership in 1918-1921, and urged the local authorities to pull a monument unveiled over the weekend in his honor….

During the last two years, a notable number of streets in Ukraine have been named after World War Two-era Ukrainian nationalists who collaborated with the Nazis and were involved in the Holocaust as well as the mass ethnic cleansing of Poles in Western Ukraine. Josh Cohen explained in a recent Reuters column that it is part of Ukraine’s post-Maidan Government attempt to create a new national memory for Ukraine: