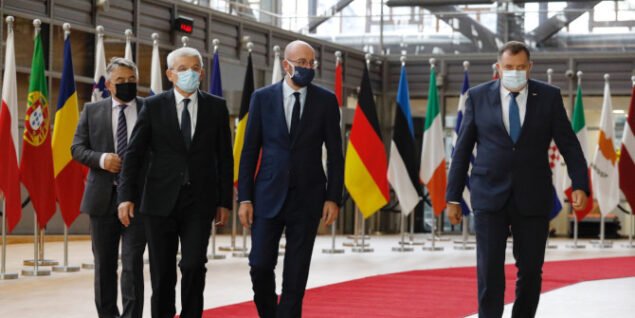 Recent statements made by Milorad Dodik, the Serb member of Bosnia-Herzegovina’s three-person presidency, have prompted fears about the country’s future. Ivor Sokolić writes that while Dodik’s actions are unlikely to result in the imminent breakup of Bosnia-Herzegovina, they hide a more pressing problem: the growing inability and lack of willingness of the state to make the lives of ordinary Bosnians better. Instead, key political actors use state institutions and international actors to perpetuate divisions that entrench their hold on power.

Recent statements made by Milorad Dodik, the Serb member of Bosnia-Herzegovina’s three-person presidency, have prompted fears about the country’s future. Ivor Sokolić writes that while Dodik’s actions are unlikely to result in the imminent breakup of Bosnia-Herzegovina, they hide a more pressing problem: the growing inability and lack of willingness of the state to make the lives of ordinary Bosnians better. Instead, key political actors use state institutions and international actors to perpetuate divisions that entrench their hold on power.

At the beginning of November, Milorad Dodik announced a range of legislative changes that would separate Republika Srpska (the majority Serb entity in Bosnia-Herzegovina) from Bosnia’s central government, effectively creating parallel institutions in Republika Srpska. These changes included withdrawal from judicial, tax and customs institutions, but most alarming was his intention to create an independent army. This can not only be interpreted as an attempt to break up Bosnia-Herzegovina, but also as a revival of the same armed formations that committed mass atrocities across the country in the 1990s.

The proposed legislative changes were just another in a series of threats Dodik has made to break up the country over the last 15 years. They have become so common that few take them seriously. This time, however, the timing was significant. Dodik’s threats coincided with Russian pressure at the United Nations to block the annual renewal of the EU military mission in Bosnia-Herzegovina (EUFOR), which was due to take place at the UN Security Council session on 3 November.

Together, Russia and Dodik have been pushing for less UN and EU involvement in Bosnia-Herzegovina for some time. They have called for the non-renewal of the EUFOR mission, as well as the removal of all international executive oversight. Most notably, they wish to abolish the Office of the High Representative (OHR), which has vast power over Bosnian politics.

In the end, the EUFOR mandate was extended for another year. Dodik’s threats once again amounted to nothing more than rhetoric. However, a compromise was made: there was no mention of the High Representative or the OHR. Slowly, but steadily, Dodik has once again continued to successfully pursue his political agenda.

Dodik has managed to consistently strengthen his own political position and made gains in his pursuit of increased autonomy for Republika Srpska by making the most of conflicts and tensions across all levels of Bosnian politics.

At the international level, Dodik has timed his calls for secession with Russian challenges to the power and capacity of the United States to act on the global stage, reflected in this case on the UN Security Council. He has made the most of the faltering EU enlargement process and waning soft power by aligning himself with right-wing populist and Eurosceptic leaders, such as Hungary’s Prime Minister Viktor Orbán and Slovenia’s Prime Minister Janez Janša.

Much like Orbán and Janša, Dodik portrays Muslims as a threat to his country and specifically the Serb ethnic group. This, together with the denial of war crimes committed against Bosniaks by Serb forces in the wars of the 1990s (most notably the denial that the killings of 8,000 Bosniaks in Srebrenica constituted genocide), wins him political points with his electorate.

Finally, closer to home, Bosnia’s neighbours Croatia and Serbia regularly interfere in and comment on Bosnian politics to pursue their own political goals, calling for more rights for Croats and Serbs. This often comes at the expense of Bosniaks, which makes it easier for Dodik to pursue his anti-Muslim rhetoric.

At the everyday level, Dodik uses group identity politics to strengthen his position and mobilise supporters. Bosnia remains a structurally segregated country where it is difficult for individuals to come into routine contact with members of other ethnic groups. Cities and towns have become ethnically homogenised and many institutions, such as schools, are divided along ethnic lines.

Additionally, norms of social interaction restrict the possibility to spend time with other ethnic groups. Dodik’s hold on power is in great part based on rhetoric that vilifies other ethnic groups and perpetuates divisions. Most notably, he minimises the role of the Bosnian Serb army in committing mass atrocities during the war in Bosnia and he portrays Muslims as a threat to Serbs.

Imminent conflict is unlikely. The international community is still there and invested in the situation. But this does not mean that the ordinary citizens of Bosnia-Herzegovina will not continue to suffer and see their living conditions and prospects for improvement decrease. There are three likely consequences from the current situation.

First, Dodik is likely to continue entrenching his power. International actors who directly or indirectly help Dodik are unlikely to change their politics. On the other hand, the US is still trying to define its new role internationally and specifically in Bosnia, while the EU remains reticent to take significant action (such as sanctioning Dodik or more forcefully pushing an integration agenda). This allows Dodik to gain power and Russia to point at ineffective US foreign policy and failing EU soft power. At the same time, on the everyday level, little is being done to confront growing anti-Muslim sentiment and historical revisionism. The situation is likely to remain favourable to Dodik’s politics at all levels.

Second, Dodik is likely to keep gaining concessions to his benefit, which also makes future concessions more likely. For example, Dodik’s threats of secession in 2009 resulted in international judges and prosecutors no longer being allowed to investigate organised crime and corruption in Bosnia. The country has since seen few prosecutions of high-level political figures for corruption and there is a high degree of state capture, especially in the judiciary. If the OHR is made irrelevant or more international oversight is removed from Bosnia, then Dodik will be able to further capture state institutions not already under his control.

Third, and most worrying, is that this process will continue to hurt the Bosnian people. These dramatic moments often quickly fizzle out, but so does the gaze of actors who may be able to change things. They are lulled into a sense of security that the status quo is bearable, while slowly the structures that make life for ordinary citizens in Bosnia so difficult become more entrenched. Nationalist politicians and the institutions they capture are not able to effectively tackle the myriad of problems that citizens face. Nor do they seem interested in doing so. Living standards continue to slide and, as many protests over the years have shown, the public is left with little ability to prompt a substantive change in these circumstances.

Note: This article gives the views of the author, not the position of EUROPP – European Politics and Policy or the London School of Economics. Featured image credit: European Council

Ivor Sokolić is a Lecturer in Politics and International Relations at the University of Hertfordshire. Prior to this he worked as a Research Officer at the European Institute and Department of Government at the London School of Economics and Political Science. His research focuses on transitional justice, reconciliation and nationalism in the states of the former Yugoslavia.