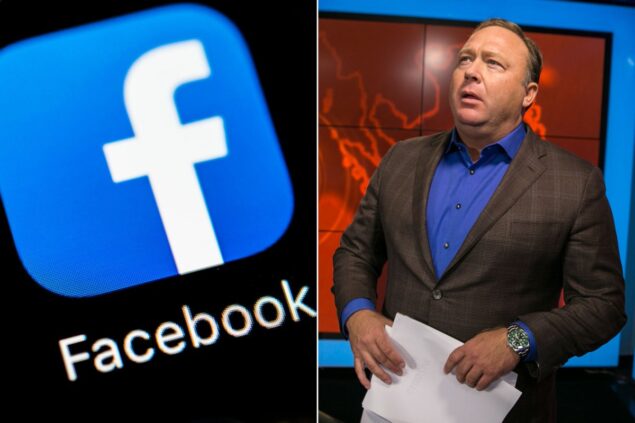 You may have seen a story this week detailing how Facebook shut down a series of accounts. As noted by Politico, Facebook claimed these accounts “sought to inflame social and political tensions in the United States, and said their activity was similar — and in some cases connected — to that of Russian accounts during the 2016 election.”

The social network is too big and broken to properly function, and these “fixes” will only create more problems…

You may have seen a story this week detailing how Facebook shut down a series of accounts. As noted by Politico, Facebook claimed these accounts “sought to inflame social and political tensions in the United States, and said their activity was similar — and in some cases connected — to that of Russian accounts during the 2016 election.”

Similar? What does “similar” mean?

The death-pit for civil liberties is usually found in a combination of fringe/unpopular people or ideas and a national security emergency.

This is where we are with this unsettling new confab of Facebook, Congress and the Trump administration.

Read this jarring quote from Sen. Mark Warner (D-VA) about the shutting down of the “inauthentic” accounts:

“Today’s disclosure is further evidence that the Kremlin continues to exploit platforms like Facebook to sow division and spread disinformation… I also expect Facebook, along with other platform companies, will continue to identify Russian troll activity and to work with Congress…”

This was in a story in which Facebook stated that it did not know the source of all the pages. They might be Russian, or they might just be Warner’s idea of “sowing division.” Are we comfortable with that range of possibilities?

Many of the banned pages look like parodies of some paranoid bureaucrat’s idea of dangerous speech.

A page called “Black Elevation” shows a picture of Huey Newton and offers readers a job. “Aztlan Warriors” contains a meme celebrating the likes of Geronimo and Zapata, giving thanks for their service in the “the 500 year war against colonialism.”

And a banned “Mindful Being” page shared this, which seems culled from Jack Handey’s Deep Thoughts bit:

“We must unlearn what we have learned because a conditioned mind cannot comprehend the infinite.”

Facebook also wiped out a “No Unite The Right 2” page, appearing to advertise a counter-rally on the upcoming anniversary of the violence in Charlottesville, Virginia.

Facebook was “helped” in its efforts to wipe out these dangerous memes by the Atlantic Council, on whose board you’ll find confidence-inspiring names like Henry Kissinger, former CIA chief Michael Hayden, former acting CIA head Michael Morelland former Bush-era Homeland Security chief Michael Chertoff. (The latter is the guy who used to bring you the insane color-coded terror threat level system.)

These people now have their hands on what is essentially a direct lever over nationwide news distribution. It’s hard to understate the potential mischief that lurks behind this union of Internet platforms and would-be government censors.

As noted in Rolling Stone earlier this year, 70 percent of Americans get their news from just two sources, Facebook and Google. As that number rises, the power of just a few people to decide what information does and does not reach the public will amplify significantly.

In a way, this is the other shoe dropping after last week’s much-publicized brouhaha over Infowars lunatic Alex Jones. Jones had four videos removed from YouTube and had his Facebook page banned for 30 days, though he seemed to find a way around that more or less instantly.

These moves were celebrated across social media, because who doesn’t hate Alex Jones?

The complainants in the Jones case included parents of Sandy Hook victims, who have legitimate beef with Jones and his conspiratorial coverage. The Infowars reports asserting the grieving parents were green-screen fakes were not just demonstrably false and rightfully the subject of a defamation suit, but also seemingly crossed a separate line when they published maps and addresses of family members, who experienced threats.

When Jones and his like-minded pals cried censorship and bias, they came across as more than a little disingenuous. After all, right-wingers have consistently argued on behalf of the speech rights of big corporations.

Conservative justices have handed down rulings using the First Amendment to hold back regulation of big tobacco and the gun industry, and to justify unlimited campaign spending. Citizens United was a crucial moment in the degradation of the First Amendment, essentially defining corporate influence as speech.

As many pointed out last week, the Jones ban was not a legal speech issue – not exactly, anyway. No matter how often Jones yelped about “Hitler levels of censorship,” and no matter how many rambling pages he and his minions typed up in their “emergency report” on the “deep state plan to kill the First Amendment,” it didn’t change the objectively true fact their ban was not (yet) a First Amendment issue.

So it’s true, there was no First Amendment issue with the Jones ban. But that’s the problem.

The pre-Internet system for dealing with defamatory and libelous speech was litigation, which was pretty effective. The standard for punishment was also very high. In the 1964 Supreme Court case New York Times v. Sullivan — the bedrock case for libel law involving a public figure — the court went out of its way to make sure that complainants needed to prove reckless or knowing disregard for fact.

Among other things, the court worried that absent such a tough legal standard, outlets would play it too safe with speech, and “make only statements which ‘steer far wider of the unlawful zone.’”

This mostly worked. Historically there were few analogs to Infowars that got anything like wide distribution because of the financial threat, which scared publishers most of all. In order to have power to distribute widely you needed resources, but you put those resources at risk if you defamed people.

That all changed with digital media. Way back in 1996, when mastodons roamed the earth and people used dial-up to connect to the Internet, Congress passed the Communications Decency Act. It contained the following landmark language:

“No provider or user of an interactive computer service shall be treated as the publisher or speaker of any information provided by another information content provider.”

Essentially this meant that Internet providers wouldn’t be treated like news organizations. In the eyes of the law, they were less like CBS or Random House than they were bookstores or newsstands.

The rule allowed platforms to grow exponentially without the same fear of litigation. Companies like Facebook and Google became all-powerful media distributors, and were able to profit from InfoWars-style programs without having to be liable for them.

This led to the flowering of so much obnoxious speech that the First Amendment acquired a reputation as a racist con, and online media distributors, instead of being sued themselves as publishers, began to be viewed as potential restorers of order, beneficent censors.

Now, at a moment of crisis and high political tension, the public seems unable to grasp the gravity of allowing the government or anyone else to use that power.

It is already a scandal that these de facto private media regulators have secret algorithmic processes that push down some news organizations in favor of others. Witness the complaints by outlets like Alternet, Truthdig and others that big platforms have been de-emphasizing alternative sites in the name of combating “fake news.”

But this week’s revelation is worse. When Facebook works with the government and wannabe star-chamber organizations like the Atlantic Council to delete sites on national security grounds, using secret methodology, it opens the door to nightmare possibilities that you’d find in dystopian novels.

The sheer market power of these companies over information flow has always been the real threat. This is why breaking them up should have long ago become an urgent national priority.

Instead, as was obvious during the Senate hearing with Mark Zuckerberg earlier this year, politicians are more interested in using than curtailing the power of these companies. The platforms, for their part, will cave rather than be regulated. The endgame here couldn’t be clearer. This is how authoritarian marriages begin, and people should be very worried.