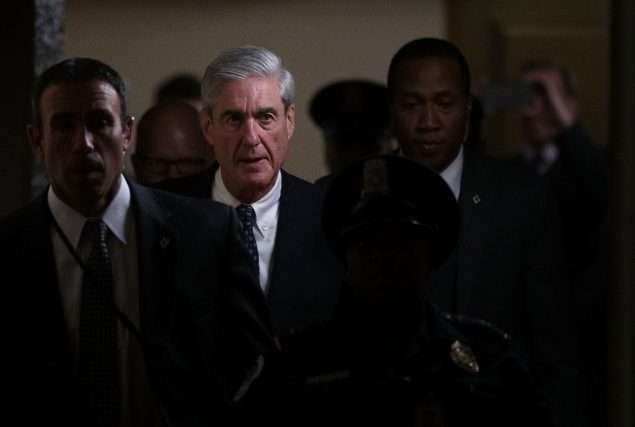 Special counsel Robert Mueller (2nd L) leaves after a closed meeting with members of the Senate Judiciary Committee June 21, 2017 at the Capitol in Washington, DC. The committee meets with Mueller to discuss the firing of former FBI Director James Comey.

Donald Trump couldn’t have asked for a juicier 2020 campaign issue… a meticulous in-depth analysis of Russiagate by Matt Taibbi.

“[T]he investigation did not establish that members of the Trump Campaign conspired or coordinated with the Russian government in its election interference activities.”

That one sentence should end a roughly 33-month national ordeal (the first Russiagate stories date back to July 2016) in which the public was encouraged, both by officials and the press, to believe Donald Trump was a compromised foreign agent.

After the 2016 election, the storyline instantly became that Trump was an illegitimate president, a foreign operative who’d cheated his way into office and would therefore need to be removed ahead of schedule.

There were too many stories that dwelled on this theme to count here, but we all saw them. New York asked, Was Trump “meeting his handler” in Helsinki? The Daily Beast asked, “Is he a Russian asset?”

(Note: the extravagant use of hack spy-novel language during this period is going to look particularly ridiculous in history books decades from now.)

Some outlets didn’t even put their beliefs in the form of a question. “Trump Is Compromised by Russia” read a not-unusual editorial in the New York Times last November.

If you tried to protest that this had not been proven, that journalists should be more careful about leveling such serious accusations, the first line of response (if it wasn’t accusing you of being in league with Putin) was usually a version of: Be quiet, you don’t know what Mueller knows.

Mueller knows became the cornerstone belief of nearly all reporters who covered the Russia investigation. Journalists reveled in the idea of being kept out of the loop, thrilled to defer to the impenetrable steward of national secrets, the interview-proof Man of State. He was no blabbermouth Donald Trump, this Mueller! He won’t tell us a thing!

“What Robert Mueller knows — and Isn’t Telling Us,” proclaimed Wired in February, going on to list the many areas where Mueller “probably knows far more than he’s willing to say.”

Last month’s “What we know we don’t know from Mueller’s investigation,” by the Washington Post, marveled at Mueller’s ability to keep secrets. It made note of former Trump aide George Papadopoulos: “Mueller’s team kept him under wraps for months, with barely a hint of his importance.”

Dan Rather told us that “what Mueller knows” will make the Cohen/Manafort pleas “pale in comparison.” Often we were even told the things Mueller hadn’t told us yet were the most important facts of all, that his filings were “more revealing by what they did not include than by what they did.”

Other pieces were just embarrassing, the news version of “We’re not worthy!” The story Axios released after Mueller’s Internet Research Farm indictments was entitled “We know nothing; Mueller knows all.” Axios gushed that Mueller indicted a bunch of Russians no one ever expected to appear in court without word getting out. This, they said, spoke to Mueller’s “deep, serious investigative work” which had gone “totally under radar, with zero leaks.”

“Amazing there was no hint of this in the media,” Axios noted.

All this hyping of Mueller The Omniscient dovetailed with the preposterous mythologizing of the special counsel through consumer goods (Mueller action figures! “Mueller time!” beverage mugs! Saint Robert Muller prints!) and breathless stories like the Vanity Fair ode to the “dreamiest G-man to hunt for collusion.”

Then there were episodes like the “All I want for Christmas is you!” song performed by the SNL cast. “I don’t need a full impeachment / I just need a little fun / Please don’t tell us we aren’t crazy / At least indict his oldest son.”

Now Santa Mueller has gone back to the North Pole, leaving just a written report. It absolutely should be released in full. It’s very possible that the full report contains a great many details that “Mueller knew” and we didn’t, and which will be embarrassing to Trump.

But the report’s key conclusions, as the Atlantic puts it, have already “quelled some of the fondest hopes of the anti-Trump ‘resistance.’”

Beyond the failure to “establish” Trump had colluded or coordinated with Russia, the letter had (despite news reports to the contrary today) a good deal to say on the obstruction issue.

The report’s most-quoted line read, “while this report does not conclude that the President committed a crime, it also does not exonerate him.”

In essence, Mueller punted the question of obstruction back to Barr, who together with Deputy AG Rod Rosenstein has already decided the report didn’t provide enough evidence to support a criminal charge in any of the “number of actions” committed by Trump that raised the specter of obstruction.

This isn’t surprising, given that Barr is a Trump appointee. The Atlantic is one of many outlets to have already cried foul about this (“Barr’s Startling and Unseemly Haste” is the name of one piece). But Barr’s letter includes a telling detail from Mueller himself on this issue (emphasis mine):

In making this determination, we noted that the Special Counsel recognized that “the evidence does not establish that the President was involved in an underlying crime related to Russian election interference,” and that, while not determinative, the absence of such evidence bears upon the President’s intent with respect to obstruction…

In other words, it was Mueller, not Barr, who concluded there was no underlying crime, so if the next stage of this madness is haggling over an obstruction charge, that would likely entail calling for a prosecution of Trump for obstructing an investigation into what even Mueller deemed non-crime.

After all the insistence that we put our trust in St. Mueller because he “knows all,” the new story suddenly is that Mueller all along didn’t know and didn’t try to know. The Atlantic’s take was, “Mueller, a career G-man, is fundamentally legally conservative,” which means “he has a narrow view of his own role.”

Therefore, despite the fact that Mueller didn’t determine he had evidence for a charge, we can “infer his conclusions by reviewing how he marshaled the evidence for and against guilt.”

This meant we should read between the lines of what Mueller ended up “saying,” so we can divine (I use that religious word on purpose) his true meaning. By not delivering the desired goods, Mueller is now being described as “The God that failed Democrats,” by Edward Luce of the Financial Times, who makes the shockingly belated observation that the Democrats putting all their hopes in the “magic bullet” of the Mueller investigation “postponed the harder, less glamorous work the party needs to be doing.”

MSNBC HOST Chris Matthews said something very similar. First, he recounted his dismay as he learned over the weekend there wouldn’t be new indictments of Trump family members, his inner circle, etc. From there, Matthews deduced, “There’s not going to be even a hidden charge…. They don’t have him on collusion.”

Members of the media like Matthews spent two years speaking of Mueller in mythical tones, hyping him as the savior who was pushing those “walls” that were forever said to be “closing in” on Trump. Mueller, it was repeatedly said, was helping bring about “the beginning of the end.”

Over and over, audiences were told the investigation had hit a “turning point,” after which Trump would either resign or be impeached, because as Brian Williams put it, “Donald Trump is done.”

This manipulative brand of news programming preyed upon the emotional devastation of liberal audiences, particularly the older people who watch cable. It told them the horror they felt over Trump’s election would be alleviated in short order. The median age of the CNN viewer is 60 and MSNBC’s is 65, and these people were urged for years to place their trust in Santa BOB, who knew all and whose investigation would surely lead to impeachment and “the end.”

All you had to do was keep turning in, because the good news could come any minute now! The bombshell is coming! Never mind that this is causing our profits to soar. Don’t wonder about our motives, even though outlets like MSNBC saw a 62 percent bump in viewership in the first full year of Russiagate coverage. Just keep tuning in. The walls are closing in!

That was bad enough, but now that the Mueller dream seems to have died, news organizations are acting like they didn’t hype Mueller as savior.

Matthews, in a tone that suggested he was being the sober adult delivering tough love, completed his thought about how “they don’t have him on collusion” by saying, with a shrug of undisguised disappointment:

“So I think the Democrats have got to win the election.” He added, “There’s no waiting around for uncle Robert to take care of everything.”

I know no one cares how this sounds to non-Democrats, but this is a member of the media looking sad that Democrats would have to resort to actual democracy to win the White House back.

Given that “collusion” has turned out to be dry well, to the ordinary viewer it will look a hell of lot like the MSNBCs of the world humped a fake story for two consecutive years in the hopes of overturning election results ahead of time. Trump couldn’t have asked for a juicier campaign issue, and an easier way to argue that “elites” don’t respect the democratic choices of flyover voters. It’s hard to imagine what could look worse.

For the commercial press to recapture any dignity after this collusion debacle, it has to at least start admitting to its role in artificially raising expectations in the last two years. It’s hard to imagine them doing that, however. This story has been so enormously profitable for cable stations, in particular, it will be hard for them to let go of this narrative. What are they going to do, go back to just reporting the news? One can almost feel how depressed network executives must be at the thought. They’ve trained audiences to expect bombshells. What will they sell now?

This story has been updated.