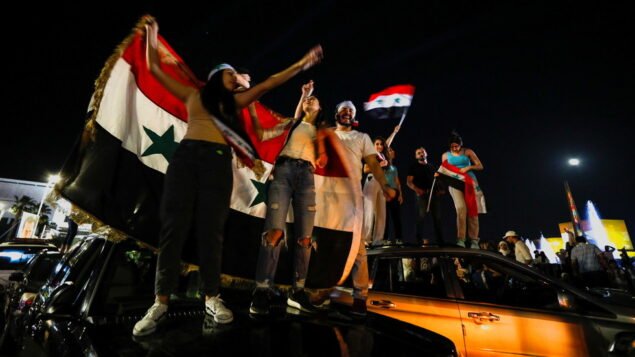 The Western leadership and establishment media have once again derided the Syrian presidential vote, but the people don’t care. They’re too busy celebrating the outcome of the election and the defeat of terrorism in their country.

The Western leadership and establishment media have once again derided the Syrian presidential vote, but the people don’t care. They’re too busy celebrating the outcome of the election and the defeat of terrorism in their country.

The irony of media outlets and pundits from America tweeting about what they view as the failure to hold free and fair elections in Syria was not lost on some. I wrote yesterday of the jubilation I saw in eastern Ghouta, where Syrians were celebrating the arrival of election day and proudly voting. I also noted that people “in eastern Ghouta were put through a hell that most of us, living safely far from war, cannot begin to fathom.” Back in 2018, I had seen their tortured faces shortly after their liberation. That made seeing them this week smiling incredibly moving.

Just ahead of the vote, I predicted there would be Western cynicism if President Assad won again, which would mean the West had failed in its regime-change project. I was right.

Syrian analyst Kevork Almassian, of Syriana Analysis, tweeted a thread about the mass celebrations around Syria, including in Homs, once dubbed the “capital of the revolution” by the delusional crowd, and Aleppo, the city the Western media said “fell” when it was liberated of the terorists who reportedly murdered up to 11,000 civilians via their bombings and snipings.

He also noted that the media’s claims of Sunni Muslims hating Assad had no basis in reality (never mind the fact that the First Lady is Sunni, as are many in top leadership positions), tweeting photos of masses of Sunnis voting.

The Guardian, guilty of some of the filthiest war propaganda against Syrians, and usually reporting from Istanbul, deemedthe 2021 elections “fake” and a “sham”. But the Guardian has never liked to give voice to the vast majority of Syrians in Syria, preferring instead to quote al-Qaeda-linked “media activists” and “unnamed sources”. So, it’s hardly surprising it would denigrate the event that Syrians are currently celebrating around the country.

Likewise, the BBC, another contender for the most outstanding war propaganda on Syria, unsurprisingly cited the “opposition” as calling the elections a “farce”.

The Western media likewise bleated “farce” when Syria provided 17 witnesses to testify at the Hague against the claims that Syria had used a chemical agent in Douma – a narrative that has been thoroughly debunked. And they’re still lyingafter all these years.

This outstanding report from Syria by Eva Bartlett penetrates the 'iron dome' of Western propaganda, also known as news.
It is about a chemical attack that never happened in a country attacked, subverted and blockaded in your name.https://t.co/AX1Zwbg0g0

Speaking to Syrian media yesterday in Douma, Assad said of the West’s derision of the elections: “The best response to colonialist countries with histories of genocide and occupations was the mass turnout of the people for the vote.”

And, regarding what the West thinks of the legitimacy of those elections, he concluded: “Your opinions are worth zero, and you are worth 10 zeros.”

On Wednesday, the government extended the time in which people could vote by an additional five hours, as they did back in 2014, due to the high turnout. It even had to provide more voting boxes. In fact, in 2014, in Lebanon, which hosts the largest per capita population of Syrian refugees in the world, voting was extended not merely by five hours, but by an entire day.

As I wrote recently, Western nations have closed Syrian embassies globally to prevent those eligible from voting. But interestingly, as I learned from political analyst Laith Marouf in our discussion this week, “Syrians in the US went to the embassy at the UN and voted. That was a direct challenge to American hegemony, since the Americans closed the Syrian embassy in DC. But there is still a Syrian embassy at the UN, and that they can’t touch, the Americans. So many people showed up at the UN headquarters, waving flags, and so on.”

According to Marouf, in Beirut, tens of thousands Syrians went to the Syrian embassy last week, but “members of the Lebanese Forces party cut the roads towards the embassy and attacked cars and buses carrying Syrian citizens,”allegedly killing one in front of his children and on national live television.

“The other two countries that host the majority of Syrian refugees or immigrant populations, Germany and Turkey, again blocked the Syrian votes from happening,” he said.

Marouf spoke of the candidates, noting there were three: a leader of the opposition, a former minister, and President Assad.

“They have been vetted through security, making sure that they stand for the sovereignty of Syria, given that Syria has been living under a global war of terrorism, led by the US.”

On the ground on election day

I wrote on election day of the vibrance and peace I witnessed in Douma, and tweeted about the celebrations, about the Syrians singing and dancing. One woman in Irbeen, a village in eastern Ghouta, told me, “Today is historic. He is writing victory, a renewed victory for Syria, the general and protector of Syria, Bashar al Assad. The people you see coming, do so by their free will.”

A side note: from the cross necklace she wore, I knew the woman was a Christian. The “rebel” terrorists the West supports and whose sadistic death cult they would have installed to govern Syria would have persecuted, even killed, women like her.

And that’s the crux of it: Syrians aren’t just celebrating the leader they overwhelmingly love and respect, they’re celebrating the defeat of this terrorism in their country and of the imperialists’ regime-change project in Syria.

A Syrian-American friend, Johnny Achi, flew to Syria expressly to vote in the elections. He told me: “I’m a Syrian citizen and have lived in the United States for about 30 years. I’m here in Damascus to exercise my rights and duties as a Syrian citizen, since the US chose to close our embassies. As long as the embassies are closed, we’re going to keep making the trip here, to exercise our duty and our democratic right.”

“I chose Douma, in eastern Ghouta, under the ‘rebels’ until 2018, to show that there is a big turnout here, that people are happy to be back in a government-controlled area. Everyone I talked to is so jubilant that they got rid of all of Jaysh al-Islam, Faylaq al-Rahman, and all those brigades that were making their lives miserable,” he said.

In Achi’s view, the US would not have accepted any of the candidates, no matter who won.

“They decided that this election was illegal. Their excuse this time is how can you have a democratic election when you have land under occupation? But the land is occupied by Turkey and the US. If they would leave us alone, we would have freed those three provinces and would have all 14 provinces under Syrian control,” he said. “But this vote will help us liberate those provinces still under occupation.”

The pundits will opine, the media will screech, but aside from addressing that, I don’t care, and Syrians don’t care because they’re too busy celebrating.

On Thursday, while the votes were still being counted, I passed through Umayyad Square, a massive roundabout in central Damascus, where a party was beginning. Later in the evening, I returned, staying until after the votes had been counted and Assad had been declared the winner. Electric doesn’t even begin to describe the mood of triumphant Syrians celebrating their victory.

I’ve been coming to Syria since 2014, making 15 visits in all, gathering many heartbreaking testimonies, being caught up in many dangerous encounters with mortars and terrorist sniper fire. I, too, celebrate the return of peace to Syria. But, moreover, I celebrate the Syrians’ shunning of Western diktats and for continuing to live their lives as they choose.

As I stood filming cheering Syrians, the results were announced. The crowd went wild and the party continued. Of course, Western media outlets won’t accept Assad’s 95.1% result, but those Syrians simply do not care. They know the West has lost the plot.

Eva Bartlett is a Canadian independent journalist and activist. She has spent years on the ground covering conflict zones in the Middle East, especially in Syria and Palestine (where she lived for nearly four years). Follow her on Twitter @EvaKBartlett