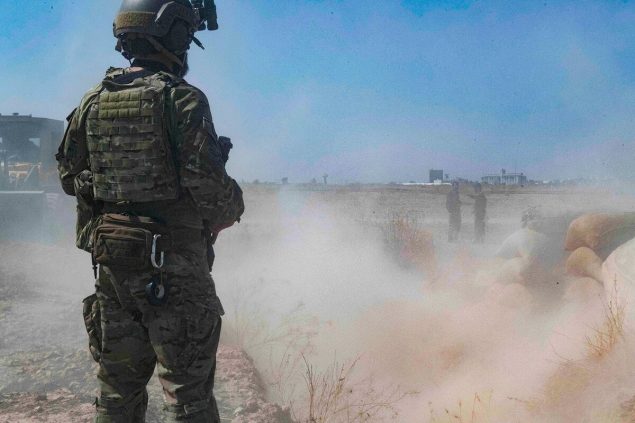 A U.S. soldier oversees members of the Syrian Democratic Forces on Sept. 21, 2019, as they demolish a Kurdish fighters’ fortification as part of the so-called “safe zone” near the Turkish border. (U.S. Army photo by Staff Sgt. Andrew Goedl via AP)

On October 5, the Russian Aerospace Forces carried out airstrikes on positions of Hayat Tahrir al-Sham near the town of Ballisa and Agr Hilltop in southern Idlib. The strikes eliminated at least 9 militants and became a logical continuation of the recent increase of intensity of strikes by the Syrian Air Force in northwestern Hama and northern Lattakia.

On October 5, the Russian Aerospace Forces carried out airstrikes on positions of Hayat Tahrir al-Sham near the town of Ballisa and Agr Hilltop in southern Idlib. The strikes eliminated at least 9 militants and became a logical continuation of the recent increase of intensity of strikes by the Syrian Air Force in northwestern Hama and northern Lattakia.

In the period from October 3 to October 6, Syrian helicopters delivered over 30 strikes on positions of Hayat Tahrir al-Sham, the Turkistan Islamic Party, Ajnad al-Kavkaz, Horas al-Din and other al-Qaeda-linked groups. Additionally, on October 6, rocket and artillery systems of the Syrian Army shelled militants near al-Zainah, located west of the militant stronghold of Jisr al-Shughur.

The Syrian-Russian strikes in the southern part of the Idlib zone, and the loss of underground infrastructure in the towns of Khan Shaykhun and al-Lataminah liberated by the Syrian Army in August forced Idlib militants to adapt their approach.

According to videos appearing online, Hayat Tahrir al-Sham is transferring its weapons depots, including those containing Grad rockets and mortar shells, to the border with Turkey. One of locations of militants’ weapon depots is the Bab al-Hawa border crossing. Radicals hope that their weapons and ammunition depots will be safer closer to positions of the Turkish military.

Syria and Russia are constructing a permanent bridge between the eastern and western banks of the Euphrates in western Deir Ezzor. Syrian personnel are working under the supervision of Russian engineers. Russian Special Forces troops are deployed to secure construction works. The bridge is set to be completed by the end of October.

Russia’s NTV TV channel reported that the bridge will be used to improve the humanitarian situation in the area and provide aid to people remaining on the eastern bank of the Euphrates, most of which is controlled by the US-backed Syrian Democratic Forces.

Tensions between the US and Turkey are once again growing over the situation in northeastern Syria. On October 5, Turkish President Recep Tayyip Erdogan announced that his country is not satisfied by the implementation progress of the ‘safe zone’ agreement with the US and Ankara is ready to launch a military operation to fight “terrorists” in northeastern Syria.

Turkey sees Kurdish militias, which are the core of the US-backed Syrian Democratic Forces, as terrorist groups. The Turkish-US ‘safe zone’ agreement was intended to address Turkish security concerns removing US-backed Kurdish militias from the border with Turkey. However, it seems that Washington is not hurrying up to do so. This behavior is setting ground for further tensions in the region. 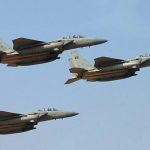 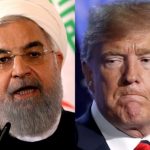