Syria Democratic Forces, with air support from the U.S.-led coalition, have taken near complete control of Manbij, the group announced. Islamic State fighters had held the northern Syrian city near the Turkish border since 2014. 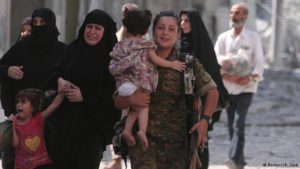 The Syrian Democratic Forces (SDF), a coalition of Kurdish and Arab fighters, had fought since June to drive Islamic State (IS, formerly ISIS/ISIL) out of Manbij, a key city on the supply route behind the jihadist group stronghold of Raqqa and the Turkish border.

The SDF is still doing the final sweep of the city after the final group of militants left on Friday. “The city is now fully under our control but we are undertaking sweeping operations,” Sharfan Darwish of the SDF-allied Manbij Military Council told Reuters. 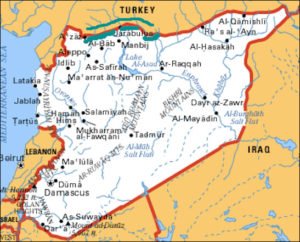 Map of Syria showing cities of Manbij and Jarablus, near Turkish border

During the withdrawal from the city, IS fighters took 2,000 civilians, including women and children, from the Al-Sirb neighborhood, Darwish told AFP. “They used these civilians as human shields as they withdrew to Jarabulus (40 km away), thus preventing us from targeting them,” he said.

Jarabulus is a major IS-held city on the Syrian side of the border with Turkey.

IS may have believed that the main effort by the U.S.-backed troops would be aimed at Raqqa, as U.S. Special Forces operators were photographed in the area in late May. Furthermore, Turkey had objected to the SDF advancing west of the Euphrates due to the large Kurdish presence within the coalition.

As a result, the U.S.-backed militia made rapid advances and was able to encircle some 2,000 IS fighters in Manbij after only ten days of combat operations in early June. Taking the city proved a long and arduous effort, however, which Darwish explained by concern for the civilian population.

Thousands return to Manbij after IS militants flee city

BEIRUT – Thousands of displaced residents streamed back into the northern Syrian town of Manbij on Saturday after U.S.-backed fighters ousted the last Islamic State militants from their former stronghold, residents and fighters report.

The Syria Democratic Forces (SDF) announced on Friday they had seized full control of the city near the Turkish border after the departure of the last of the militants, who had been using civilians as human shields.

Hundreds of cars and vehicles carrying families and their belongings flocked into the city from makeshift camps and villages in the countryside, where many of the city’s residents took shelter during the two-month campaign, according to an SDF official and relatives who were in contact with residents.

“Thousands are coming back and shops are opening. Today is the first day life is returning to normal,” said Sharfan Darwish, spokesman for the SDF-allied Manbij Military Council told Reuters from the city, adding they were working to restore basic services.

Pro-SDF news sites showed jubilant families who had been trapped in the city during the fighting talking about how harsh life was under Islamic State and its imposition of strict dress codes in public. Their footage showed men shaving their beards and veiled women setting fire to niqabs they were forced to wear in public that covered their entire face apart from the eyes.

The militants were finally ousted after a deal was reached on Friday that secured their departure together with some 2,000 civilians, believed to have been their relatives, toward their stronghold of Jarablus near the border with Turkey, a Syrian from Manbij who is in touch with relatives there said.

It was not clear whether those leaving were hostages or had left voluntarily, a Kurdish source said.

The SDF, formed last year by recruiting Arabs to join forces with the powerful YPG Kurdish militia, launched an offensive with the support of U.S.-led strikes at the end of May to remove Islamic State from areas it controls along the Turkish border.

The loss of Manbij, occupied by Islamic State since early 2014, is a big blow to the militants as it is of strategic importance, serving as a conduit for the transit of foreign jihadists and provisions from the Turkish border.

The operation, in which U.S. special forces played a significant role on the ground, marks the most ambitious advance by a group allied to Washington in Syria since the United States launched its military campaign against Islamic State two years ago.

Darwish attributed the speedy return to life in the city to a military and aerial campaign that he said spared many neighborhoods where thousands of civilians had remained even at the height of fighting.

Despite intensive U.S. bombing of bridges, several hospitals and a large silo in the course of the campaign, the city appears to have been spared the devastation of other cities in the Syrian conflict.

The SDF, which had already cleared over 13,000 mines, was sweeping some neighborhoods in search of militant sleeper cells suspected to still be operating.

A former resident of the city said he had reports from family members that the Kurdish YPG, who are the dominant group within the SDF, had rounded up dozens of young men before screening them because of concerns that some of them belonged to sleeper cells.

The capture of Manbij bolsters the position of Kurds who already control an uninterrupted 400 km (250 mile) stretch of Syria’s northern border with Turkey.

Washington has long lacked capable proxies on the ground, but has found its first strong allies in SDF. Their gains have alarmed rebel forces battling President Bashar al-Assad, who say they will respond with force to any attempt to break up Syria.

Manbij women have been ripping off their burqas and burning them, smoking cigarettes, while men cut off their beards, all while rejoicing at their newly obtained freedom after the Syrian Democratic Forces (SDF) drove jihadists from the Syrian city.

Mass jubilation engulfed the northern Syrian city of Manbij after months of battles and grief. Both residents who had stayed in the city and those who only just returned after hearing the news have been openly expressing joy at getting their homes and freedom back.

Embraces and kisses, happy smiles, and even more happy tears have been seen on Manbij’s streets, as this video and these pictures show, with whole-hearted laughter and words of gratitude heard on every corner.

Children, as children do, played football and enjoyed themselves, albeit in apocalyptic-looking surroundings.

An RT Arabic crew visiting the former Islamic State (IS, formerly ISIS/ISIL) stronghold captured the destruction left by the fighting. Their video shows dozens of homes nearly razed to the ground, piles of debris littering the streets, severely damaged infrastructure riddled with bullets holes, and large holes rent by bombs in almost every building.

“It was complicated for us to save civilians from the area, but we did it. Terrorists are now fleeing. We will go after them no matter where they are heading to,” said one of the female soldiers with the YPJ, which contributed greatly to the liberation of the city, to RT.

During their rule, IS jihadists imposed a hardline version of Islam, mandating strict social restrictions on Manbij’s residents.

SDF soldiers have brought in supplies and are distributing them among the population, adding to the joys of the day.

Celebrations in solidarity with Manbij are also held in other cities across Syria, as these Twitter posts attest.

Arab and Kurdish fighters from SDF announced the full liberation of Manbij on Friday after successfully conducting the final assault on the IS-held al-Sirb neighborhood. During this assault, they rescued some 2,000 civilians who had been abducted by the jihadists as they were being driven out of Manjib to be used as “human shields.” Citing a source from the Syrian army, AFP news agency reported that, while some of the abducted residents were able to escape themselves, some, surprisingly, “were freed” by the fleeing terrorists.

Manbij was a key transit point on the route between the Turkish border and Raqqa, the Syrian city proclaimed capital of the jihadists’ “Islamic caliphate.” The SDF launched its offensive on the city on May 31, with air support from the U.S.-led coalition. The army was able to seize Manjib only two and a half months later, on Aug 6, while still driving terrorists out of some parts of the town. Manbij residents had endured a total of 73 days of constant fighting when the allied forces were driving out the jihadists street by street.