In Ankara and Riyadh, a decent night’s sleep must be hard to come by  nowadays, what with the prospects of the Sunni state they’d envisaged being established across a huge swathe of Syria slipping away in the face of an offensive by Syrian government forces that is sweeping all before it north of Aleppo, threatening to completely sever supply lines from Turkey to opposition forces in and around the city and all but ensuring that its liberation is now a question of when not if. 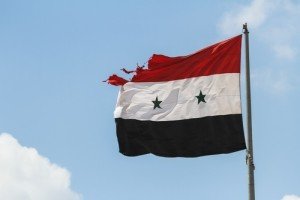 The success being enjoyed by government forces and its allies on the ground is a testament to their remarkable morale and tenacity despite the battering they have endured over five years of unremitting conflict. Key to this reinvigoration and success in routing opposition forces – forces which only a few months ago were in the ascendancy – has of course been Russian air, communications and logistical support. Moscow’s decision to intervene at the end of September last year may have been pregnant with risk, but so far it has been validated, and perhaps even beyond initial expectations. 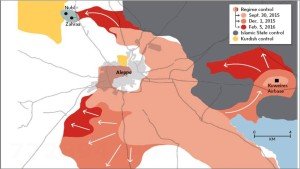 Control of territory surrounding Aleppo (Institute for the Study of War, in Globe and Mail)

Moscow not Washington is calling the shots in the region now, announcing the birth of a multipolar world and marking an astonishing recovery given the parlous state of Russia throughout the 1990s as it struggled to recover from the demise of the Soviet Union. No sooner was the hammer and sickle flag removed from atop the Kremlin than a procession of crazed free marketeers descended from the United States and elsewhere in the West to impose neoliberal nostrums in return for an IMF loan that was necessary in order to avert complete economic collapse. The record shows that rather than this collapse being averted, it was accelerated by the structural adjustment reforms implemented by Yeltsin and other Russian converts to the new religion.

In Washington at the time, ‘end of history’ triumphalism reigned as oh how they laughed. Well, they’re not laughing now.

Regardless, at this stage in the Syrian conflict neither the Russians nor anybody else with a vested interest in the country’s survival as a non-sectarian state will be prepared to predict victory. Not with the noises coming out of Ankara and Riyadh over the possibility of both countries sending in ground troops.

Though they claim that any such troop deployment would be carried out with the objective of confronting ISIS, only those of a gullible disposition who could possibly believe it. In truth, any such intervention would carry with it the primary goal of regime change in Damascus, staving off the complete collapse of opposition forces in and around Aleppo, with Turkey harbouring the additional objective of crushing the Kurdish YPG forces that have been enjoying inordinate success against both ISIS in the north east and rebel forces further west as part of the general tightening of the noose around the city.

Saudi aircraft deploying to Incirlik airbase in Turkey, from where the U.S. has been flying sorties over Syria in recent months, is a significant development, one that indicates the extent of panic in Riyadh at the way the conflict has turned against them since this latest offensive by the Syrian Arab Army and its allies began.

The days when an American president could pick up the phone to Washington’s allies in the Middle East and have his bidding done have passed. The impotence of the Obama administration in the face of these developments has arrived as the culmination of a decade and half of disastrous overreach in Afghanistan and Iraq, leaving U.S. power and credibility severely weakened. Even if the President wished to follow a vigorous and assertive policy towards the region and the conflict in Syria, the cost not just in money but political and public support at home negates it as a serious proposition. In Washington, what was once known as the Vietnam Syndrome is now the Iraq Syndrome.

Russian President Vladimir Putin, on the other hand, is acting safe in the knowledge that his popularity and support at home remains rock-solid, with a consistent approval rating of around 80 per cent making him the envy his Western counterparts. It probably won’t be until historians a generation from now look at this period and crisis, doing so with the benefit of hindsight and distance, that Putin’s political, tactical and leadership skill will be properly appreciated. The same goes for his foreign minister, Sergei Lavrov, who’s reduced his U.S. counterpart John Kerry to the role of a hapless apprentice looking on in awe at the finished article.

Proof of this comes with the outcome of the most recent talks on the conflict in Munich [Feb 11, 12, 2016]. Russia, in the person of Lavrov, arrived with its air campaign proceeding at full tilt and left having reached an agreement that it should continue at full tilt. The speed with which the narrative promulgated by the U.S. and its allies has unravelled as a consequence of Russia’s presence is measured in the way they cling on to the fiction of ‘moderate rebels’. The most grievous example involved British Prime Minister David Cameron during last year’s Commons debate on British participation in the conflict. His claim there were 70,000 of these moderates in Syria, just waiting to install a nice and cuddly liberal democracy in Damascus the morning after Assad is forced out met with howls of laughter everywhere apart from Syria, where Cameron’s ‘moderates’ have turned a large swathe of the country into a living hell.

It bears emphasizing: the only moderates fighting in Syria are the troops of the Syrian Arab Army, made up of Sunni, Shia, Alawite, Druze and Christians. They and their allies comprise the forces of non-sectarianism in the country and the region, engaged in a pitiless conflict against the most reactionary and retrograde current of extremism the world has seen since Pol Pot and the Khmer Rouge were rampaging across Cambodia.

For Saudi Arabia and Turkey, talking tough is one thing, backing it up is a quite another. The world already got the measure of Erdogan after a Turkish jet shot down a Russian bomber a few months ago. The Turkish president went scurrying straight to his NATO allies requesting that Article 5 of its treaty, committing its members to the collective defence of each when under threat, be invoked. His request was denied by Obama and, no wonder, given he’s had reason to doubt Erdogan’s credentials as an ally. Turkey’s attempt to paint the Kurds of the YPG as a terrorist threat to rank with ISIS is not going down well in Washington, where the Kurds are rightly viewed as an invaluable ground component of the anti-ISIS struggle and have been receiving U.S. and Russian air support with this in mind.

With Russia’s military presence in and around Syria entrenched, and with the U.S. increasingly disenchanted with Erdogan’s Janus-faced role in the conflict in Syria, not to mention the bellicosity of its Saudi client over Iran and a human rights record that makes every utterance in support for the kingdom a howl of hypocrisy, we are at the absolute tipping point when it comes not only to Syria’s future but the future of the region. The stakes involved leave no doubt that the mounting threat of a Saudi-led invasion of Syria speeds the hour when Iran and Russia commit their own ground troops in significant number.

The second act of the conflict in Syria is drawing to a close. The third and final act is about to begin.

John Wight is the author of a politically incorrect and irreverent Hollywood memoir – Dreams That Die – published by Zero Books. He’s also written five novels, which are available as Kindle eBooks. You can follow him on Twitter at @JohnWight1 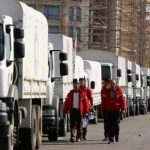 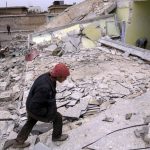 Tide turns in the battle for SyriaMultipolarity