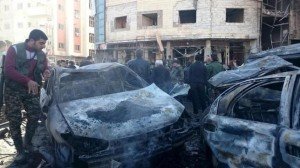 * Feb 1, 2016, 19:20 GMT. The UN special envoy for Syria, Staffan de Mistura, has announced the official start of peace talks between the Syrian government and opposition leaders in Geneva. Mistura has excluded the possibility of setting preconditions for the peace talks. He said that the main objective for now is to keep the indirect talks going and he announced that his meeting with Damascus representatives was scheduled for Tuesday.

* Jan 31, 2016, 20:51 GMT. The Syrian opposition said Sunday’s meeting with the UN envoy had been “very positive,” particularly regarding discussions on the humanitarian situation. “Today’s meeting was very positive with Mr. de Mistura,” the group’s spokesman told reporters. “Things are encouraging and positive concerning humanitarian issues. There will be another meeting tomorrow.”

GENEVA–Syria’s main opposition group is considering a proposal by U.N. special envoy Staffan de Mistura that could pave the way to the delegation pressing ahead with talks after holding their first meeting with him on Sunday, a Western diplomatic source said. Representatives of the Saudi-backed Higher Negotiation Committee (HNC), which includes political and militant opponents of President Bashar al-Assad, had warned earlier in the day that they may yet walk away from the Geneva talks unless the suffering of civilians in the five-year conflict is eased.

With Islamic State bombers killing over 60 people near the country’s holiest Shi’ite shrine, the Syrian government’s chief delegate retorted that the blasts in Damascus merely confirmed the link between the opposition and terrorism – even though Islamic State has been excluded from the talks.

The United Nations is aiming for six months of talks that would focus on achieving a broad ceasefire while working toward a political settlement to the civil war that has killed over 250,000 people, driven more than 10 million from their homes and drawn in global powers.

After the HNC initially insisted air strikes and sieges of Syrian towns must end before it joins the “proximity talks”, in which de Mistura would meet each side in separate rooms, there appeared to be some signs of a softening in their position on Sunday evening. HNC spokesman Salim al-Muslat described discussions with de Mistura as very positive and encouraging “concerning humanitarian issues.” The delegation met for several hours later on Sunday to debate the proposal.

“De Mistura made them a proposition, and that’s tempting them to enter the negotiations. They are very prudent,” a Western diplomatic source said, adding he was not aware of the content of the offer.

The delegation representing the HNC is seeking a halt to attacks on civilian areas, the release of detainees and a lifting of blockades. It has a list of 3,000 women and children in Syrian government jails. The measures were mentioned in a Security Council resolution approved last month that endorsed the peace process for Syria.

“They want tangible and visible things immediately. Things they can give to their grassroots,” the source said. “Certain things aren’t possible immediately like the end of the bombings, but the easiest is the release of civilians, women and children.”

U.N. Secretary-General Ban Ki-moon described the talks – the first in two years – as long overdue. “I urge all parties to put the people of Syria at the heart of their discussions, and above partisan interests,” he said during a visit to Ethiopia.

In Washington, U.S. Secretary of State John Kerry urged both sides to seize the opportunity to make progress. “In the end there is no military solution to the conflict,” he said in a televised statement.

The Syrian government’s delegation head in Geneva, Bashar al-Jaafari, said Damascus was considering options such as ceasefires, humanitarian corridors and prisoner releases, but suggested they might come about as a result of the talks, not before them.  “Absolutely, this is part of the agenda that we agreed upon and that will be one of the very important topics we will discuss among ourselves as Syrian citizens,” Jaafari said.

Opposition delegate Bassma Kodmani said the bombings had increased in the last week. “In preparations for the negotiations, everything has intensified. The sieges have become total,” she said, adding later that her delegation was likely to stay at least three to four days in Geneva.

On Sunday, the United Nations said that Mouadamiya, a rebel-held town of 45,000 on the southwestern edge of Damascus, faced a new siege by government forces.

Moscow has objected to two Islamist rebel groups, Jaish al-Islam and Ahrar al-Sham, taking any part in the talks. However, a negotiator from Jaish al-Islam, Mohamed Alloush, told Reuters he was going to Geneva to show that the Syrian government was not serious about seeking a political solution.

In another sign that talks may gather pace, the Western diplomat and a source close to the opposition said the HNC’s main coordinator Riad Hijab could also arrive on Monday.

Islamic State claimed responsibility for Sunday’s attacks [Jan 31, 2016] in the Sayeda Zeinab district of Damascus, according to Amaq, a news agency that supports the militant group. It said two operations “hit the most important stronghold of Shi’ite militias in Damascus.”

The Britain-based Observatory put the death toll at over 60, including 25 Shi’ite fighters. Earlier, the Interior Ministry had reported at least 45 dead and 110 people wounded, while state television showed footage of burning buildings and wrecked cars in the neighbourhood.

The heavily populated area of southern Damascus is a site of pilgrimage for Shi’ites from Iran, Lebanon and other parts of the Muslim world. The shrine houses the grave of the daughter of Ali ibn Abi Taleb, whom Shi’ites consider the rightful successor to Prophet Mohammad. The dispute over the succession led to the major Sunni-Shi’ite schism in Islam.

Islamic State has been excluded from the talks as the U.N. has classified it a terrorist group. Nevertheless Jaafari said the blasts confirmed the link between the opposition and terrorism, pointing to the attacks and comments from a leader of the Southern Front, another rebel coalition. “This confirms what the Syrian government has said over and over again – that there is a link between terrorism and those who sponsor terrorism from one side and some political groups that pretend to be against terrorism,” he said.

Jaafari added that Damascus favoured “an enlarged national government” as one phase of the process, but made no mention of creating a transitional administration without Assad, as the opposition demands. 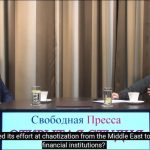 Interview: How did chaos and war arrive on Russia’s border with Ukraine?Multipolarity, Russia, Ukraine 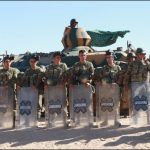