By Fabian Eberhard, in SontagsZeitung, February 8, 2015

Bern/Kiev In the east of Ukraine, neo-nazis are at large. Extreme right-wing fighters of the Ukrainian volunteer regiments are looting homes, torturing captive separatists, and kidnapping reporters: terror in the name of the Maidan revolution. 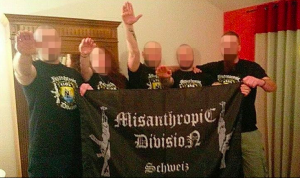 Swiss ‘Hammerskin’ neo-Nazis supporting their counterparts in Ukraine, image from their Facebook as published in SonntagsZeitung

Amnesty International has charged the pro-government bands with serious human rights violations –and they are being supported out of Switzerland. Investigation shows that neo-nazis from the cantons Genf, Waadt, Wallis, and St. Galle maintain tight contact with the extremist fighters and send money and material aid to the front.

Last spring, right wing radicals founded Misanthropic Division Switzerland. The organization acts as direct branch of the same organization in Ukraine. This counts as a brutal union in the fight against the Russian separatists. Their members honor Hitler’s Waffen-SS; many of them are convicted criminals. As the revolution broke out in the Maidan Plaza, they were the first to arm themselves with Kalashnikovs and shotguns.

“Crusade for the survival of the white race”

Today the Misanthropic Division is involved in the fighting over the cities of Donetsk and Mariupol in eastern Ukraine. It is incorporated into the Azov Battalion, which belongs to the most well-known volunteer unit, with nearly a thousand soldiers. Its leader [Andriy Biletsky — tr] is quoted in an interview in the British newspaper, The Telegraph: “The historic mission of our nation in this critical moment is to lead the White Races of the world in a final crusade for their survival.”

The government in Kiev has slowly lost control over the neo-nazi groups. Or it simply does not wish to control them. In contrast to the regular army forces, the militants are highly motivated and do the dirty work at the front.

The backers of the Swiss members of the Misanthropic Division stem from among the neo-nazi network of the Hammerskins [for this network, cf. this link –tr]. The person connecting the activists in Switzerland and their Ukrainian counterparts is known as “B. S.” from Genf, mid twenties, fan of the Middle Ages, tattooed.

On the 21st of December, the group sent 800 Swiss francs direct to the Azov Battallion, as a document shows. This came in part from their sale of T-shirts. Two days after the transfer, the website of the Azov department for support from Switzerland posted “We know that this is just a drop in the sea of solidarity, but we are hoping it will help our comrades in the front. Glory to Ukraine!”

At the same time, “B. S.” put an appeal on his Facebook page: The Swiss Misanthropic Division is organizing a shipment of material for the front. Winter clothing and means of nourishment are welcome. “We are helping the soldiers in their struggle against communist imperialism and for a white Europe,” writes the man from Genf. One month later, there appeared on his Facebook page photos of the materials gathered: uniforms, groceries from Migros, and medicine, ready for use in the war.

The supporters are unwilling to say anything about their connections to the front. They only report: “We do not work with the media and the system.” In associated internet forums, they are already announcing the next cash delivery.

A note on Swiss mercenaries in eastern Ukraine

Support for the Ukrainian militias also comes from right wing extremists in other countries. Dozens of foreign neo-nazis go so far in their solidarity as to actually get to the war. In the Azov Battalion alone there are approximately 100 foreign combatants. Multiple sources assert that extremists from Switzerland have fought, or are fighting, in eastern Ukraine. Individual details are scant, but one of the Swiss mercenaries is probably “B. S.” himself, the Hammerskin member from Genf: photos on his Facebook page show him in Ukraine last November. He also posted on it that he wanted to be counted as “The hero of the Misanthropic Division.”

Such a trip to the front can end there, as happened, for example, to 31-year-old Swedish neo-nazi Leo S. He was a volunteer in the Azov Battalion, and was killed in combat January 8. His comrades called him “Viking.”

In an internet video they show him given last rites with machine gun salvos. They buried him in a hand-made wooden coffin. What remains is one photo of the Swede, laughing, placed on the grave, in the middle of a field, in the middle of nowhere, in east Ukraine.

Sontagszeitung is a weekly, Sunday newspaper in Switzerland. Translated from German by Tom Winter for Fort Russ website.


Translator’s note: Similar news reports are found in several German language newspapers. The above seems to be the source for all of them. The accompanying photos, with faces blurred, are apparently from the Swiss Hammerskin member’s Facebook page, and are screen captured from the Sonntagszeitung article.

Note by New Cold War.org editors: The Toronto Star, Canada’s largest circulation newspaper, has published three articles in the past seven weeks featuring financial appeals for the various front organizations of the extreme-right battalions in Ukraine. The latest article, by foreign affairs reporter Olivia Ward, appeared on the Star front page on February 7. It includes an appeal for funds to ‘SOS Army’. According to that shadowy fund’s website, the funds it collects go toward the purchase of advanced targeting technology for the artillery of Ukraine’s army and allied battalions. This artillery has been shelling towns and cities in eastern Ukraine during the past nine months. Thus does Canada’s leading newspaper find itself in complicity with the war crimes of the Ukraine armed forces and battalion against the civilian population of eastern Ukraine. 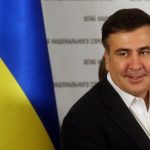 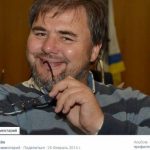