The following is a summary of the results of a survey recently published by The Kyiv International Institute of Sociology (KIIS) The summary is translated and prepared by New Cold War.org. The survey was published in Ukrainian earlier this month and is 31 pages long. 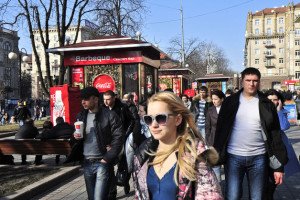 The Kyiv International Institute of Sociology conducted a survey of attitudes of the Ukrainian people in February-March 2015. For comparison purposes, Ukraine was divided into five macro-regions:

The following are some of the key findings of the survey.

This survey attempted to reflect the socio-political moods in Ukraine along with showing the differences in people’s opinions across various regions. A general question about the possible changes of Ukraine’s economic situation in the next year reflected a negative approach with 65.6% of respondents stating that the change will be ‘significant and for the worse’. Only 9.9% of Ukrainians said that the change will be a positive one.

When asked the same question, but with a longer time frame of five years, the opinions proved to be more optimistic with 42.2% stating that the economic situation will change significantly for the better and 23.4% convinced it would change for the worse. Nevertheless, when asked whether generally satisfied with their life, the majority of respondents – 65.6% – were fully or to some extent unsatisfied, and only 10.4% said they were satisfied. 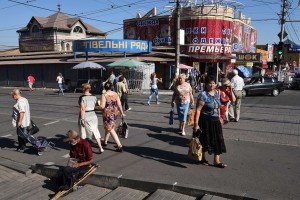 Attitudes to EU and EEU

Opinions in regards to which integration path Ukraine should take reflected a fairly common trend in favor of the European Union. 51.4% of Ukrainians were for the EU integration, and only 10.5% were for the Eurasian Customs Union (ECU). 24.7% were for neither and 13.3% hesitated to respond. A wide spread appeared between the West and the Donbass macro-regions, with 73.7% in the West supporting European Union integration and only 2.7% for the Eurasian Economic Union. IN Donbass, 28.5% were equally for the EU and the EEU. Nevertheless, keeping in mind that the Donbass region included respondents from only those areas that are controlled by the Ukrainian authorities, the results can be seriously skewed.

The war in eastern Ukraine

The main disagreement within Ukrainian society is in regards to the military [“counterterrorist”] operations in Eastern Ukraine. 45.1% of respondents support the operation and 44.0% do not. Again, the West regions showed a high of 64.4% in favor, 27% not in favor, while in Donbass, only 4.9% were in favor and 82.9% were against. When respondents were asked whether they considered the Donetsk People’s Republic and Lugansk People’s Republic to be terrorist organisations, 62.4% were more inclined to claim them as such, whereas 17.3% said they were not. But in government-controlled Donetsk and Lugansk, residents reject the “terrorist” label.

It seems that even though a good number of respondents see the DPR and LPR more or less as terrorist organisations, they are not as eager to support the antiterrorist operations, which leads to conclude that they hope for alternative ways of resolving the conflict. In fact, 70.3% responded in favor of negotiations and peaceful means of conflict resolution in Donbass, with only 20.6% supporting military action. Even in the West macro-region, which seems to have the most negative sentiments towards the LPR and DPR and is most pro-Kyiv government, only 27% responded in favor of military actions with a majority of 60.8% for peaceful negotiations.

Negotiate a settlement of the war?

When asked to specify in regards to what concessions could be accepted in order to settle the conflict, 81.1% spoke out for making Russian the official language of the DPR and LPR, 71.5% for decentralization and expanding rights for these territories, 52.5% for holding local elections, 50.3% for rejecting accession to NATO, and 42.1% for the ability of creating local people’s militias.

The percentage of those against the above mentioned concessions was lower than of those who were in favor. On some more radical concessions, such as granting autonomy to DPR and LPR, Ukraine’s accession to the EEU, recognition of DPR’s and LPR’s independence, recognition of Crimea’s accession to Russia as well as federalization of Ukraine, the higher percentage of respondents, to a larger or smaller degree, was against such.

Overall, then, a solid majority of those surveyed by KIIS want peace at any price. So why has the KIIS survey gone unreported in the West, and why are the U.S., UK and Canadian governments sending in soldiers to Western Ukraine?