Socio-political mood of the people of Crimea, published in Russian by GFK (German polling firm), Feb. 4, 2015 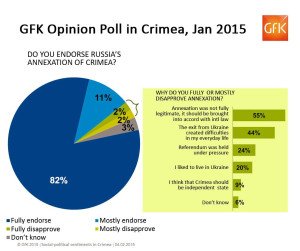 The German market and consumer information firm GFK has published a 31-page survey of Crimean residents that was commissioned by three agencies: Barta Communications, Project for a Free Crimea, and the Canada Fund for Local Initiatives (an agency of the Government of Canada). The survey spoke to 800 residents of Crimea of all ages 18 years and over. Surveying was conducted by telephone from Ukraine between January 16 and 22, 2015. The results are published in Russian here.

Much of the study is devoted to analyzing how Crimeans obtain their news and information, including their attitudes to Ukrainian news sources. See highlihghts of those results further below. Here are some of the published results (translated by New Cold War.org):

The armed conflict in Eastern Ukraine 42%
Inflation, rising prices, unstable exchange rates 40%
Transport isolation of Crimea 22%
Lack of money to live a normal life and not go into debt 19%
Unemployment 15%
Low levels of health care 13%
International sanctions affecting life in Crimea 9%
Corruption and bribery of elected officials 8%
Shortages, reducing the choice of food and other goods 5%
Indifference of the authorities to the problems of ordinary citizens 5%
Confusion over property rights 4%
Crisis of governance, lack of order in the peninsula 3%
Crime, poor performance of law enforcement agencies 2%
Other 2%
None of the above 7%

Change in financial status during the past year: (page 12)
Significantly improved: 21%
Improved: 30%
Remained the same: 35%
Deteriorated: 13% 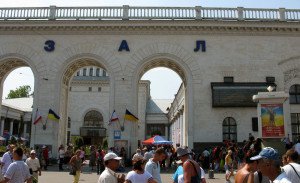 Here is a summary of the GFK report’s findings on Crimeans’ attitudes and practices regarding media:

One of the few Western media outlets to acknowledge the existence of the GFK survey and its uncomfortable results was Bloombeg News. The pro-Ukraine author of the article wrote, “Taken together, these answers suggest that a majority of Crimeans see Ukraine as a poor and unstable country where the media are hostile toward them. That’s largely an accurate assessment that has nothing to do with fear or brainwashing from Moscow.”

On March 16, 2014, Crimeans voted in a referendum on their political future. The referendum was organized by the government of the Autonomous Region of Crimea, the only such regional, autonomous entity in Ukraine, formed in 1994. Eighty three per cent of Crimean adult residents cast a ballot and 97 per cent voted to secede from Ukraine and join the Russian Federation.

Read also:
Another survey showing Crimeans content with the break from Ukraine, March 6, 2015