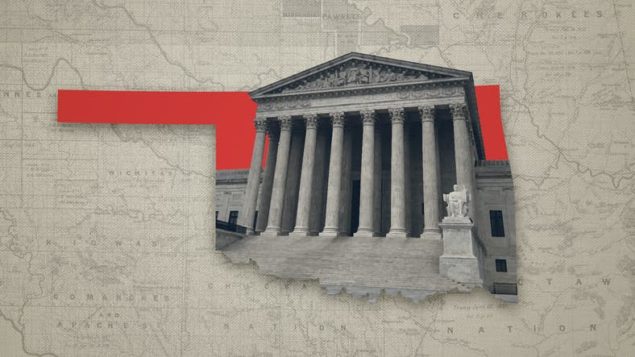 In a decision being hailed as a win for tribal sovereignty, the U.S. Supreme Court ruled Thursday that a large portion of eastern Oklahoma remains a reservation.

Further reading: The Empire of All Maladies by Nick Estes

Published on Indian Country Today, July 9, 2020
_______________________________________
UPDATED: ‘If Congress wishes to withdraw its promises, it must say so’
In a decision being hailed as a win for tribal sovereignty, the U.S. Supreme Court ruled Thursday that a large portion of eastern Oklahoma remains a reservation.In the 5-4 decision, the nation’s highest court said Congress never explicitly “disestablished” the 1866 boundaries of the Muscogee (Creek) Nation.“Today we are asked whether the land these treaties promised remains an Indian reservation for purposes of federal criminal law. Because Congress has not said otherwise, we hold the government to its word,” according to the majority opinion written by Justice Neil Gorsuch.

SCOTUS reaffirmed what we’ve always known: Treaties are the supreme Law of the Land. https://t.co/GRlv44EqPh

Jonodev Chaudhuri, Muscogee (Creek) Nation, said the decision is a huge win for Indian Country and a profoundly impactful day for the tribe.

“Many folks are in tears,” said Chaudhuri, ambassador of the tribal nation. “Despite a history of many broken promises, as is true with many tribal nations, the citizens feel uplifted that for once the United States is being held to its promises.”

Chaudhuri said the decision provides jurisdictional clarity and that the tribe will continue to work to improve the health, safety and welfare of tribal members and non-tribal members alike.

“Creek Nation has a long history of working with its local, state and federal partners to protect the interests of all people in its boundaries and the clarity brought by today’s positions will only enhance that,” he said. 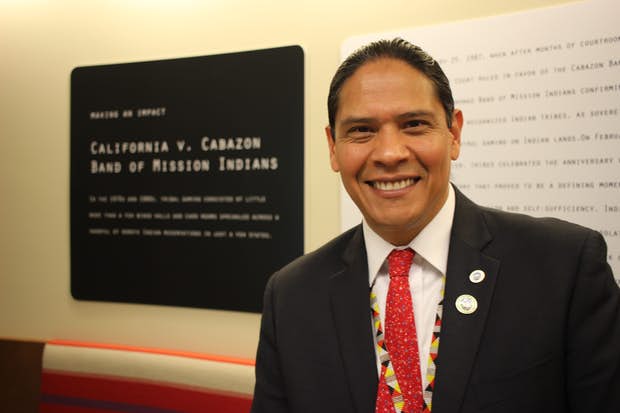 The case has long kept Indian Country on pins and needles through two Supreme Court terms.

John Echohawk, Pawnee and executive director of the Native American Rights Fund said the tribe endured a long and hard fight to protect their homelands.

“In holding the federal government to its treaty obligations, the U.S. Supreme Court put to rest what never should have been at question,” Echohawk said. “We congratulate the Nation on its success.”

Fawn Sharp, Quinault and president of the National Congress of American Indians, joined much of Indian Country in voicing support and congratulations to the tribe for their historic court win.

“This morning, NCAI joins the rest of Indian Country in congratulating the Muscogee (Creek) Nation and proudly asserting that its lands remain, and will forever be considered, Indian country – as guaranteed in their treaty relationship with the United States,” Sharp said in a statement.

The case involved tribal citizen Jimcy McGirt, Seminole, who was convicted of molesting a child but argued state courts lacked authority to try him for a crime committed on reservation

The ruling means his case falls under federal jurisdiction. It does not mean McGirt’s conviction is nullified, rather he should have been tried in federal court under the Major Crimes Act. He is serving a 500-year prison sentence and could potentially be retried in federal court.

Ian Gershengorn, one of the lawyers who argued on behalf of the tribe in the May hearing, said in an emailed statement to Indian Country Today that the Supreme Court upheld promises made by the United States.

“The Supreme Court reaffirmed today that when the United States makes promises, the courts will keep those promises,” Gershengorn said. “Congress persuaded the Creek Nation to walk the Trail of Tears with promises of a reservation — and the Court today correctly recognized that this reservation endures.”

Robert Anderson, a law professor at the University of Washington School of Law, said in the larger scope of things the biggest changes will come in the future with the application of the Indian Child Welfare Act and the federal government prosecuting more cases.

“That’s what they [United States] do in Indian Country all the time, is they prosecute cases where there’s an Indian defendant or whether there’s an Indian victim,” Anderson said. “It’s routine. And the fact that they haven’t been doing that for the last 100 years just shows us that a lot of people weren’t following the law, which is not unusual in Indian law.”

Anderson added he felt Gorsuch was the swing vote among the nine justices.

Anderson, Bois Forte Band of Ojibwe, spoke with Indian Country Today before the decision was handed down. He thought Gorsuch’s questions during arguments in the case indicated he was “very much in the tribe’s camp.”

McGirt v. Oklahoma was granted review by the court and tied to an earlier case heard during the 2018 term. In that case, Carpenter v. Murphy, Gorsuch recused himself as he had already ruled on the case during his time on the 10th Circuit Court of Appeals.

Anderson added that Gorsuch, with his time served on the 10th Circuit Court of Appeals, and Sotomayor, through her own interest and undertaking, are the two justices with the most background and experience in federal Indian law.

At the time, Anderson said they most likely would have some sort of influence over their colleagues.

“It’s just human nature to defer to somebody to some degree who’s an expert in an area, I would hope, even on the Supreme Court,” Anderson said. “It’s interesting that, you know, Justice Gorsuch is a very conservative and Justice Sotomayor is probably the most liberal, and they seem to be on the same page on these Indian law cases, which is great.”

In the minority were Chief Justice John Roberts, along with Justices Clarence Thomas, Samuel Alito and Brett Kavanaugh. Roberts filed the dissenting opinion, joined by Alito and Kavanaugh and Thomas also filed his own.

Roberts wrote that the decision is not warranted and took the view that over the years, Congress disestablished the Creek reservation through a series of statutes leading up to Oklahoma statehood.

“What has gone unquestioned for a century remains true today: A huge portion of Oklahoma is not a Creek Indian reservation,” Roberts wrote.

At the May hearing in the case, several justices raised concerns that a ruling in favor of the tribe could have broad jurisdictional ramifications on things like taxes and other criminal cases. But Gorsuch indicated that so far, no signs of major consequences had emerged.

In the opinion, Gorsuch wrote that the federal government promised the Muscogee (Creek) Nation a reservation in perpetuity. While the reservation has been diminished over time, it was never explicitly disestablished.

“Yes, promises were made, but the price of keeping them has become too great, so now we should just cast a blind eye. We reject that thinking. If Congress wishes to withdraw its promises, it must say so. Unlawful acts, performed long enough and with sufficient vigor, are never enough to amend the law,” Gorsuch writes. “To hold otherwise would be to elevate the most brazen and longstanding injustices over the law, both rewarding wrong and failing those in the right. The judgment of the Court of Criminal Appeals of Oklahoma is Reversed.”

This story is breaking, stay tuned for more updates and information at indiancountrytoday.com

Kolby KickingWoman, Blackfeet/A’aniih is a reporter/producer for Indian Country Today. He is from the great state of Montana and currently reports and lives in Washington, D.C. Follow him on Twitter – @KDKW_406. Email – [email protected]