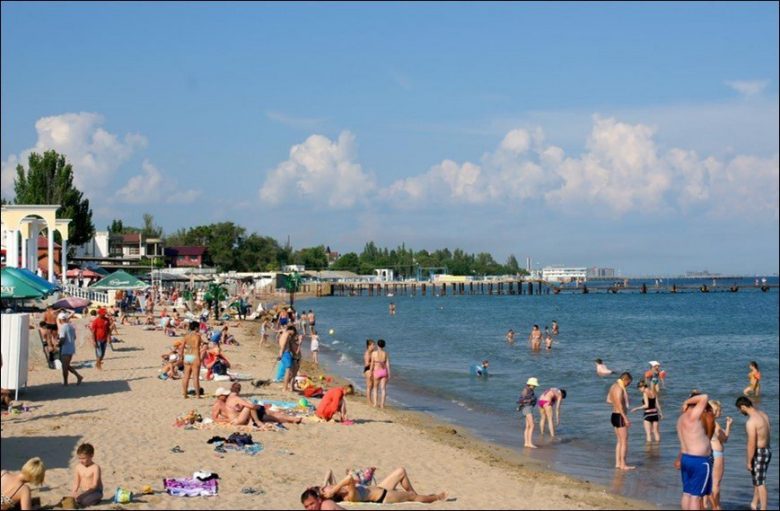 (This article originally appeared in the Russian weekly newspaper ‘Arguments and Facts’. Translation to English by A Socialist In Canada, original in Russian here)… The way south along the M4 Don Highway [Moscow to Rostov-On-Don and beyond] in the summer of 2022 is full of current legends. Some talk about endless tank columns, others about flocks of helicopters scurrying over their heads, still others claim to have seen with their own eyes Ukrainian saboteurs sneaking into Russia through the bushes.
________________________

Evpatoria, CRIMEA–The way south along the M4 Don Highway [Moscow to Rostov-On-Don and beyond] in the summer of 2022 is full of current legends. Some talk about endless tank columns, others about flocks of helicopters scurrying over their heads, still others claim to have seen with their own eyes Ukrainian saboteurs sneaking into Russia through the bushes.

Arriving at the Kerch Bridge on the mainland side, a “traffic jam” has formed – far from the most significant we encountered along the way – caused by selective inspection of vehicles. Passing it without incident, we enter the always friendly Russian peninsula of Crimea. 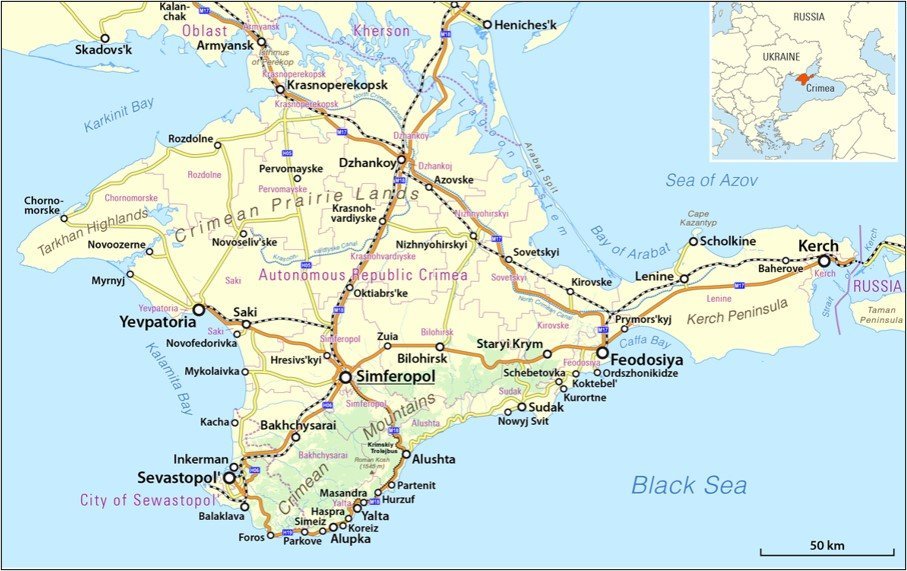 There is no longer any shame in showing the new Tavrida Highway [Russian Federal Highway A291, east-west across the south of Crimea] to foreigners. Construction began in 2017. From Kerch to Simferopol, you travel with the breeze, keeping yourself within the speed limit with difficulty because the car seems to rush forward under its own steam. Brand new gas stations with restaurants, playgrounds and even public showers are also pleasing to the eye.

The idyll ends 35-40 kilometers before Evpatoria (city of 100,000, located on the west coast of Crimea, app. 60 km north of Sevastopol). Here, road construction is in full swing. For now, drivers have to be content with old repaired roads, less comfortable than the roads with new pavement. But for anyone who has been in Crimea during the last five or six years, the progress is obvious.

On the way through Saki, you begin to look around especially carefully: an emergency at the military airfield nearby happened literally on the eve of our arrival. But nothing betrays this from the outside: the locals routinely sell peaches and other fruit in the town and by the roadside, while vacationers try to use every minute of their holidays to the fullest.

The fact that the holiday season is not as successful as in previous years is recognized by the Crimean authorities. The airport at Simferopol (the capital city of Crimea) is closed, and it is very difficult to get tickets for trains. It seems there are more tourists in automobiles than usual. “There are no timid ones here,” said 43-year-old Vladimir from St. Petersburg, who arrived in Evpatoria with his wife and two children. “The timid ones stayed at home!”

Evpatoria gives the impression of a city to which civilization has returned after a long period of neglect. On the shores of the Black Sea, with its amazing purity and warmth, there are a huge number of boarding houses and sanatoriums dating from the Soviet era. During the years under Ukrainian rule, these were operated according to the principle ‘Après moi, le déluge’ [the nihilist expression coined by King Louis XV of France saying ‘who cares?’ about the future world once a leader dies]. As a result, these tourist lodgings resemble dilapidation turned into picturesque ruins.

“Well, today you can’t compare,” says Igor, who takes vacationers on boat rides in the ocean and offers parachute flights. “Now, life has become much more fun, there is hope!”

‘Now’ is the last eight years. After Crimea joined Russia in March 2014, construction in Evpatoria began to boil over. This applies both to the holiday resort area and to the high-rise apartment blocks. New residential complexes are rising up while new schools and kindergartens are opening. “In 2014, it seemed that 100 percent of people voted for Russia,” Igor continues, “The ballots had only just been taken away when the festive fireworks began.”

One of Igor’s clients talks about the military operations taking place in Ukraine and recent explosions at the local military airfield, but Igor shrugs his shoulders. “Come on, they’re just doing their jobs!”

It’s true: sitting one evening on the embankment in a cafe called ‘Sushi Vesla’, you watch how, one by one, the military aircraft busily take off towards the territories to the north that have yet to be denazified. And all this to the sound of the café playing the immortal hit by the French singer Joe Dassin as performed by a saxophonist.

The news that on August 19 an object was shot down by Russian air defense forces over Evpatoria reached many vacationers only through social media on Telegram. That day, a thunderstorm swept over the resort, causing a downpour. The flooding of the streets caused much more concern among the locals than the nearby work of the Russian military.

Along with everything else in Evpatoria, there are many recreation facilities for children. Some are for improving the children’s health, while others are sports camps. There have been no changes in the daily routine of children’s camps in connection with recent events.

There are several foreshore embankments in Evpatoria, but evening festivities take place daily on the main Gorky embankment. The crowd of people there is such that you involuntarily think: if it’s like this in a not-so-successful tourist season, what happens in a successful one?

A cover band playing hits on the waterfront announces: “And now for our guests from Odessa, Viktor Tsoi ‘s ‘Cuckoo’!” Unfortunately, the visitors from Odessa did not want to communicate. It was very interesting to wonder how these ‘former’ residents of the ‘pearl by the sea’ managed to get to Evpatoria.

Of course, no one is going to pretend that nothing is happening. But to cause a state of panic, the insecurity in the Zelensky gang (in Crimea, this is perhaps the mildest description of the Kiev Führer) is not up to the mark.

“We know what all this is for and why,” says Igor, “and, if necessary, we’ll take up arms ourselves. But we’re sure our guys will cope!”

I ask Vladimir from St. Petersburg a question: “And if they do something with the Crimean bridge, how will you get out?”

“It’s unlikely, replies the resident of the city on the Neva. “But if something happens, we can travel through the Kherson region. The people there are on our side. In general, I’m sure the Motherland will protect us in these difficult times.”

It seems that in Crimea there is even more confidence among the people than in Moscow.

In the evening, after the air defense was activated on the embankment, an agitated man rushed toward me, a recently arrived vacationer by all appearances. “Tell me,” he began. I was prepared to hear a question about the phone number of the Ministry of Emergency Situations and how to quickly leave the city, but the man asked where he could buy a bottle of good Crimean wine. I pointed him in the right direction, and nodding gratefully, he hurried on.

Dossier on Western pressures to open farmland in Ukraine for leasing and privatizationDossiers, Ukraine 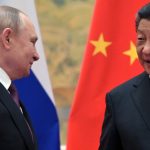