Turkish authorities have arrested two people for the suicide bombing

ISTANBUL — A suicide bomber detonated a bomb in the heart of Istanbul’s historic district on Tuesday, killing 10 foreigners — most of them German tourists — and wounding 15 other people in the latest in a string of attacks by the Islamic extremists targeting Westerners. 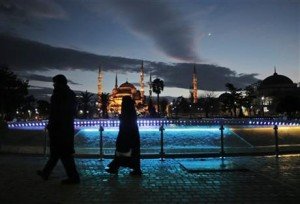 In background is the Sultan Ahmed Mosque in Istanbul, also known as the Blue Mosque (Lefteris Pitirakis, AP)

The blast, just steps from the historic Blue Mosque and a former Byzantine church in the city’s storied Sultanahmet district, was the first by IS to target Turkey’s vital tourism sector, although IS militants have struck with deadly effect elsewhere in the country.

Turkish Prime Minister Ahmet Davutoglu said the bomber was a member of IS and pledged to battle the militant group until it no longer “remains a threat” to Turkey or the world.

Davutoglu described the assailant as a “foreign national,” and Deputy Prime Minister Numan Kurtulmus said he was a Syrian citizen born in 1988. However, the private Dogan news agency said the bomber was Saudi-born. Kurtulmus said the attacker was believed to have recently entered Turkey from Syria and was not among a list of potential bombers wanted by Turkey.

“Turkey won’t backtrack in its struggle against Daesh by even one step,” Davutoglu said, referring to IS by its Arabic acronym. “This terror organization, the assailants and all of their connections will be found and they will receive the punishments they deserve.”

Eight Germans were among the dead and nine others were wounded, some seriously, German Foreign Minister Frank-Walter Steinmeier told reporters in Berlin. The nationalities of the two others killed in the blast were not immediately released, but both were foreigners. The wounded also included citizens of Norway, Peru, South Korea and Turkey.

“I strongly condemn the terror incident that occurred in Istanbul, at the Sultanahmet Square, and which has been assessed as being an attack by a Syria-rooted suicide bomber,” President Recep Tayyip Erdogan said.

Merkel pledged Germany would continue its fight against terrorism.

“Today Istanbul was the target, before Paris, Copenhagen, Tunis, and so many other areas,” she told reporters in Berlin. “International terror changes the places of its attacks but its goal is always the same — it is our free life, in free society. The terrorists are the enemies of all free people, indeed, the enemies of all humanity, whether in Syria or Turkey, in France or Germany.”

The impact of Tuesday’s attack, while not as deadly as two others last year, was particularly far-reaching because it struck at Turkey’s $30 billion tourism industry, which has already suffered from a steep decline in Russian visitors since Turkey shot down a Russian warplane near the Syrian border in November.

Its apparent links to Syria also threatened to have implications in a country that is already dealing with more than 2 million Syrian refugees and a wave of migrants from Syria and other countries pouring across Turkey to Europe.

“By striking in the heart of Istanbul’s old city, which has many … tourists, but few Turks, (IS) is targeting Turkey’s lucrative tourism industry,” said Soner Cagaptay, an expert on Turkey at the Washington Institute.

Cagaptay said that by targeting Germans, Islamic extremists also seemed to be aiming to heighten an anti-refugee backlash in Europe and deepen the anti-Islam sentiment there.

The explosion, which could be heard in several neighborhoods, was at a park that is home to a landmark obelisk some 25 yards (meters) from the Blue Mosque. Nearby monuments include the Ottoman-era Topkapi Palace and the former Byzantine church of Haghia Sophia, now a museum.

Berlin travel agent Lebenslust Touristik said that “many people” that it had booked on a tour were among the dead and wounded. Overall there were 33 people on the tour, the agency said, adding that it was working closely with the German Foreign Ministry to help the victims and their families.

Among the wounded was Jostein Nielsen, a 59-year-old Salvation Army officer from Norway who was sightseeing with his wife when the bomb went off, striking him in the knee with shrapnel.

“I first heard a bang that I think is what detonated the bomb,” Nielsen told Norway’s TV2, speaking from his hospital bed. “After that came the real bang. … There were human remains all over the place.”

Erdem Koroglu, who was working at a nearby office, told NTV television he saw several people on the ground following the blast.

“It was difficult to say who was alive or dead,” Koroglu said. “Buildings rattled from the force of the explosion.”

Halil Ibrahim Peltek, a shopkeeper near the area of the blast told The Associated Press it had “an earthquake effect.”

“There was panic because the explosion was violent,” he said.

The Islamic State group has repeatedly threatened Western targets, with its first major attacks claimed a year ago in Paris on the Charlie Hebdo satirical newspaper and a kosher supermarket.

Two attacks last year targeting a major museum and beach resort in Tunisia left scores dead, nearly all Western tourists. IS also claimed the downing of a Russian jetliner carrying Russian tourists from the Eygptian beach resort of Sharm el-Sheikh that killed all 224 on board.

In the case of Tunisia and Egypt, the response of many Western governments was to issue safety warnings for citizens considering travel to the countries, which rely heavily on tourism revenues. Turkey is equally reliant on tourism, and Istanbul has been among the world’s most visited cities.

Last year, Turkey agreed to take a more active role in the U.S.-led battle against the IS group. It has opened it bases to U.S. aircraft to launch air raids on the extremist group in Syria and has carried out a limited number of strikes on the group itself.

It has also moved to tighten security along its 900-kilometer (560-mile) border with Syria in a bid to stem the flow of militants.

In Washington, U.S. State Department spokesman John Kirby condemned Tuesday’s attack and pledged to work with Turkey to combat the Islamic State group. “The United States reaffirms our strong commitment to work with Turkey, a NATO ally and valued member” of the coalition fighting IS “to combat the shared threat of terrorism,” Kirby said in a statement.

The attack comes at a time of heightened violence between Turkey’s security forces and militants linked to the outlawed Kurdistan Workers’ Party, or PKK, in the country’s mostly Kurdish southeast.

More than 30 people were killed in a suicide attack in the town of Suruc, near Turkey’s border with Syria, in July. In October, two suicide bombs exploded outside Ankara’s main train station as people gathered for a peace rally, killing more than 100 in Turkey’s deadliest-ever attack. .

ISTANBUL — The blast shortly after 10 in the morning reverberated for miles across the neighbouring districts and the Bosphorus Strait, all the way to the Asian side of Istanbul, a picturesque 20-minute ferry ride away.

It shook the ground under the feet of Mehmet, a local chestnut seller in his early 20s, who had left home in high spirits that morning. The warm, sunny weather, he hoped, would draw in the tourists and help him make a little extra money before a predicted snowfall later in the week. He said he was just a couple of hundred yards away from the explosion when it happened, although he was facing in the opposite direction and saw only its aftermath.

Then there was a pungent smell, like burning plastic, that lingered for more than an hour despite the wind, and smoke that filled Sultanahmet Square, home to several of the city’s most prized attractions. A suicide terrorist, who authorities later said was either a Syrian or a Saudi national affiliated with the Islamic State, had detonated his vest next to a group of German tourists by the Egyptian obelisk. Ten died on the spot, 15 others were wounded, some critically.

In seconds, the merry din of tour guides lecturing and crowds taking selfies changed into the sights and sounds of a war zone: Heavily armed police with assault rifles descended upon the square (one police car overturned in the hurry to get there), followed by wailing ambulances and medics in white protective suits who came to pick up the bodies and body parts strewn across the cobblestones.

Despite quickly imposed restrictions on media reporting from the scene and the abundant police tape that, as of Tuesday evening, still prevented visitors from getting near, the news and the gloom spread quickly. In a city that depends heavily on tourism – the fifth most-visited city in the world, according to MasterCard’s 2015 Global Destination Cities Index – such an attack in the beating heart of its tourist district counts among many locals’ worst nightmares.

Germans were the largest national group of foreign tourists in Turkey in 2015. Russians were the second-largest group of visitors to Turkey until a loud spat between the governments of the two countries.

Like many others working in the popular tourist district, Mehmet was overcome by contradictory emotions while watching the tourists scatter in shock and hide in their hotels: gratitude to be alive and unharmed, and sadness at the possibility of having to find another job.

“I thank God I am alive,” Mehmet said, reflecting on the attack on Tuesday afternoon, his full cart next to him in a small cobblestone street, a few hundred yards away from the nearest police line.

“[But] the war is here,” he lamented. “It was already bad before, with the Russian tourists going away; now nobody will want to come here. Our livelihood is gone.” 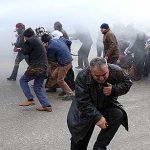 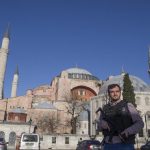