The Trump administration’s protectionist measures on trade are piling up — and so are the retaliatory moves from a spate of other countries. What began with small-scale U.S. tariffs on washing machines and solar panels has now broadened to include steel and aluminum from all over the world, plus hundreds of products from China. Those tariffs have prompted a tit for tat response from affected countries, which target key U.S. exports such as bourbon, motorcycles, and orange juice. And there could be more to come, with the Trump administration studying further tariffs on imported cars and threatening much more action against China.

Here’s how the U.S. tariffs and international reprisals stand

Amy Cheng is an editorial intern at Foreign Policy. (@Amy_23_Cheng)

Humza Jilani is an editorial intern at Foreign Policy. (@humza_jilani)

Amy Mackinnon is an editorial intern at Foreign Policy. (@ak_mack) 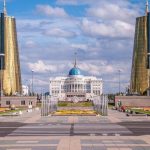