A Levada Center poll published last month shows that a growing number of Russian citizens regard former Soviet leader Josef Stalin in a positive light. Forty-five percent of respondents said that the sacrifices of the Soviet people under Stalin’s rule were justified, whereas two years ago that figure was only 25 percent. And 39 percent of respondents now describe their feelings toward Stalin as “admiration,” “kind regards,” or “sympathy.” How is it possible that one of the bloodiest dictators in human history has gained in popularity? 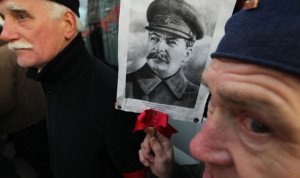 It is true that under Stalin’s rule, the Soviet Union was transformed from an underdeveloped, agrarian country into a military superpower that defeated Nazi Germany and rivaled the United States for world domination.

But this transformation was accomplished through massive state violence and bloodshed. Stalinist methods included mass deportations, incarcerations and executions.

Millions of Soviet citizens suffered arrest, starvation or death as a result of Stalinist policies. While Stalin modernized the Soviet Union and indeed changed the course of world history, he did so at tremendous human cost.

Even in the realm of economic development, Stalin may have done more harm than good. His collectivization drive was accompanied by the deportation of nearly 2 million peasants.

The disruptions of collectivization combined with grain requisitions triggered a horrific famine in 1932-33 during which an estimated 6 million people — Ukrainians, Kazakhs, Russians and members of other nationalities — starved to death.

In the wake of the famine, industrial growth ground to a halt. Even after factory production recovered in the mid-1930s, it continued to be hindered by Stalin’s persecution of managers and engineers. With the Great Purges of 1937-38, economic growth again faltered.

Admiration of Stalin is based above all on his role leading the Soviet Union to victory in World War II. Indeed, the Soviet Union played by far the leading role defeating Nazi Germany; in the process it saved Europe and the world from fascism.

But a closer examination of the historical record reveals that Stalin’s policies greatly hindered Soviet defense efforts at the beginning of the war. Nearly half the officer corps of the Red Army was executed during Stalin’s purges. The result was a shortage of experienced officers and the loss of leading commanders.

Equally disastrous was Stalin’s failure to prepare the country on the eve of the war. His insistence that the Soviet armed forces maintain an offensive military posture meant that troops and equipment were dangerously close to the frontier.

He then ignored warnings of British and Soviet intelligence that a Nazi invasion was imminent. As a result, thousands of Soviet planes were destroyed on the first day of the war. Tens of thousands of Soviet troops were captured even before they knew the war had begun.

Nazi forces quickly reached the outskirts of Moscow and Leningrad. It was thanks to enormous sacrifices on the part of the Soviet people that the Nazi advance was stopped and reversed.

But the war was won at tremendous cost. Particularly during the first two years of the war, Red Army soldiers were fighting Nazi tanks, planes and artillery with little more than rifles and hand grenades. Entire units of the Red Army were wiped out.

Civilian casualties were equally appalling, as the depleted Soviet air force could do little to counter Nazi bombers. Some 27 million Soviet citizens were killed in the war — a victory, yes, but not a victory for which Stalin deserves to be honored.

So the question remains, why do increasing numbers of Russians admire Stalin? I believe this growing admiration says little about the past and a great deal about the present. Indeed, we all view the past through the lens of the present. So the real question is this: What about Russia’s current international standing makes some Russians nostalgic for the Stalin era?

Russia’s position in the world today began to take shape at the end of the Cold War. Negotiating German reunification in 1990, U.S. Secretary of State James Baker assured former Soviet leader Mikhail Gorbachev that NATO would not expand eastward.

Subsequently, George Kennan, architect of America’s Cold War containment policy, warned against NATO expansion as a “fateful error” that would “impel Russian foreign policy in directions decidedly not to our liking.”

But U.S. Presidents Bill Clinton and George W. Bush ignored this warning. Over Russian objections, Poland, Hungary and the Czech Republic joined NATO in 1999. And during a further round of NATO expansion in 2004, seven more Eastern European countries joined, including former Soviet republics Estonia, Latvia and Lithuania. By that point, Russia faced what it regarded as a hostile military alliance right on its border.

Fears of future Russian belligerence led to NATO expansion, which in turn fueled President Vladimir Putin’s aggressive responses to the possibility of further NATO expansion in Georgia and Ukraine. His annexation of Crimea and military intervention in eastern Ukraine subsequently seemed to justify American distrust of Russia. The outcome has been a vicious circle of mistrust and enmity.

Current American-Russian antagonisms have not yet reached the point of a new cold war — the two sides do not have diametrically opposed ideologies locked in a struggle for world domination.

But in the context of Russia’s diminished international standing and renewed American hostility, it is not surprising that both the Putin government and many Russian citizens look more favorably on the Stalin era — a time when Russia was respected, even feared; a time when Russia’s power was growing, not contracting; a time when Russia vanquished Nazi Germany and became a world superpower. 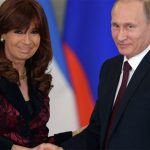