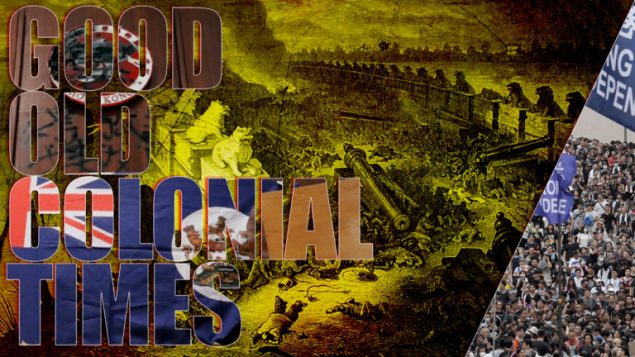 Five years after the “umbrella revolution”, Hong Kong residents have taken to the streets with the new force. This time they are struggling against the law on the extradition to mainland China.

As in 2014, the Chinese authorities blame the West for organizing the protests. And they have a point. Against the background of rising the People’s Republic of China (PRC) on the world stage and the escalation of Chinese-American relations, attempts to destabilize this region will become more frequent. However, China provided these opportunities for destabilization to its “overseas friends” back in 1997. 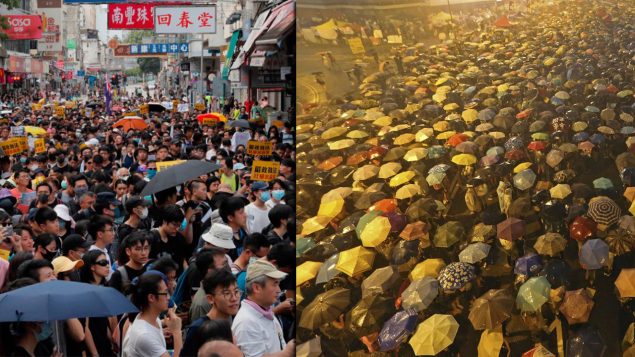 For more than hundred years, Hong Kong was a British colony and served a purely economic function. The authoritarian consultative regime was as far from liberal democracy as the regime in Beijing. The local population was seen as a trading post service class, and political rights the province of various key personnel: lawyers, financiers, traders, and others. The colony served as a financial staging post between the PRC and the capitalist world. Stable financial flows were formed, a significant part of them is still controlled and used by the UK.

In 1997, the British authorities transferred the city back to China. Favoring Hong Kong’s Western system of government, the Chinese leader Deng Xiaoping formed a special autonomous region there and granted a 50-year transition period before Hong Kong fully comply with Chinese rule. The idea known as «one country – two systems», according to which Hong Kong can have its own capitalist economic and political system while maintaining the principle of united China. 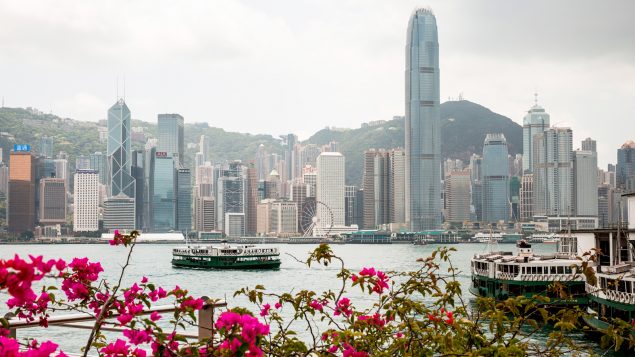 Today, Hong Kong is one of the largest Asia-Pacific financial centers. It has its own laws and currency, and the rights and freedoms of its residents are protected better than mainland Chinese.

Despite this, locals repeatedly protested against the Beijing authorities. Unlike the 2014 events, this year the protests were more violent, and for the first time the colonial flag has been hung in the parliament. On June 16, almost two million citizens took to the streets, according to the organizers – more than a quarter of the autonomy’s population. It is noteworthy that the demands of the protesters are inconsistent with their actions. They demanded the withdrawal of the bill, but it had been postponed «for an indefinite period» on June 15, the day before the so-called protests peaked. They demanded apologies from Carrie Lam – she did it twice, through the press office and to the camera directly. They demanded her resignation, but it would not help their cause. Anyone who would replace her would also be selected by Beijing. 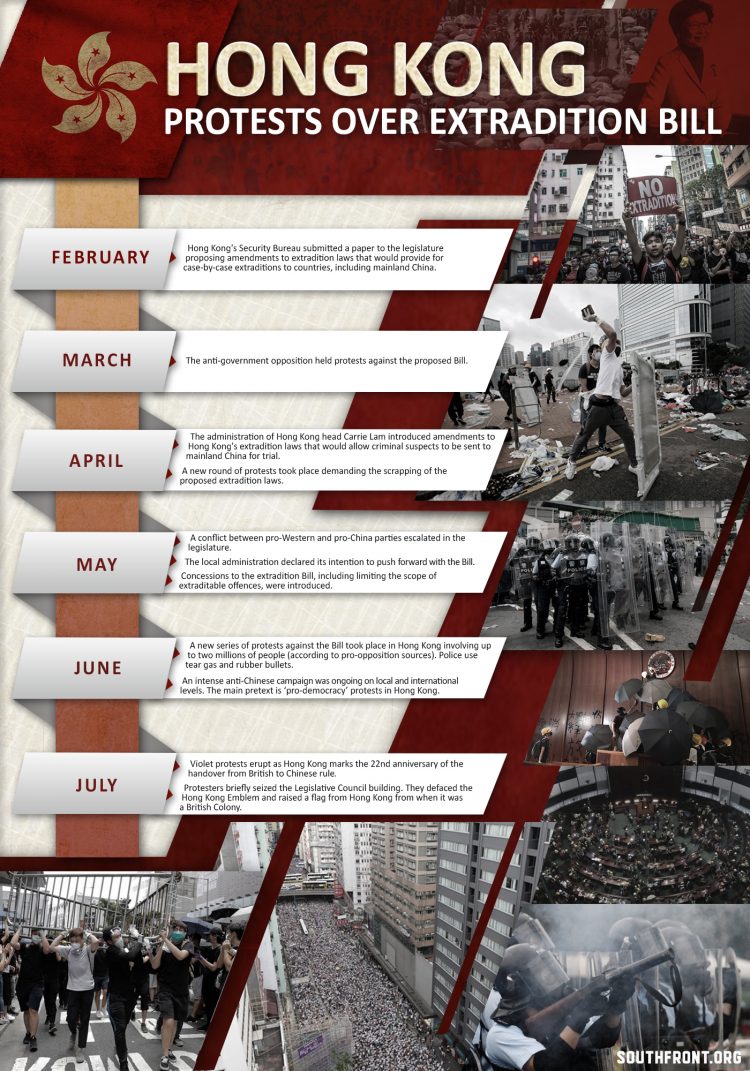 Obviously, the case is connected with the West’s discontent with the growing power of PRC and its independent policies. The US is expressing its discontent by sending clear and unequivocal signals like the «umbrella revolution» and the latest protests in Hong Kong. By «exposing authoritarian tendencies» and human rights abuses, the West wants to undermine China’s image as an international actor. In addition, the decline in democracy in Hong Kong would make the financial sector less transparent and manageable for foreign capital. The imperialists hope to embolden the capitalist class to become more aggressive and demand the abolition of socialist norms, including the overturn of the leading role of the Communist Party.

Non-governmental organizations traditionally are used to destabilize the socio-political situation. China has allowed them almost unlimited access in Hong Kong for decades.Unrest has been imminent since 1995, when the US State Department substantially enhanced the number of diplomatic missions in the city. After the years of preparation, NGOs managed to bring the people into the streets in 2014, who initially advocated universal suffrage and then moved on to demand independence from the PRC. Among NGOs that finance subversive activities in Hong Kong, the National Endowment for Democracy (NED) is the most prominent. In 2018, NED granted $200,000 to the National Democratic Institute (NDI) to «facilitate engagement on Hong Kong’s growing threats to guaranteed rights», $155,000 to the Center of Solidarity (SC) to «raise public awareness and promote participation in worker rights issues» and $90,000 to Hong Kong Justice Center (HKHRM) to «increase the international community’s awareness of human rights abuses in Hong Kong through advocacy». Months before the «umbrella revolution» in 2014 one of its leaders Martin Lee spoke in Washington to NED calling for material and political support for the upcoming demonstrations. The same took place on the eve of recent protests – on May 14 and on June 3, 4 and 11 NED held conferences on «new threats to civil society in Hong Kong» and «challenging the spread of China’s repression model within and beyond its borders».

«Promoting democracy» has become a cover for attacks on the sovereignty of countries all around the world. Before analyzing the Hong Kong protests, let’s turn to history and consider the times when the so-called authoritarian regimes compromised with the West. When Gaddafi agreed to negotiations, this was used to spread agents inside Libya who began funding of opposition networks. Soon the middle class of the large cities of Libya began to consider their gains to be insufficient and Gaddafi as an obstacle. Artificially inflating social problems helped to raise the masses and overthrow the Libyan government. When in 2011 the Western coalition began to bomb government forces, Muammar Gaddafi recalled how he had met the international community voluntarily in 2003. The same happened to Iraq. Despite the Iraqi command accepted the terms of peace, uprisings began in the country. Saddam Hussein provided open access to foreign agents when he let a UN Special Commission into the country. The Commission was to find out whether Iraq possesses WMD, but as UN admitted later, the inspectors passed on information to American intelligence services. It is not surprising that now Iran and the DPRK are refusing to make concessions to the West. 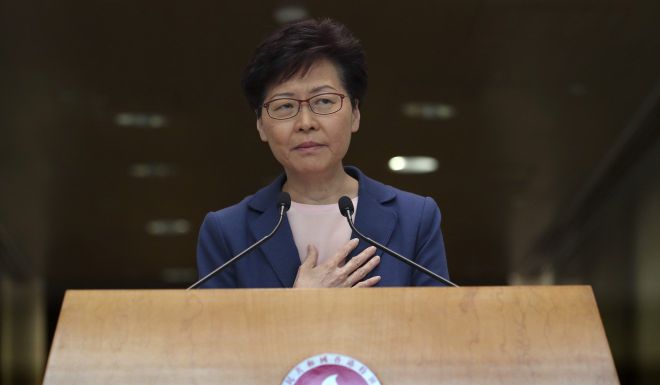 The United States and Great Britain hope to use Hong Kong for political gains against China as they did 150 years ago. However, today they are not facing a backward feudal dynasty. Given the scale and diversity of China, as well as the traditional endurance of the authorities, there is no doubt the Hong Kong’s integration into the PRC will be implemented. Representatives of local businesses are strongly associated with mainland China and are in favor of subsequent integration, and without the support of business structures the ardor of the protesters will inevitably subside. In 2047 Hong Kong will become completely Chinese while retaining its own specifics. The question is, will Anglo-Saxon influence remain there?